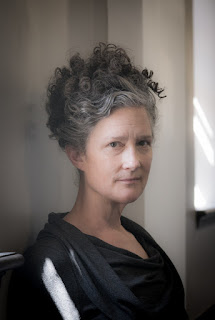 Carrie Brown is the author of the new novel The Stargazer's Sister, which focuses on the life of astronomer Caroline Herschel. Brown's other novels include The Last First Day and The Rope Walk, and her work has appeared in a variety of publications, including The Southern Review and One Story. She teaches at Deerfield Academy in Massachusetts.

Q: Why did you decide to write a novel about Caroline Herschel, and what did you see as the right balance between the historic and the fictional?

A: My introduction to the Herschels, born 12 years apart in the late 1700s in what is now northern Germany, came in the most glancing way: a three-minute radio broadcast from the program StarDate, produced by the McDonald Observatory in Austin, Texas.

I happened to catch the program one morning driving my kids to school and learned that William had been assisted throughout his extraordinary career as an astronomer by his younger sister, Caroline: she was less than five feet tall, her face scarred by smallpox, and she had little formal education.

When she was 22 years old, William rescued her from what likely would have been the sad fate of a spinster daughter at her mother’s beck and call and brought her to England to help him.

That three-minute radio program, with its poignant information about Caroline – standing at her brother’s side night after night, even in the coldest weather, feeding him from her hand, so that he would not be required to move his eye from the eyepiece of the telescope -- was for me the equivalent of what Nabokov called the “divine detail,” or what Henry James called the “rich principle of the note.”

Out of such details a whole world -- no matter how far vanished -- might be built or restored.

As the writer Thomas Mallon has said, in the term “historical fiction,” nouns always trump adjectives.

I set out with The Stargazer’s Sister to write a novel, not a biography – I’d be no good at the latter, frankly; I enjoy the imaginative exercise and freedom of a novel -- and in writing the story I made various changes, large and small, to the historical record, trying to tell the story artfully. (V.S. Naipaul famously said, “It’s all in the art; you get no credit for living.”)

Still, though, despite changing dates, conflating or inventing secondary characters, omitting events and imagining others, I wanted to stay close to what felt to me like the heart of Caroline’s life, which was that serving as her brother’s assistant was the best thing that could ever have happened to her … but that it was not without emotional complications for her. 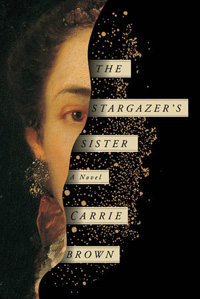 Yet for all the changes – omissions and inventions – I tried to capture the truth of what felt to me from the first most intriguing and most moving about Caroline’s life: that she loved her brother, that she admired him and served him and his endeavors with unquestionable loyalty and energy and intelligence … and that her devotion came at a certain complex cost to her.

Her life ran alongside his, and their parallel tracks were rarely divided by distance of any significance in terms of time or space, but their lives were not the same life, and for all their closeness, their experiences occurred in very different universes.

Q: How would you characterize the relationship between Caroline (Lina) and her brother William?

A: I was interested in the different sorts of expectations William and Caroline had for each other – because of their relative experience in the world, because William was older and a man -- and how that imbalance between them informed their emotional relationship.

I was struck by the fact that precisely because William rescued her, she would be forever in his debt – that’s a complicated circumstance. No matter what she did for him, in some ways it would never equal what he did for her.

And she would always be dependent on him, while he would always have his independence and authority in the world. This is not new terrain for women, of course, nor for novels about women, but that difficulty at the heart of their relationship was nonetheless rich material for a writer.

And as I learned more about them, I was equally intrigued by the ways in which their relationship succeeded, despite that difficulty.

They were a product of their times, but they also transcended their times, breaking free of many of the unwritten and unspoken rules and expectations that governed the lives of men and women. They were both rule breakers in their own ways.

In the end, I think the novel is about work – the challenges and joys and frustrations of work, especially work at that takes place at any sort of frontier – and it’s about love. Their love story isn’t a conventional one by any stretch, but it is absolutely a love story, nonetheless. 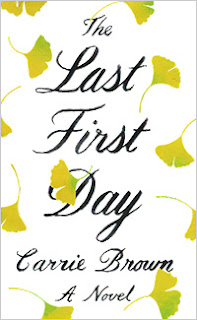 Q: Caroline was an astronomer too, although her brother was better known. How did you choose the book’s title, and what does it signify for you, particularly about the role of women in her time period?

A: It was always Caroline -- the satellite star, not the planet -- in whom I was most interested. I was interested in the life that was more difficult to discover, more hidden, the life whose sorrows and compromises were not readily apparent, a life whose silences were as eloquent as her words.

She served as William’s housekeeper, secretary, scribe, and scientific partner; eventually she became an important astronomer in own right, discovering several comets and helping to produce many important papers and catalogs that advanced an understanding of the universe.

When William died in 1822 at the age of 83, Caroline wrote to a friend: I could not have imagined the strange blank of life after having lived so long within the radiance of genius.

I wanted to understand both the life lived within the “radiance of genius” and the terrible “blank of life,” after the sun was extinguished.

Q: What kind of research did you need to do to write the novel, and was there anything that especially surprised you?

A: I spent about 15 years – off and on – working on the novel, reading about astronomy and about the period in general, reading Caroline and William’s papers and journals.

I traveled to England and saw the house in Bath where they lived for many years, and which is now maintained as a museum.

I spent many nights at the observatory at the University of Virginia -- making a nuisance of myself with the graduate students there -- trying to understand what I was looking at, what Caroline and William had been looking at. 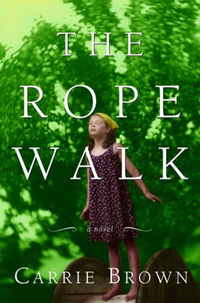 I wanted to capture that feeling, which I think was especially pronounced for Caroline and for William, though in different ways, William because he understood so much, and Caroline because – at first – she understood so little.

A: A novel – right now I’m trying to make it work as a collection of interconnected stories -- featuring characters in a wealthy Connecticut suburb.

The protagonist is a young illegal immigrant, Hector, who has grown up in the less affluent town of Port Hannah nearby, and who works as a waiter in Troy at the private Meadows Club.

The stories involve a range of characters with whom Hector has relationships: a fantastically wealthy widow who is losing her memory; an older waiter at the club, who is a father figure to Hector; the club's devious manager; Hector's Muslim girlfriend, whose parents do not know about their daughter's relationship; a kindly couple whose efforts to help Hector are as filled with missteps as they are with kindness.

The collection overall explores the controversies and dilemmas surrounding the issue of immigration. Hector is – to me -- a heroic figure, a young man alone and vulnerable but trying be a moral creature in a world that is as corrupt as it is beautiful, as exclusive as it is desirable.

A: My husband’s new novel, A Thousand Miles from Nowhere, will be out this June. Can I give it a plug here?! It’s wonderful -- funny and sad at once, beautifully written and very moving – about a man fleeing from New Orleans in the wake of Hurricane Katrina, and about how we resurrect a life from its ruins. I hope readers will look for it.