Sara Pascoe is the author of the new children's book Oswald, the Almost Famous Opossum. She also has written Ratchet the Reluctant Witch. Also a clinical psychologist, she is originally from the United States and now lives in Bournemouth, England.

Q: How did you come up with the idea for Oswald the opossum?

A: I was living in Mount Rainier, Maryland, in the house the story is set in, when I became a huge fan of the Washington Post weekly column called "Animal Watch." This is a roundup of the most interesting cases from the local Humane Society.

Of course, many of the cases are sad, but other times the animals’ antics are hilarious—an owl perched on a toothbrush holder, a ferret on a bus (did it pay?). I started to imagine that the animals were doing these things on purpose.

During this same time, I had my regular opossum and raccoon visitors who were very helpful with baked on lasagna pans and other perfectly good leftovers I couldn’t face again.

Together these experiences melded into a story. I would ride the Metro to work with the tale running in my head. Laughing aloud to yourself is a good way to get a seat (with an empty one next to you).

Although I tapped out a draft of the first chapter and a book outline, life got in the way. I continued to work fulltime in public policy, then moved to England to follow my then boyfriend (don’t worry, he knew). We first lived outside London where I worked as a psychologist.

But I missed Oswald, as I’d taken to calling the opossum protagonist. And I also missed my friends, who were finding their way into the book in various incarnations. 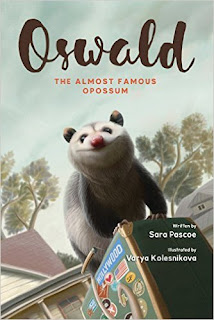 So spending time on it was restorative as I bumped around my new homeland, using the wrong words for common objects (they call shopping carts “trolleys”—that took some pantomiming to sort out) and not apologizing enough to fit into the British culture very well. (Did you know that the peace sign, two fingers extended, in the U.K. means the same as the middle finger in the U.S.?)

Q: As you mentioned, the story takes place in a neighborhood in Mount Rainier, Maryland. How important is setting to you in your writing, and could this story have taken place somewhere else?

A: The setting is always important to me. I tend to see the story unfold in my imagination, like a movie and I can get rather perfectionistic (OK, obsessive) in using real places. I spend considerable time on the virtual streets of Google maps when I’m writing.

My brilliant editor Lindsey Alexander pulls me back when I argue that I can’t possibly change some aspect of reality to fit the story. “It is a story, Sara!”

And in addition to missing my friends, I missed my old neighborhood, Mount Rainier. It is a one-square mile, 100-year-old town on the northeast border of Washington, D.C. There are a lot of beautiful old homes, some or many of which are likely Sears Houses (shipped in parts on trains).

It was also a great mix of people for me, working people and artsy folks. One year, a mayoral candidate ran on the platform of turning all of Mount Rainier into a cat refuge. There is a street lined with stores including the long-standing health food coop, Glut. Mount Rainier is another character in the story.

A: Both, really. I’m a meticulous outliner when I plotting out my novels. I do this, in part, because I have a naturally meandering narrative style. Or as a dear friend calls it, “we interrupt ourselves.” 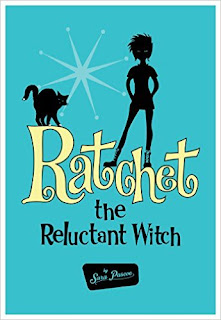 I took some courses in screenwriting—something I also love. But as hard as it might be to sell books, screenplays are another thing entirely. After all, you’re asking someone to invest millions to bring your story to the screen, rather than a few bucks to buy a book.

I found the screenwriting courses invaluable for teaching me about plotting. I highly recommend it for any new novel writers.

Q: What would you say is the ideal age for a reader of this book?

A: Seven to nine-year-old and up, I’d say. I think this may be one of those kids’ books at least some adults enjoy as well. Your animal lover sort of people, for sure.

A: I am currently working on my next middle-grade novel, Space Boy. This is currently written as a feature-length screenplay.

It’s about a boy who clones himself so he can run away and escape the bullying at school (“Hey Space Boy, you’re as big as your own planet”) and the misery at home where his younger twin siblings are the apparent favorites.

But when the clone has teething problems, he is forced to stay, then face how good his life could be. If only he could have it back.

I am also working on novels for adults under a pseudonym. Lucifer’s Librarian is about a woman who accidentally follows her no-good and ill-fated boyfriend into Hell. There are others. See? More meandering…

A: Finding the illustrator, Varya Kolesnikova, who lives in St. Petersburg, Russia, was tremendous luck, including that she was available to do the work. I think she’s brilliant.

And we really hit it off, became friends. We got to spend time together, along with her partner, Anton Nesterov, the book cover designer, when we were visiting other friends in St. Petersburg earlier this year. I hope good things come to her from Oswald, and that we can work together again. I am grateful for the internet.

One last thing. I am a much nicer person to be around when I have time for writing. Ask my husband. Ask my cat.