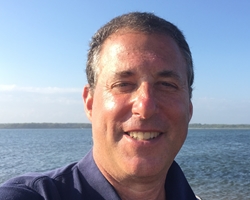 Joshua Hammer is the author of the new book The Bad-Ass Librarians of Timbuktu and Their Race to Save the World's Most Precious Manuscripts. It looks at the recent efforts to rescue historic manuscripts in Mali from Al Qaeda. His other books include Yokohama Burning and A Season in Bethlehem. He was a bureau chief for Newsweek and is a contributing editor for Smithsonian and Outside. He is based in Berlin, Germany.

Q: How did you come up with the idea for your new book, and how did you meet Abdel Kader Haidara, whose story the book tells?

A: I met him first in 2006 on a magazine assignment for Smithsonian. It was one of the first assignments I did for them. I knew Mali a little bit—I had been there 10 years before for Newsweek, and I relished the opportunity to go back. I pitched the idea to Smithsonian.

Because of my interest, and [subsequent] repeated visits to Mali, when the jihadists invaded Mali in 2012 I felt a personal connection. I had been to Timbuktu a few times and had quite a relationship with the people. I wondered what would happen to the manuscripts.

When the dust cleared and the French invaded, I went to Mali again, and picked up the story again…It led to the idea of doing a book about this… 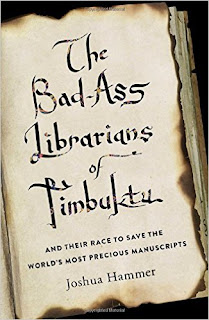 Q: What role did Timbuktu play in the region’s culture and scholarship, and how did it become the repository of these important works?

A: The first Europeans [who visited Timbuktu] in the 1820s and ‘30s were disappointed. It had lost its luster. It was a poor, decrepit, isolated outpost in the desert.

You have to go back [another] 300-400 years to understand the aura of Timbuktu in the 15th and 16th centuries. It’s at the intersection of the Niger River and the desert trading routes. By dint of that, it was a natural international crossroads for the world.

In those days, it had great commercial importance. Because of a couple of enlightened leaders, it developed cultural importance. They were devout Muslims but people open to secular learning, people who took this seriously and were willing to attract artists and writers.

It developed an intellectual atmosphere in the beginning of the 16th century. For 100 years in North Africa, no place was more important culturally than Timbuktu.

Out of that, one of the great manifestations was libraries and universities that flourished for 100 years. They became repositories of manuscripts from all over the Middle East. Manuscripts were produced there and disseminated.

Q: You write that “the original power of the culture itself, and the people…who had become entranced by that power, had saved the great manuscripts in the end.” Why were the manuscripts targeted, and how did Abdel Kader Haidara manage to save them? 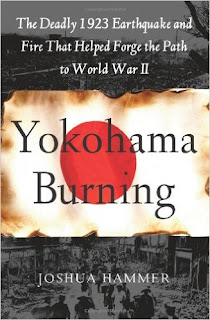 A: There was a fear of their being targeted—the top jihadists seemed to know about them, threaten them from time to time. It was not clear that they were out to destroy them [but] there was fear.

Abdel Kader was not willing to take any chances, nor were the donors [involved in saving the manuscripts.]…It was a joint effort between the money people and the people on the ground, working as quietly as they could.

Only at the very end, when the jihadists were fleeing, you saw the maliciousness came to the surface. They grabbed manuscripts and burned them. It was a vindication of what Abdel Kader had been up to.

Q: So when you look at this effort to save the manuscripts, how likely was it that it would succeed?

A: It’s hard to know. Certainly the jihadists had the opportunity to realize what was going on…possibly because they were too focused on other things, [it] never resulted in organized efforts to arrest people and go house to house.

The care and caution and methodical focus of the rescuers, combined with the inattentiveness of the jihadists, allowed the project to unfold successfully.

The smugglers say their real fear was not the jihadists but…the Malian soldiers in the zone of safety. They would open trunks, threaten them, demand bribes. 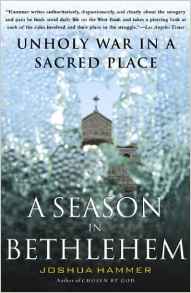 Q:  Where are the manuscripts now, and what is likely to happen to them?

A: They’re scattered around. They’ve been consolidated into a dozen storage facilities that are supposedly climate-controlled and have accouterments like dehumidifiers. Bamako is a very humid place.

They’re sitting in limbo. Abdel Kader would like to move them to Timbuktu, but…Al Qaeda in the Islamic Maghreb has regrouped and is still capable of terror attacks.

Q: So the manuscripts are in Bamako now.

A: Yes. For a short time, there was a fear of a jihadist takeover in 2013, when the French arrived. It’s a relatively stable environment now—[the manuscripts] could remain there indefinitely.

A: No--I would like to get started on it. I’m back in magazine-writing mode and enjoying that. I [recently] won a National Magazine Award…I enjoy writing long narrative pieces. In the next several months, I’ll be looking around [for a book topic].

A: This is an international effort. One of Abdel Kader’s closest associates is an American woman. Americans were connected to the story from the beginning. When the jihadists were coalescing in the desert, Americans were looking at it carefully, trying to train the Malian army, to no avail…They had American involvement running all through [these events].