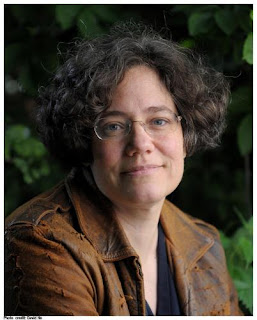 Elizabeth Wein is the author of the young adult novel Black Dove, White Raven, a winner of the 2016 Children's Africana Book Awards. Her many other novels include A Coalition of Lions and The Sunbird. She lives in Scotland.

Q: You write, "I see myself as slipping plausible characters and situations into a historical setting without changing the actual facts--a bit like a discreet time traveler." As you wrote this particular book, what did you see as the right blend of the historical and the fictional?

I loved developing the unlikely family. I based Rhoda and Delia, the grown-ups, on my mother and her best friend in Jamaica, where we lived for three years when I was in elementary school. My mother Carol and her friend Rona raised their babies together for a couple of years, sharing clothes and chores, and often plunking their children into the same baby buggy or playpen.

I loved figuring out a plausible back-story for these two women that would allow them to work and dream together on their own terms. There’s no reason it shouldn’t have happened that way.


For Tazma Meda to work as the Menottis’ home, I had to make up a village and populate it with a very progressive foreign farmer – unlike most British expats the Sinclairs don’t own the land their coffee farm sits on, but rent it from a local landowner. That landowner, Ezra, himself Ethiopian, is a doctor trained in a European institution. No such people with those credentials existed at the time of the book’s setting, but they could have.

I gave my village a wealth of modern conveniences: I built them a clinic and a school and a radio mast and an airstrip. Such things existed, but rarely all in one place.

And it’s not just aspects of modern life that are idealized in Tazma Meda. Its medieval monastery is also a place of marvels, with its priest who rescued church treasures in the battle of Magdala in 1868. Tazma Meda is too good to be true.

The thing is, when I set up a place – or in Delia and Rhoda’s case, a relationship – that’s too good to be true, it’s with the purpose of tearing it down.

For Tazma Meda, I took all the best aspects of the emperor Haile Selassie’s new progressive ideals in the 1930s and threw them together, and then let the war that followed tear them apart, just as it did in real life wherever progressive change had been introduced.

The benevolent farmers leave fearfully, the village is bombed, the doctor is killed, the pilot is blinded… In a metaphoric sense, this is something that Ethiopia keeps suffering again and again. When I was visiting Ethiopia with my aunt in 2004 I was struck by her saying, “If only they could just make it through ONE GENERATION without a war or a drought.”

So, the central focus of the book, the unlikely mixed-race family and their modern village, is fiction. But it is based on the ideals and policies of early 20th century Ethiopia. The war that swallows the family and their village is real in almost every detail, right down to the dates of the battles.

Q: How did you come up with the idea for your characters Em and Teo?

A: The idea for their background – one white, one black, raised together as siblings – came from a kind of “What if?” question in my head – What if my little sister and my mother’s best friend’s Jamaican son really had grown up together, instead of just spending the first two years of their lives together? What if they’d grown up side by side, treated as equals, sharing everything?


Em and Teo are pretty much themselves in terms of personality, developed for the book and by the book as I was writing it, but their close and loving relationship is based very consciously on me and my own younger brother, Jared.

My grandmother, one of my biggest fans, was unable to read this book herself due to poor eyesight and a head injury at the age of 98. The advance reader’s copy of the book arrived and my aunt started to read it aloud to her. My grandmother’s comment was that it reminded her of Elizabeth and Jared! So obviously that relationship does shine through.

One thing I really like to do with my characters is give them a skill or an interest, something they are good at, or something they can get good at by developing their interest, which will help them in later life.

I had Em be good at negotiating and at writing – I’m not sure what she’ll do with that, but perhaps she’ll be a journalist or a lawyer (though she is very theatrical, too)! And Teo clearly needs to do something with his design and engineering skills. These personality aspects develop as part of the plot – the story itself helps to guide me in deciding what the characters will be like. 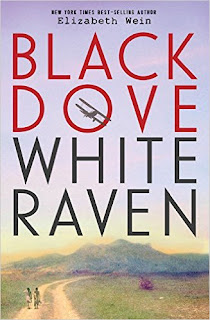 Q: How did you research the novel, and was there anything that particularly surprised you in the course of your research?

A: I am an old-fashioned book-researcher, so that’s where I started and that’s where I got most of the information about the Second Italo-Ethiopian War in 1935.

Information about the war is dense, difficult to find, or not in English (or all three), so that was quite frustrating. I can’t read sources in Amharic, the main spoken and written language of Ethiopia, so that limited me.

I supplemented my reading with the Internet, which is obviously a valuable and incredibly easy source for all kinds of details – and it leads you to places like the Ethiopian Red Cross, which has its own history page on its website (and was founded as a result of the Italian conflict), and to film clips of Haile Selassie in the 1930s, and to real live humans who can answer your questions.

I visited Ethiopia in 2004, and most of the locations in Black Dove, White Raven – the capital Addis Ababa, the ancient city of Aksum, the monastery at Debra Damo – are places I’ve been to (in the case of Debra Damo, I didn’t actually go inside the monastery because women have never been allowed in).

The chapel cut in the rock at Tazma Meda and the hermitage there are based on Lalibela and smaller rock-cut churches which I’ve also visited.

I spent a lot of time poring over UK Ministry of Defense aerial maps of Ethiopia, and with Google Earth, pinpointing exact locations for the flights that take place in the book. If you check out the coordinates of “Delia’s Dream” you’ll find a tiny plateau that matches the description.

I think that the most surprising – indeed, shocking – thing I discovered in my research was the Italians’ relentless use of mustard gas against the Ethiopians.

It was banned according to the Geneva Convention, but they used it anyway, pretty indiscriminately. Very few people that I talk to actually know this. The British fear that gas would be used on civilian populations during World War II makes so much more sense to me now.

I was also pretty stunned – and delighted! – to discover that one of the young Ethiopian pilots training with the emperor Haile Selassie’s fledgling air force in the 1930s was a woman! Her name was Mulumebet Emeru. (This photograph is plausible.)

Q: What role did your own experiences as a pilot play in the creation of this novel?

A: The flight sequences (but not the chases!) are partly based on a trip that I made with my husband across Kenya before we were married, when our most important item of equipment was water in case we had to do an emergency landing in the middle of the wilderness.

But actually, Em’s learning to fly is based on my own learning to fly – that feeling of “I am so scared of landing I want to die” – and spending all your time dreading your next lesson! It is the hardest thing I have ever done.

All the pilots in my other books are so confident and natural; I thought it was about time I wrote about the difficulty of learning to fly.

I also once had a flight in an open cockpit aircraft, a Tiger Moth bi-plane, so I drew on that for some of the detail of what it’s like to fly in an early 20th century plane.

But then when I was nearly finished writing the book I discovered that there is a British company that offers wing-walking flight experiences – so I arranged to try wing-walking! I got strapped into a harness on top of the plane (a Stearman bi-plane) and the pilot took off and roared through some dives and steep turns.

It was absolutely glorious. And it certainly gave me much more of an appreciation of what it would be like to have to stand on the body of the aircraft in flight, as well as a small lesson in how the plane handles differently when there’s a person standing on it.

That is probably the craziest thing I’ve ever done in the name of research. 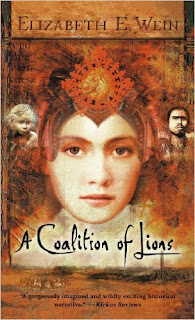 A: My aunt and uncle, Susan and Roger Whitaker, lived in Ethiopia for two years in 1968 – 1970, teaching English with the Peace Corps. I probably wouldn’t have any connection with Ethiopia if it hadn’t been for them.

It was Rog who suggested to me that the ancient Ethiopian kingdom of Aksum would make a good African connection to mention in my first book, which was set in Britain in the 6th century AD and based on legends of King Arthur.

I went on to use Aksum as the setting for four more books. They’re all available as e-books now from Open Road. A Coalition of Lions and The Sunbird are the ones with the strongest Ethiopian focus and the easiest to pick up on their own.

Susan and Rog took me to Ethiopia with them in 2004 when they went back for the first time in 35 years. We had a wonderful journey, visiting schools and churches and many of the historic sites where I’ve set my books; we went to visit the house where they’d lived and discovered that their old landlord was still living there. 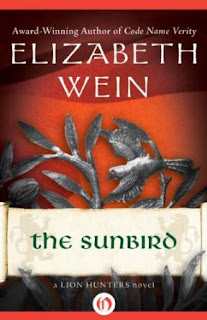 I wrote a blog post about that trip which can be viewed here.

And the other thing you should know about me is that my maternal grandmother, whom I mentioned earlier, raised me from the time my mother died when I was 14.

Betty Flocken passed away herself last year at the age of 98, and by the strangest kind of fortune – after a brief visit with her I’d postponed a flight back to Scotland due to a winter storm – I was at her side when she died.

She was and remains the single most wonderful figure in my life and in the lives of many others, and she made me what I am today. If I have “the writing bug,” as she called it, I got it from her, along with my name – Elizabeth.

Thanks so much for the interview, Deborah, and for allowing me to share some of the background for Black Dove, White Raven!