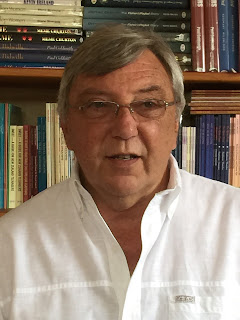 David Ling is the author of the new children's picture book Why Do Cats Have Tails? After working in the publishing industry for almost two decades, he established David Ling Publishing in 1992 and its children's imprint, Duck Creek Press, in 2010. He is based in Auckland, New Zealand.

Q: How did you come up with the idea for Why Do Cats Have Tails?, and why did you decide to have it focus on a grandfather and grandchildren?

A: Young children are very curious about the world around them and ask lots and lots of questions. Some make you laugh, some are so pretty weird and hard to answer.

Like many other grandfathers, I suspect, I found myself giving silly answers to amuse my granddaughter Emma and it has turned into a sort of game where we have lots of fun coming up with answers to questions that get sillier and sillier.

Suddenly a book idea was born but it took me several months playing around with it on and off before I felt it was right and ready to pass over to the illustrator.

Q: Did you plot out the entire story before you wrote it, or did you make changes along the way?

A:  I didn’t plan the whole thing out at once. I started with the title and a couple of silly answers and ideas for how they could be illustrated and then it gradually grew as more silly answers came to mind. A second, younger granddaughter, Lara, was added after a while to allow for more illustration possibilities.

Q: You're also a publisher of children's books--why did you launch Duck Creek Press in 2010?

A: I had published children’s picture books before, including another one of my own, when I was a local director of multinational companies here in New Zealand.

When I went independent with David Ling Publishing in 1992 I concentrated on building an adult fiction and non-fiction list but always wanted to also publish picture books again.

Finally in 2009 I had a couple of irresistible manuscripts in hand and saw a bit of a gap in the market so decided to take the leap, creating Duck Creek Press as a specialist imprint within the company. There are now more than 30 Duck Creek titles in print alongside the larger David Ling list. It’s been a lot of fun. 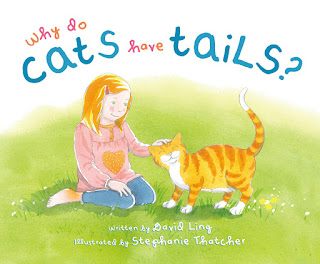 Q: Who are some New Zealand-based writers whose work you particularly recommend?

A: There are so many to recommend it’s hard to know where to begin, and certainly where to end. A very authoritative guide as to what is really good recent children’s writing and publishing in New Zealand is to look at the annual Storylines Notable Book Awards. Here is a link to the latest list.

A: At the moment I’m very busy with other authors’ work but I have an idea lurking that I will toy with when I get a chance. It’s quite different from Why Do Cats Have Tails? And time will tell whether it’s a dead end or not.

A: With a national population of around four and a half million and a completely open market to anything published anywhere in the English language, getting good volume sales in local publishing is pretty tough. Selling overseas rights to many of our titles has made a big difference financially, to the company and to the authors and illustrators.