Umar Turaki is the author of the new novel Such a Beautiful Thing to Behold. Also a filmmaker, he is from Jos, Nigeria, and lives in Kelowna, British Columbia.

Q: Your novel focuses on a plague affecting a village. What relationship do you see your story having to the ongoing Covid pandemic?

A: On the face of it, it really is pure coincidence. I never set out to write anything topical or that would "tap into the zeitgeist."

Having said that, it would certainly be remiss of me to refuse to engage with it in any meaningful way. At the heart of my novel's premise is the belief that catastrophic situations bring out the worst in us, but more importantly, they can bring out the best in us - which is the essence of the book's spirit.

The Covid pandemic has really shown the bottomlessness of human greed, corruption, injustice, etc. - you can add whatever sin you wish to the list and it'll fit. But it has also revealed heroes among everyday humans, people who risked their lives or gave them up altogether for the good of others.

The New Testament tells us that the greatest sacrifice a person can make is to give up their life for another, and people have done that and continue to do that. It's been a terrifying, harrowing, and for many, devastating three years.

I think many are coming out of it wiser and with a deeper sense of gratitude and appreciation for life and other human beings - at least I hope so. And the same can be said for the characters in my novel.

A: The book is a meditation on seeing, on how you look at the world and the power you have in what you choose to acknowledge in your life.

This wasn't obvious to me right off the bat because the novel first existed as a short story and developed and expanded over several years. Somewhere around the time I decided to make it a longer work, this idea of perception that undergirds the story became more apparent to me, as well as all the potent meanings that come with it.

And just like that, the title dropped into my head. I simply went from not having it one moment to having it the next. I second-guessed and questioned it multiple times along the way, but ultimately decided on keeping it. 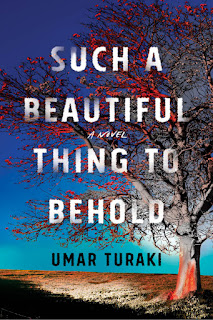 A: For the first few drafts, I never really had an ending, even when I thought I did a couple of times. When I was writing it in its final form, the story's purview originally went far beyond the scene where it now ends.

I was literally inside the scene, in the middle of writing it, when it occurred to me that I had reached the end. I realized that everything that needed to happen for each of the main characters had already happened and that nothing in the story would be as beautiful and meaningful as what was happening at that moment.

So in a way, the story told me that was where it needed to end, and I listened. That's one of my favourite aspects of writing fiction, when the story speaks up and surprises you. There's something almost numinous about the feeling I get when that happens.

Q: The writer Colleen van Niekerk said of the book, "There is an aching beauty woven into the lyrical prose of this novel that lingers with the reader beyond the last page." What do you think of that description, and how would you describe your writing style?

A: That's such a generous, humbling description of the work, coming from a writer as talented as Colleen van Niekerk. But I'll take it, ha ha! I don't like being the judge of such things, but it captures a lot of what I was hoping the reader would walk away with.

In terms of my writing, I think that, for better or worse, I will continue to be less painstaking about language than I would really love to be - and not for want of trying. And I don't know whether to be depressed or to sit contented with that awareness, that I will never hit the mark I set for myself. I hope this doesn't become a self-fulfilling prophecy!

A: My work-in-progress is the oldest meaningful idea I've had as a writer. I tried to do it a couple of times but it just didn't work.

Oddly enough, the first iteration of Such a Beautiful Thing to Behold shares a kinship with this idea in that, for a long time, I thought of them as emerging from the same story universe because I was trying to connect with my roots through my fiction. I know now that they're very different because each idea has kind of branched off in the direction that it was meant to follow.

And I realize this may be just a tease because I haven't really said what the story is about. But I don't like talking about WIPs, so I will only say that it's a novel, it features the desert in a big way, and it may or may not be speculative too.

A: The novel features Ngas, a Nigerian language from Plateau State, which is my mother's native language. On one level, it's a love letter to her, a small way of acknowledging all the wonderful parts of herself that she gave me. Many of the female characters are inspired by her in different ways.