Sarah McCoy is the author of the new novel Mustique Island. Her other books include Marilla of Green Gables, and her work has appeared in a variety of publications, including Real Simple and The Millons. She lives in North Carolina.

Q: You've noted that your novel was “loosely inspired” by the story of a woman named Billy Ray Mitchell. What intrigued you about her life?

A: In all my books, I’m drawn to women who don’t fit traditional social molds. Billy Ray was a woman who, on paper, appeared to be the ideal. An American beauty queen, wife to a British brewery baron, mother of glamorous daughters, rich and living in circles of the world’s elite class… quite nearly a fairy tale.

And yet, there were all these shadowy parts. For every laurel in her story, there was a catch. She was a beauty queen, but her title was bestowed by an incredibly small town in Texas. She was married to a British brewery baron for decades, but then divorced him, lawyered up, won a large civil settlement from his family, and subsequently fled England.

What happened? Why did she leave the noble circle she was already established within? Where were her Texan kin—her daughters? So many questions with nothing on record. Answering those in fiction became my plumbline for this novel’s narrative action.

A: Yes, I did a lot of research. I’m a devoted history geek—the type who plans her vacations around historical sites and then reads, watches, and internet searches every bit of trivia about it before arriving.

That’s how I get revved-up about vacations. The accumulation of knowledge about the place and anticipation of standing in it. I know, my poor husband. Taking a cruise or a week at a Club Med beach resort makes me feel tired and suffocated. I need to feel the history under my feet.

All this to say, I came to Mustique knowing nothing about the island but wanting to learn everything. So, in turn, everything surprised me. Mustique prided itself on surprises.  I stuffed a gracious plenty into the novel but still had to cull out quite a few historical scenes… because they read too unbelievable even for fiction. 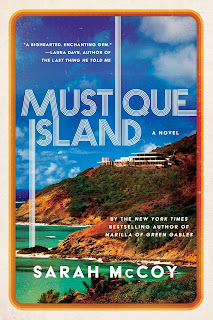 Colin Tennant was larger than life. I have a copy of his autobiography, Lord of the Isle: The Extravagant Life and Times of Colin Tennant, in which he goes into great detail of his… well, his extravagant life and times.

Here’s an example that got pulled from the final book: Colin brought over a Hindu Temple from India made with the same stone as the Taj Mahal. He reconstructed it stone by stone on Mustique and considered it one of his favorite possessions, convinced that he was divinely appointed and in commune with the gods.

Also of note, he was not a religious man but believed in spirituality; a nonconformist who championed peerage; a rule breaker who made up his own rules and expected everyone to follow them. He was a walking paradox in every way.

Q: The writer Therese Anne Fowler said of the book, “Readers will embrace Sarah McCoy's heartfelt, thoughtful story of mothers and daughters, desire and identity amid the circus life of Mustique Island that asks the questions: what do we owe one another, and what do we owe ourselves?” What do you think of that description?

A: First off, I adore Therese. She’s a dear friend and neighbor. I live in Winston-Salem, North Carolina, and she lives in Raleigh. That’s a straight shot across the highway so we call each other neighbors. I love her work and her description of Mustique Island. She nailed one of the heart questions this novel asks readers to examine within themselves and discuss with others.

Q: How would you describe the relationships between your character Willy May and her daughters?

A: Deeply loving but deeply complicated—like every mother-daughter relationship on earth.

I think that’s part of the beauty of Mustique Island. No matter how luxurious or royal or outlandish the outside world, our inner worlds are much the same. Being alive means we will grapple with many of the same fears, insecurities, yearnings, hopes, bittersweet joys, etc. Because at our core is a longing to be fully known, fully loved, and fully accepted.

So much of human existence is a journey to grow something new while remaining rooted to the old. That, too, is a paradoxical state. That’s what makes humanity so uniquely multifaceted and beautiful.

A: I’m always scratching down book ideas in a moleskin journal. This past Christmas, my friend and sister of spirit author Paula McLain sent me a leather journal cover embossed with “McSoul” on the front. That’s our pet name for each other.

The gift feels like a fresh blessing draped over old ground. I took it as a sign that one of my germinating ideas is ready to sprout. But it’s still too early to show and tell. So I hope it’s okay if I just say that I’m working, which in this post-pandemic new normal feels like a triumph all its own.

I hope readers come for the island escapade and leave with a heart treasure of what it means to be worthy of love and family and all the riches that can’t be bought.