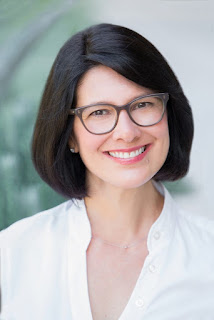 Jacquetta Nammar Feldman is the author of the new middle grade novel Wishing Upon the Same Stars. She lives in Austin, Texas.

Q: In the book's Author’s Note, you describe your own family background and how it influenced the creation of this novel. How did you create your character Yasmeen?

A: My inspiration for my character Yasmeen in Wishing Upon the Same Stars came from a poem I had written. It was a poem about me as an adult tucking away my feelings into desktop poems on my computer, while a middle school version of me found a way to dance her feelings into the light.

The poem kept going and became the story of an Arab American girl who is a little like me—she has a Palestinian father, she moves to Texas from the Midwest, and she dances in her Maronite church’s dance troupe—though many aspects of our families and lives are very different.

While Yasmeen makes a Jewish best friend at age 12 when she meets Ayelet, I didn’t make a Jewish best friend until l turned 18 when I met the boy who would later become my husband. But I could easily imagine what it might have felt like for Yasmeen to meet and make such a friend during middle school.

Q: The author Veera Hiranandani called the book, “A hopeful and big-hearted story about second chances, the undeniable weight of history, and the rocky road we travel when we aspire to connect as humans first, beyond religion or beyond anything that separates us.” What do you think of this description, and what do you hope readers take away from the story?

A: Veera’s review of my book is so touching, warm, and generous. I felt like she recognized the heart of my story and what I hoped to accomplish.

I wrote Wishing Upon the Same Stars because I wanted to give readers a glimpse of what a friendship like Yasmeen and Ayelet’s could do. That even people who share hard histories filled with mistrust, violence, and suffering might one day find paths to better understanding and friendship. Small steps can add up. 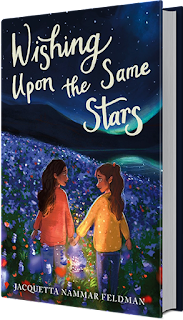 A: I knew from my poem that Yasmeen would be proud of her culture and heritage at the end of the story. I also knew that Yasmeen and Ayelet, along with Waverly and Esme, would all find understanding and friendship in various ways. In fact, I wrote my early chapters, the midpoint chapter, and my end chapter well before filling in the rest of the story.

Originally, however, the story took place in an abridged timeframe, January to June. But my editors felt that the friendships were too rushed and could be more deeply developed during the whole school year. I agreed and revised to this goal, which was no small task. But I’m so glad I did because it made the story much better!

Q: The book is set in San Antonio, Texas. How important is setting to you in your writing?

A: Setting is extremely important to me since my writing is heavily influenced by natural landscapes. I spend part of every single day outside, where I often do my best story generating. Sometimes, I’ll even dictate a whole scene into my phone while I’m on a hike.

San Antonio, where I spent a big part of my childhood, has a natural landscape that reminds me of Jerusalem, where my father grew up. It seemed like the perfect place for Yasmeen and Ayelet’s story to unfold!

A: I’m excited to be in copyedits for another middle grade novel that will be released by HarperCollins on 1/17/2023, The Puttermans Are in the House. It’s a story told through the points of view of two fraternal twins and their first cousin during Houston’s Hurricane Harvey and the World Series.

The heart of the story is about changing and growing relationships and relearning how to cheer for one another when you’ve forgotten how.

A: I’m an MFA student at the Vermont College of Fine Arts in the Writing for Children & Young Adults program, and I just submitted my critical thesis on nonfiction picture book refrains (reach out if you are a fan, I’d love to chat!). During my time at VCFA, I’ve fallen in love with the picture book format, so I hope to find homes for some of my favorite manuscripts soon!