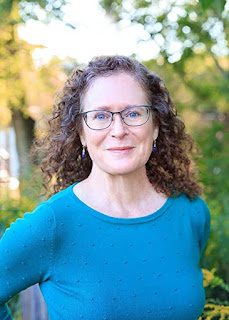 Kate Hannigan is the author of the new children's picture book Blips on a Screen: How Ralph Baer Invented TV Video Gaming and Launched a Worldwide Obsession. Her other books include Nellie vs. Elizabeth. She has worked for the Dallas Morning News and the San Francisco Chronicle, and she lives in Chicago.

Q: How did you learn about Ralph Baer, and at what point did you decide to write this book about him?

A: I was looking at my son one afternoon and enjoying how much fun he was having as he gamed with friends. And it got me wondering about the origins of TV video gaming. This is a huge industry and has captured the hearts and minds of a new generation.

So I started to look into gaming's origins, and there was Ralph Baer! He's known as "the father of video gaming."

A: As I tell students on school visits, I always start my research with books. And thank goodness, Ralph Baer had written his own story!

From there, I turned to newspapers and magazines—which I love doing since I came from newspaper journalism. And researching someone from relatively recent history, sometimes we're lucky enough to find video records. So I had a great time looking at Ralph Baer playing the earliest video games—ping-pong.

And finally, my favorite part of research: talking with real human beings! Ralph Baer's son Mark was incredibly generous with his time and shared some wonderful details that I wouldn't have known if I hadn't been able to speak with him. 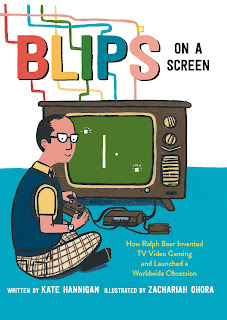 The thing that especially surprised me was Ralph Baer's childhood. He grew up under the rise of the Nazis in Germany.

I talk to students on school visits about how this might feel—to come to school one day and play with all your friends, then return the next day to find school is closed to you because your family is Jewish. Think of all the emotions—anger, fear, desperation.

His family was able to flee, becoming refugees from Germany and making their way to the United States. But other members of his family did not make it out. From such a devastating childhood, Ralph Baer still gave the world so many inventions that brought joy, happiness, and fun.

Q: What do you think Zachariah OHora's illustrations add to the book?

A: I have been a fan of Zachariah OHora for years! So I am beyond excited to see his illustrations telling Ralph Baer's story! There is such a liveliness to his art. He brings the fun.

A: This is a story of an inventor, but it's also a story of invention. I hope that kids get excited about how gaming came to be, and that they think about how they might be the next Ralph Baer and invent something that changes the world!

A: I've always got projects going! I'm working on a few different picture book biographies about interesting people—they are in various stages of completion with my editor. And I'm shopping around a middle-grade mystery that has a fun historical component. History rocks.

A: I'm hoping teachers take an interest in Ralph Baer's story! I'd love to visit classrooms in the fall—either in-person or virtually! There's so much interesting stuff around gaming's origins!