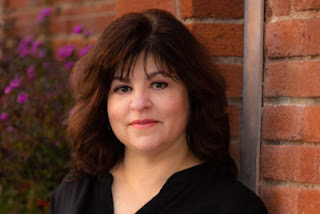 Heather Chavez is the author of the new novel Blood Will Tell. She also has written the novel No Bad Deed. She lives in Santa Rosa, California.

Q: What inspired you to write Blood Will Tell, and how did you create your characters Frankie and Izzy?

A: As a younger sister myself, I always knew I wanted to explore this complicated dynamic, so this book evolved a little differently than my others. Usually, the premise comes to me first, but this time, Frankie and Izzy’s relationship was always going to be the heart of the book.

So, once I had that decided, I went to work figuring out how best to torture them—what event would put them most at odds with one another?

I also spent a lot of time in their heads, thinking about who they were, and how they interacted with one another, especially under stress. What drives them? What misconceptions lead them to make mistakes? What are their blind spots?

Q: The Publishers Weekly review of the book says, “The author paints a moving portrait of sisters stumbling toward an adult relationship, perpetually driving one another crazy, but also loving each other deeply.” What do you think of that assessment, and how would you describe the relationship between the sisters?

A: I loved reading that because it captures the core of their relationship. Frankie loves Izzy, but she doesn’t always trust her. And Izzy has long relied on Frankie, but she also resents her for that interference. It’s often that way with people we love so deeply—the characteristics that draw us in can also frustrate us, especially if we see in them pieces of ourselves. 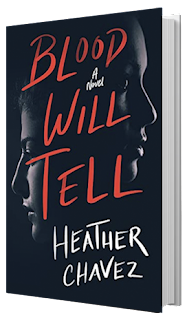 Q: The novel involves two different timelines--did you write it in the order in which it appears?

A: While I most often write the chapters in the order they appear, that wasn’t the case for Blood Will Tell. I knew the backstory as I wrote Frankie’s present-day timeline, of course, but when I got to the end of the book, I realized I’d limited myself by not having flashbacks. The resolution to one of the key mysteries, for instance, wasn’t fully realized.

So, once I was done with a draft of the book, I went back and created the Mercuryville chapters.

A: First, I hope readers are entertained. If I’ve accomplished that and nothing else, I’ve succeeded.

I love if someone finishes my book quickly. But I also hope it makes them feel something—maybe they reflect on their own relationships, or something in it makes them think. I had one reader tell me the relationship between the sisters touched her soul, and that’s the best kind of feedback.

A: I’m currently in edits on another standalone thriller with an entirely different but equally complicated relationship between two strong women at its core. While I can’t say more yet, I’m really excited to one day share these characters and their story with readers.

A: I would love to give a shout-out to all the readers who leave reviews or tell their friends about books they love.

In that spirit, I would like to recommend four books I read and loved: For Your Own Good by Samantha Downing, The Family Plot by Megan Collins, Mother May I by Joshilyn Jackson, and The Last Flight by Julie Clark.

I’ve been finding it a struggle to carve out time for reading, but I finished each of these books in a day.