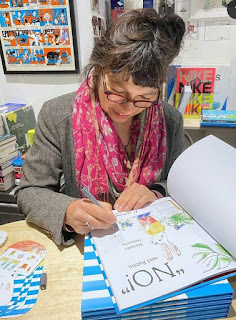 Marjoke Henrichs is the author and illustrator of the children's picture book No! said Rabbit. She is originally from the Netherlands, and she lives in England.

Q: What inspired you to create No! said Rabbit?

A: No! said Rabbit is my debut book. I developed it as part of my graduation project of the MA at Cambridge School of Art. I started with exploring opposites and my main character was a lion who somehow much later morphed into a Rabbit! My own and friends’ children were an inspiration.

Q: How did your background as a theater designer factor into this picture book, and how did you decide to get involved in creating children's picture books?

A: Making picture books is very similar to designing for theatre. With both you are telling stories, using space, composition, colour, “costume,” and less is more. So I probably look and approach it with a theatre designer’s eye, as that’s how I have worked for many years.

The only difference is a picture book gets printed in the same size as I have drawn/painted it and a theatre design, be it a scale model or costume drawing, has to be built life size.

There were several reasons that I decided to go into picture books. One was of course that I love picture books and since my children were little, had always the thought of creating them in the back of my mind. 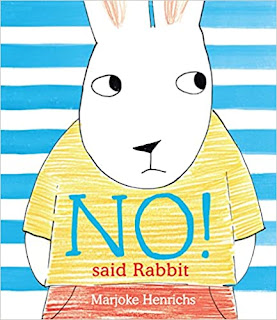 Another reason was that I was looking for work I could do from home for the rest of my life, as theatre work requires so much travel and late nights.

Another one is that I wanted to bring smiles and light to children, creating happy moments, and with books I could reach many more and much further afield, which No! said Rabbit definitely does, as it is now translated into 12 languages.

A: I started with images first, playing around, cutting and pasting. After that I added text. Once I had a basic storyline, I worked on both at the same time.

Q: The Horn Book Magazine review of the book says, “Young readers will take delight in the playful and fiercely independent Rabbit, and the sweet surprise ending will remind parents and other adults that sometimes the answer will be a wholehearted ‘Yes!’” What do you think of that description?

A: It’s a lovely take on it! Although I feel Rabbit is not that independent. He goes through the phase of discovering himself; he just says “No” to be able to experience to decide for himself. Everything he gets offered or is asked to do by Mum is then on his terms. But of course a cuddle offer is just too good, especially when you are tired.

A: I just finished designing a touring show, which is now on the road, and I am working on another book with a different main character.

A: I paint large canvas semi abstract landscapes in mixed media, which is another influence in my artwork; it all influences each other.