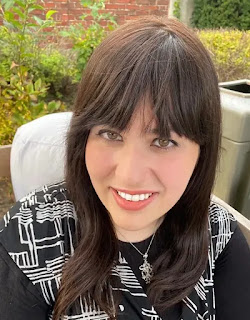 Mari Lowe is the author of the new middle grade novel Aviva vs. the Dybbuk. She is a middle school teacher, and she lives in New York.

Q: What inspired you to write Aviva vs. the Dybbuk, and how did you create your character Aviva?

A: I’d been dissatisfied with many of portrayals of Orthodox Jews in the media, and I had wanted to write a piece in which my community was the backdrop instead of the story. And I’ve always been fascinated by dybbuks and fantastical Jewish mythology, so I wanted to write something with that!

The mikvah was the perfect setting because of its own place in mysticism and how it is such a private, almost secret spot even within the community.

Aviva herself is a bit of amalgam of every middle schooler I grew up with and know today, paired with her own situation. She has been deeply affected by her father’s loss and by years living with a parent with depression, and I tried to create the character with that in mind. Will she want to reach out to the people around her? Will she have the skills for it?

I also tried to find that defensive-protective combination that comes with growing up with a mother who isn’t the norm, where there is a lot of love in the house but not the degree of care that an 11-year-old girl might need.

My strategy is usually to write a couple of chapters with a character until I’ve gotten a feel of who she is, and then to step back and analyze the characteristics I’ve given her for accuracy and consistency. I wanted Aviva to be, at her core, an ordinary girl coping with several tremendous burdens.

Q: The Publishers Weekly review of the book says, in part, “Lowe portrays Aviva and Ema’s mourning with a gentle touch, gradually building to an ending that points toward spiritual and emotional healing, thanks to the steadfast support of their Jewish community, especially its women.” What do you think of that description, and did you know how the novel would end before you started writing it?

A: I love it! It’s very much what I intended with the story, and it’s so gratifying to see that the text is portraying it. In particular, the role of women within the story was something that I considered while I was writing.

Of course, the story primarily takes place above a women’s mikvah, so women were always going to be the story, but something that has always struck me about the Orthodox community is how easily a girl can grow up entirely with women.

We go to all-girls’ schools where male teachers are rare, if present at all, and the major influential figures within our lives are usually women. And women here organize and create our own community where those who are struggling are quietly taken care of in subtle ways, like the women who visit Aviva’s mikvah just to keep it running and leave generous tips. 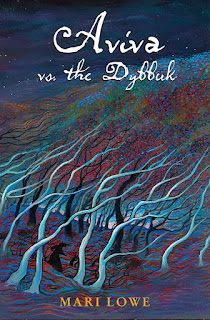 I think I knew how the novel would end fairly early on. Well, not entirely– there were about 20 pages of machanayim that I cut out of the final chapter! But the overall themes and reveals were something that became clear to me as I wrote the early chapters.

I don’t think I was even aware that Aviva had lost her father until the end of the first chapter, though. Before writing, I had envisioned the story as a lighter portrayal of a girl, a dybbuk, and its antics. But as soon as I had written the last paragraph of Chapter One, I knew that this was going to be a more serious story. The rest came together soon after that.

Q: What do you see as the role of the dybbuk in the novel?

A: Dybbuks are an interesting concept. Early stories of dybbuks usually involve a possession and something similar to an exorcism. Most likely, the “dybbuk” was actually schizophrenia or dementia that people in the Middle Ages didn’t understand, and that wasn’t the kind of dybbuk that I thought would be appropriate today.

Instead, I wanted to explore the idea that the dybbuk is a spirit that won’t rest, that exists in the liminal spaces between life and death. Aviva and her mother are both trapped in that same space, lost in a grief that has them standing still, and a dybbuk felt like the perfect manifestation of their situation.

Without spoilers, the dybbuk plays multiple roles within the story, but I think that this is really where the core of its story is– existing as a companion to this family as it remains immobilized, and unnecessary outside of their house of mourning. It’s why it never leaves the mikvah, and why, eventually, the end of its story signifies the start of their healing.

A: I certainly hope that they’ll come out of it with a greater understanding of the Orthodox Jewish community! There are some absurd caricatures out there that are much more widespread than the truth, and I hope to dispel them or at least provide a counterpoint.

Middle grade is a great age to write for because it’s when kids are starting to think in shades of grey, finding nuance in what they read, and early assumptions can be challenged and reconsidered. Aviva lives in a community that might be unusual to some readers, but I do think that many readers will find more commonality with her than they’d expect.

And that goes for more than just the setting! Aviva is someone who has lost a parent, who has a parent struggling with mental health, and who herself has those struggles, too. She’s a character who has lost a friend and is learning how to reclaim her with grace, and she’s a girl who has trouble sitting still in class but is a pro with a ball.

I hope that there is plenty to relate to with her, and I hope that readers enduring similar situations will feel a connection that might provide them with comfort or encouragement.

A: I’ve got another book in the works, this one a middle grade thriller set in a similar community which will tackle concepts like toxic friendships, belonging, and forgiveness. I’m also working on a short story for a Passover-themed anthology, and I’ve been contemplating a third book which will be set in a modern-day ir miklat. But that’s a possible project for this summer!