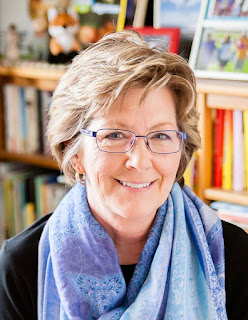 Jill Esbaum is the author of the new children's picture book Jack Knight's Brave Flight: How One Gutsy Pilot Saved the U.S. Air Mail Service. It focuses on an event that took place in 1921. Esbaum's many other books include the Thunder and Cluck series. She lives in Iowa.

Q: What inspired you to write Jack Knight's Brave Flight?

A: I found Jack's story while researching a different topic, and the other book idea flew right out of my head.

Jack's brave flight seemed ideal for the picture book format––an unlikely everyman thrust into a role he hadn't anticipated, a do-or-die moment to shine or go down in flames (perhaps literally), a brief timeline, and a successful outcome that made Jack an overnight sensation.

A: I always start by Googling my subject. Many articles about this event included bibliographies that led me to other, more-obscure sources. I also interviewed the daughter of one of the men involved in the relay.

The biggest surprise I found, which wasn't included in any newspaper article about the event, was that when Jack finally landed in Chicago, after flying through a blizzard in sub-zero temperatures, he couldn't crawl from the plane. His leather flight suit had frozen to the seat.

Q: What do you think Stacy Innerst's illustrations add to the story?

A: I knew this setting would be difficult to picture. Most of it happens in a night sky, after all. 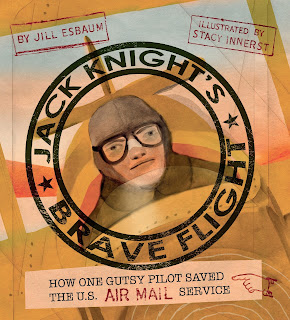 But, wow. There's a reason Stacy has such a stellar reputation. He did a masterful job of making a reader feel like they're right there in the freezing cockpit with Jack, being pelted with sleet and snow, trying to see over the side of the plane to figure out what's below.

I've long been an admirer or Stacy's work and feel extremely fortunate he was part of this project.

Q: The Publishers Weekly review of the book called it "A riveting journey about an undersung aviator." What do you think of that description?

A: That's it exactly. Riveted is how I felt when first reading about Jack's monumental accomplishment. And even though he was headline news for a few days, who among us has ever heard of him (or this event)?

I love stumbling onto a topic that underscores the fleeting nature of fame. That's the kind of thing that gives me goosebumps.

A: I'm past the research stage on another nonfiction picture book, trying to figure out how to tell readers about a briefly "famous" animal. That's all I can say.

A: My next picture book biography features Gene Stratton-Porter, a prolific author from the early 1900s. She was a fascinating woman, as famous in her time as J. K. Rowling was when Harry Potter first exploded onto the scene.

I couldn't resist writing about Gene, especially since an element of her free-range childhood had a direct impact on her adult life. The book is called Bird Girl - Gene Stratton-Porter Shares Her Love of Nature with the World.

Meanwhile, I have a funny informational picture book coming in 2023, illustrated by the phenomenal Bob Shea, called Stinkbird Has a Superpower.