Connie Hertzberg Mayo is the author of the new historical novel The Sharp Edge of Mercy. She also has written the novel The Island of Worthy Boys. She lives in Massachusetts.

Q: What inspired you to write The Sharp Edge of Mercy, and how did you create your character Lillian Dolan?

A: I heard about the New York Cancer Hospital on a design podcast called 99 Percent Invisible, and I was fascinated not only by the cool architecture of the hospital with its round turrets, but also by the idea of a cancer-only hospital that was built because some people thought cancer was contagious! I had been wanting to write a novel about medical ethics and this seemed like the perfect place.

And at the time I started writing it, my daughter was the same age as Lillian, so I felt I had something to say about young adults who tend to see the world in black-or-white but then get thrown into the big bad world and have to learn about all the murky gray. I'm sympathetic to that rude awakening.

A: In addition to using my friend the Internet, I went to look at the archives from the hospital. I thought they would be somewhere in Manhattan, but weirdly they are at the Rockefeller Archive Center which is in Sleepy Hollow, New York - the town where I went to high school. I took this as a sign from the universe that I had to commit to this book!

The most surprising thing I learned was about how they would inject patients with whiskey as a stimulant if a surgery wasn't going well. I would not have believed it if I had not read it in the actual surgical notes at the archive.

Q: The author Barbara Stark-Nemon said of the book, "Mayo deftly weaves Lillian's story of ambition, love, loyalty and friendship set against challenges of race, class, disability, sexual preferences and questions of medical ethics. This is historical fiction that anticipates many of the weightiest issues of today through an engaging read." What do you think of that description, and how do you think the book's themes tie into many of today's concerns?

As was true for my first novel, The Island of Worthy Boys, I like to write about issues that weigh on people in the current day but were also issues 100+ years ago. For my first book, those issues were how social services succeed or fail at helping underprivileged children, as well as immigrant discrimination. 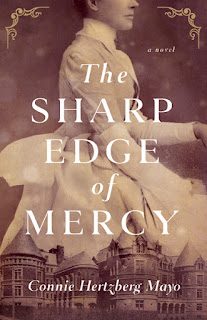 In The Sharp Edge of Mercy, the issues include racial and LGTBQ discrimination, caring for disabled dependents, and of course medical ethics and #MeToo.

In all of these areas, I would say we have made progress in the last 100 years but we are far from solving any of them. So I think that makes these issues interesting to read about in historical fiction - you can relate sitting in your 21st century chair but you can also see that things used to be worse.

A: Good question! For my first book, I knew the ending from the beginning, but for some reason, I did not for The Sharp Edge of Mercy. And I got near to the end and I panicked!

Then I used this method one of my author friend calls "plot babble", which is: You open a Word document and start typing anything that comes into your head. "I don't know what I'm going to do. I can't have this person die! And this character hates that one, so..." and on and on. But eventually if you type enough, you can find your way out of the maze - it worked! (After many pages.)

A: It would be a stretch to say I am "working on" this at the moment, but I have my third novel fully outlined - something I did not do for the first two books. I even have a description of what happens in each individual chapter. (So I do know the ending to this one!)

This is all thanks to a workshop I took at the Grub Street Writing Center in Boston - it was a Zoom during the height of the pandemic and I just wanted to feel like I was doing something constructive.

The story is about three families in a brownstone in Boston's West End, which the city of Boston took by eminent domain and razed in 1958. Each family has one or more members for whom moving from this neighborhood will be catastrophic, all for different reasons. My working title for it is The Wrecking Ball (if I could just get that image of the Miley Cyrus video out of my head).

A: Originally this was supposed to be a book primarily about medical ethics, but very soon after I started writing it, the hashtag #MeToo was first used, and as time wore on that aspect of this book just grew, almost with a mind of its own.

I was at the height of writing the book during the hearings for Supreme Court nominee Brett Kavanaugh, and I just let loose and allowed the book to be equally about medical ethics and #MeToo. Sometimes stories just kinda want to grab the keyboard from you.