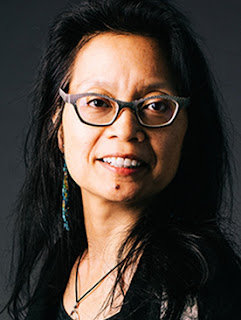 Marie Myung-Ok Lee is the author of the new novel The Evening Hero. Her other books include the young adult novel Finding My Voice, and her work has appeared in a variety of publications, including The New York Times and The Atlantic. She teaches creative writing at Columbia University, and she lives in New York City.

Q: What inspired you to write The Evening Hero, and how did you create your character Dr. Yungman Kwak?

A: This note below is the first seed of what was then called Chaos Theory. It was an homage to the small village gossip and doctor-plot in Middlemarch, and not to get too wonky since it was about father-son (both doctors, but very different approaches to patient care), I used the metaphor of the Mandelbrot set, which has to do with fractals and chaos theory — basically that in nature the branch is the smaller version of the larger one, but not identical, it’s different different — that’s the chaos part of it. 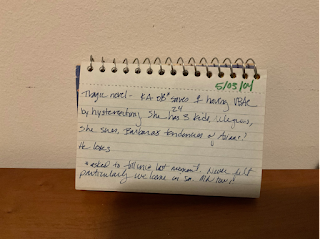 Over the 18 years I was writing it, it began as an idea of what if a doctor did his best to do the right thing, first do no harm, etc., and is still somehow tried in a court of law and RUINED by a medical malpractice case?

It was also inspired by when I was taking my son (who has major medical issues) to a spine specialist and he told me the story about his OB friend whose excellent clinical skills only got him in hot water.

At the same time, when I’d been trying to find OB-GYNs to shadow to start the research, it turned out the sister of a good friend was now a gynecologist because he no longer practiced OB for a similar reason (twins died on her watch, BUT it was because the medical student interns didn’t tell her what was going on. She got fired and also was so traumatized - she felt responsible PLUS was thrown under the bus by the hospital) she stopped practicing.

In Middlemarch there's an odious character named Raffles who is a big grifter so no one's sad when he gets sick--but the doctor being a doctor does his best and treats him and accidentally kills him because he has incomplete information.

I guess the mismatch between intention, outcome, and perception of outcome was my first obsession.

But then as I was writing it, because the father and son are both Korean American, the father is an immigrant--undocumented for a time--all these other factors like racism, the trauma of the Korean war, anti-immigrant sentiment, came into play.

Then with the 2016 election and with the horrific rise in anti-immigrant and anti-Asian sentiment (which really revved up with COVID), what had been the son's story of medical malpractice became more the father's story of immigration. Also, the father just naturally had very funny observations on things and I noticed I was giggling while I was writing his parts. 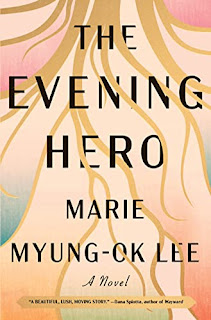 Q: The author Ann Packer said of the book, “The Evening Hero is at once a hilarious, lacerating look at the American for-profit healthcare system and a profoundly moving examination of the long-term effects of war, trauma, and displacement on individuals, families, and cultures.” What do you think of that description?

A: I particularly relish her using the word "hilarious." Like what's so hilarious about war trauma, racism, the awfulness of our healthcare system that literally kills people for money? It's NOT funny.

However, a lot of Korean culture and literary tradition (and zombie movies!) operate on a yin-yang principle of balance. A kind of insistent "war is hell" novel that Tim O'Brien or Larry Heinemann [would write].

Q: How would you describe the relationship between Yungman and his wife, Young-ae?

A: Yungman has always been in love with Young-ae, even when they were children and he stared at her from afar. Because she was of a much higher class standing, it seemed impossible they could get together, but Yungman's fortunes changed drastically during the war (both good and bad) and so they found themselves at the same medical school, more or less at equal footing.

Young-ae for her part, was less interested in romance and more in changing the world.

The book explores the idea of can you be in a long marriage with someone, stay there, without any actual love? And how would that happen?

Q: Much of the book takes place in more or less the present time, but one section is set during the Korean War. How did you decide on the novel's structure, and did you know how it would end before you started writing it?

A: A lot of people like epic, chronological historical novels. For me, because Yungman was an immigrant trying to escape his past, the past would creep up on him and erupt at untoward intervals.

The book is to some degree how you cannot escape your past, no matter how hard you try. And, for people like my parents, who've had to change their homes often involuntarily, there's a fractured sense of self that I wanted to reflect, by fracturing the narrative.

I hope it gestures to Yungman in the present, without it being direct like to like, a flashback that explains everything.

A: This news of Russia going to war in the Ukraine is incredibly upsetting ...

As the village elder tells the protagonist in The Evening Hero:

The Evening Hero is, among other things, about how the Korean War was to some degree the start of America's forever wars -- not like we didn't wage war against the Indians, the Mexicans, etc., but the Korean war started war as big business ("military-industrial complex," as Eisenhower, a military guy, put it) also using things like PSY-ops (on our own troops!) and biological weapons to get people to kill more efficiently and what fun to experiment on some useless Asians who are far away from America.

We now have troops stationed all over the world, and the defense industry--I worked as an investment banker to fund my early career--I can tell you is big business.

I'm reading the novel The Mountains Sing - about the French (and to some degree Japanese) colonization of Vietnam, followed so quickly by the US war, which is totally different in tone (The Evening Hero is also funny, if you can try to imagine it), I find myself weeping not just as the brutality of war but of how SIMILAR the experiences are, of people who just want to live life but then there's brutal colonization and wars and bombs everywhere so that a little girl can't even go to school and her mother has PTSD.

And if anything, I think this book sings the song of the people--people just want to get on with their lives and yet war disrupts everything. I hope art can help break the cycle.

I don't know sometimes if being a writer "does" anything. But that's all I can do is try. Maybe the next generation will think more about the costs of war (including to the environment!), how it takes away resources from PEOPLE...