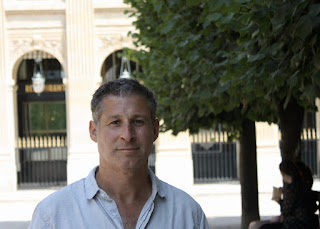 Chris Pavone is the author of the new novel Two Nights in Lisbon. His other books include The Paris Diversion, and his work has appeared in a variety of publications, including The New York Times Book Review and Salon. He lives in New York City.

Q: What inspired you to write Two Nights in Lisbon, and how did you create your character Ariel Pryce?

A: I got the initial idea for Ariel Pryce two decades ago, in my previous life as a book editor at a big New York publishing house. One of my cookbook authors was becoming very famous at the exact moment when we were producing her first book.

The two of us went out for coffee one day, and suddenly people were coming up to tell her that they were fans, that they loved her, that she was beautiful—one stranger after another who felt entitled to interrupt, to inject themselves, to talk to a stranger in Starbucks.

She was grateful for these interactions, generous with her time and herself, and I think her genuine warmth was one of the things that helped make her such a huge star.

To me it looked horrible. I was struck by how fame and beauty—and especially the enviable-seeming pairing of the two—can be immense burdens, making constant demands that you didn’t necessarily sign up for, a whole way of interacting with the world, and allowing the world to interact with you—just walking down the street, getting a coffee, browsing in a bookstore: you’re always about to be ogled, accosted, propositioned.

And that’s not the worst of it. Not by a long shot.

The inspiration for the plot itself was the Access Hollywood tape in 2016, and in particular the indifferent response from a large swath of America, dismissing the so-called locker-room talk as well as the myriad allegations of sexual assault.

All politics aside, I simply could not understand what it was about these violent sex crimes that made it so easy for so many people to discount them, to excuse them, to ignore them. I despaired about what was wrong with our society, why so many people were unwilling to look at this problem, what could be done about it.

Then a couple of years later, during the Kavanaugh hearings, I realized one small thing that I could do, with a novel in which a character does the same: show people something that’s impossible to ignore, to force them to look closely at something else.

Q: The book’s action takes place over six days, with an epilogue set three months later. How did you decide on the novel’s structure, and did you know how it would end before you started writing it? 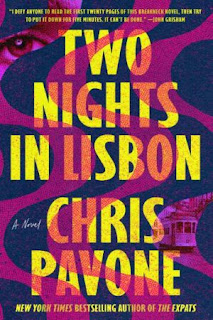 A: The entire premise requires a compressed timeframe; it’s the time-sensitive urgency that makes this plot work.

When I began writing, I thought maybe the meat of the story would take place entirely in a single day, which was one of the things that I think people enjoyed about my previous novel, The Paris Diversion—all in one day.

But when I got into the real writing of Lisbon, it became obvious that 24 hours was not a credible amount of time for all the necessary action. So I added a second day and night, then a few chapters’ worth of aftermath for the various plot twists to reveal themselves.

For this novel, as with my others, I was confident from the get-go how the story would end, but I turned out to be wrong—with every single book.

This time around, the biggest gesture is roughly the same as I originally planned, but there are other important twists that I didn’t envisage when I started typing page 1, and those layers to the intrigue make for a much more satisfying puzzle. This is for me one of the tremendously fun parts about writing: coming up with new twists midstream.

Q: Lisbon is the site of much of the book--how did you choose Lisbon, and how important is setting to you in your writing?

A: A few years ago, my family spent some nights at a wonderful hotel in the heart of Lisbon, a sun-flooded suite facing a charming square, a beautiful place to start the day, and I thought: this is almost too perfect, something horrible should happen here.

I love novels that seem at first like one type of story, then turn out to be something very different, and to me this ideal-looking hotel room seemed like a great launching pad for characters who seem extremely lucky, but aren’t; for a story that looks romantic, but isn’t, but then ultimately is; for a plot that appears to be about a missing man, but is really about something else entirely.

There’s a mystery to Lisbon, a mystique of a place that everyone has heard of but not necessarily been to, a vague sexiness. I think that Lisbon is intriguing, in the same way that everything is intriguing: nonspecifically. You know there’s something compelling, but not exactly what. To me, that’s Lisbon. It’s also part of what I hope my novels are.

My previous novels have been set mainly in Luxembourg, Paris, and New York, with smaller helpings of Los Angeles and the East End of Long Island, Switzerland and Sweden, Spain and Iceland and Argentina, Hong Kong and Copenhagen and Oaxaca.

I do some of my most inspired writing when I’m actually visiting these places, sitting at a café with my laptop. I want readers to go there with me.

Q: The writer Cristina Alger said of the book, “Pavone’s stylish, sophisticated thrillers are in a class of their own. In Two Nights in Lisbon, he once again marries an explosive plot with an intimate and nuanced exploration of a marriage and the secrets we keep from those we love the most.” What do you think of that description?

A: I love that description! I’m honored by it. I think Ms. Alger is absolutely terrific, and it’s immensely gratifying that she sees in the book exactly what I hoped readers would.

In the past half-decade, a lot of people have felt compelled to take some type of action in the face of increasingly stark evidence of pervasive problems in our society. I’m one of them. And the urge I felt was to write a novel that’s a little more relevant.

A lot of crime fiction can sometimes feel a bit irrelevant to me—a detective pursuing a serial killer, whatever, books that aren’t really about anything other than an escapist passing of time. I’m old enough to feel that time is too precious to be frittered away, as a reader and also as a writer.

I want to read and write fiction that’s meaningful beyond merely the suspense, something germane to the world we live in, something we can all relate to in some way.

A: My recent habit has been to work on two manuscripts at the same time, like a fistfight, waiting for one of them to vanquish the other. At the moment, both are bloodied but still standing. My sixth book isn’t going to be the result of an early-round knockout.

A: I’m a voracious reader, but I’m also critical to a fault—I can really hate a book with a passion that’s frankly unreasonable. But I feel just as passionately about the books I love, and I just read a few great ones: Marie Rutkoski’s Real Easy, Jennifer Haigh’s Mercy Street, and the aforementioned Cristina Alger’s decade-old debut, The Darlings.