Eimear Ryan is the author of the new novel Holding Her Breath. Her work has appeared in a variety of publications, including Granta and The Dublin Review, and she is co-founder and editor of the literary journal Banshee. She lives in Cork, Ireland.

Q: What inspired you to write Holding Her Breath, and how did you create your character Beth?

A: Holding Her Breath is a combination of my two main passions in life: literature and sport. It's a story about a young woman navigating sporting failure and it's also a literary mystery.

The mystery aspect came first. Two of my favourite artists died within six months of each other--Seamus Heaney and Philip Seymour Hoffman. There was this huge outpouring of sadness and fondness for them both, a sort of collective grief.

I started thinking and reading about the deaths of great artists and the many reverberations and repercussions from their deaths. Then I thought, what would it be like to be related to a figure like that?

That was when Beth came along: the granddaughter of a famous dead poet but immersed in a very different world, that of elite swimming.

It was important to me from the start that she was an athlete--that she was strong and capable, that she knew it, that she carried herself with that physical confidence even if she didn't always feel strong inside.

I think as a young sportswoman you navigate the world differently. You look at your body more through the lens of utility than beauty. I don't think any young woman is immune to the many toxic messages about desirability, weight, and physical vulnerability that we receive from society, but if you are involved in sport you at least have a convincing counter-narrative to those messages.

Q: What do you think the novel says about family legacies and mythologies?

A: Often family stories are so entrenched and so seemingly monumental that sometimes it never even occurs to us to question them. In most Irish families, there’s something that’s not talked about – it might not necessarily be a secret, just something unacknowledged. 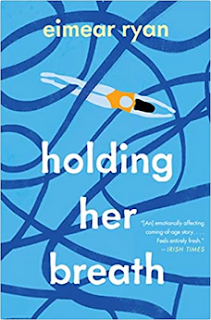 In Beth’s case, it’s the circumstances around the death of her grandfather Benjamin. Her mother and grandmother find it too painful to talk about, but obviously not talking about it produces a different sort of pain in Beth, a sort of longing.

It’s complicated in Benjamin’s case because it’s not just a family myth, but a national literary myth too. Beth is both drawn to and repelled by her grandfather’s legacy: attracted by his brilliance and warmth, but terrified that she has inherited the same demons.

Q: The Independent.ie review of the book, by Meadhbh McGrath, says, “The title of Ryan’s novel nods to the other shadow following Beth: her past as a promising competitive swimmer.” How was the book's title chosen, and what does it signify for you?

A: The title changed many times over the course of the writing and editing process. All along, the various titles I had for it referenced Benjamin’s poetry. Finally, it was suggested to me that the title should really reflect Beth, as it’s her story more than Benjamin’s.

Not only does the phrase “holding her breath” refer to her swimming, but it’s also how Beth’s anxiety manifests. The words “holding her breath” were at one point the last words of the novel (they’ve since changed) but it just seemed to fit as a title, as there are numerous references to breath throughout.

A: Yes – I had the final scene and even the final lines in mind from quite early on. It helped a huge amount to have a finish line to aim for when I was bogged down in the narrative.

The second half of the novel changed quite a bit – originally, Beth went down a completely different avenue on her journey of discovery – but the ending always remained the same.

It’s something I’ll try to have in place when writing further novels, because it really does give you a feeling of confidence to know that your story has a strong ending – it makes the confusing middle a bit easier to navigate.

A: I’ve just finished writing a memoir about growing up as a sports-obsessed girl in rural Ireland in the 1990s. I’m now working on some new short stories and plotting the next novel.

A: I help to run a small feminist publisher called Banshee Press. We publish the literary journal Banshee and a handful of books each year. You can find us online at bansheelit.com.