Claudia Gray is the author of the new novel The Murder of Mr. Wickham, which features various characters from Jane Austen's novels. Gray's many other books include the young adult novel Defy the Stars. She lives in New Orleans. Claudia Gray is the pseudonym of Amy Vincent.

Q: What inspired you to write The Murder of Mr. Wickham, and how did you choose the Austen characters to bring together in the book?

A: The idea came indirectly from Death Comes to Pemberley by P.D. James, in which the murder victim is (SPOILER) Denny. My first through after reading that was, Who cares who killed Denny?

Mr. Wickham was right there being odious, with so many people having reasons to want him dead---to me it seemed like he was the obvious target. Eventually I realized that, if Wickham was going to be killed off, I'd just have to do it myself.

Originally I thought of it being set solely in the world of Pride and Prejudice, but I sat around with the idea for a very long time (years, even) before committing to it. During that time, the other characters had plenty of chances to wander into my thoughts and therefore into the plot.

Q: Without giving anything away (!), did you know from the start how the novel would end, or did you make many changes along the way?

A: I knew who the killer was very early on--basically, from the moment I decided to move forward on it. The plot went from more of a “wouldn't it be nice” idea to something much more concrete. In fact, I'd say that it was my figuring out the right killer that finally convinced me to move forward.

Q: What do you think accounts for the ongoing popularity of Jane Austen's characters, and what's your favorite Austen novel? 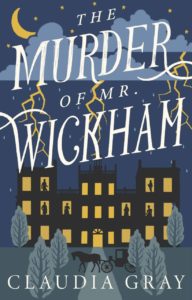 A: Are there any other books more than 200 years old that are still regularly, widely read purely for pleasure? I don't think so, really.

Her characters still live for us, I think, because they are at once so precisely, unmistakably drawn and yet call upon classic personality types at the same time. We can laugh at the very particular idols and grievances of Mr. Collins, for instance, while recognizing that toadying and snobbishness are still very much with us.

Austen wrote with such clarity, wit and insight that her work transcends the very specific time, place, and social stratum it was set within and written for.

As for a single favorite novel--this is hard. Pride and Prejudice is the most fun to read. Emma may be the most accomplished. Persuasion is the most moving. Mansfield Park is the most intriguing...and I have to stop now.

Q: What did you see as the right balance between Austen's original characters and your own take on them?

A: What a tough question! It's difficult, sometimes, to tell the difference between what we see in the characters and what Austen meant for us to see in them.

In this case, the characters were all meant to have had more life experience by the time they reach this novel: A little more than a year for Marianne and Colonel Brandon, but more than two decades for Elizabeth and Darcy.

So I tried to imagine them older, somewhat wiser, but with more subtle versions of the same flaws. No matter how much we grow and change, there will always be certain foibles that get the best of us.

A: I'm editing the sequel to TMOMW--title to be announced later!--as well as taking on some comics for Star Wars. My third graphic novel for DC Comics, the final volume of House of El, will be released early next year. There's more, but I'm not yet authorized to talk about it.

A: Getting to write about these characters has truly been one of the most enjoyable creative experiences I've ever had. You're reading a true labor of love.