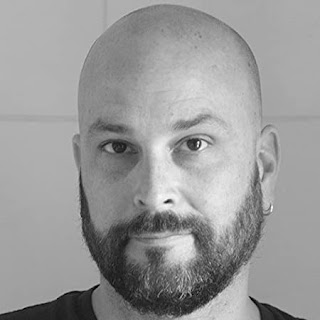 Zachariah OHora is the author and illustrator of the new picture book Fuzzy, Inside and Out. His other books include No Fits, Nilson!. He lives in Narberth, Pennsylvania.

Q: What inspired you to write Fuzzy, Inside and Out, and how did you create your character Fuzzy?

A: The Inspiration is also who I dedicated the book to - which is my wife Lydia. She is Italian with some seriously thick hair and when it gets humid out it gets bigger and bigger and only recently did she realize the connection. For a while she was trying different smoothing products and stuff but you can’t beat the atmosphere.

Q: Did you work on the text first or the illustrations first, or both simultaneously?

A: Usually I make a picture of the character, just for fun. Something that is cute but also makes me laugh. Then I start to think about if that character has a story. After I have an outline and some of the text done I switch back to little thumbnails of scenarios to figure out which words I can cut and just show with the pictures. 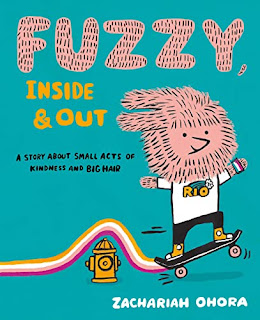 A: When I was in third grade, I won a story writing contest. At the ceremony they had a table full of doughnuts and when the teacher at the table saw that I was one of the winning “authors” she said I could have as many doughnuts as I wanted and that pretty much cinched it. Working for doughnuts ever since.

A: I hope they think it’s funny. Also that Fuzzy, by being himself and being observant, and committing little acts of kindness on the daily, helps to create a community that also helps him out when he needs it most. Besides that, doing nice things for people makes that person feel good and you feel good too. And that’s the core of what being Fuzzy is.

A: I’m working on another book that features the characters from Fuzzy. It’s not a sequel, it just takes place in the same world. It’s about how it’s annoying when people copy you but it’s also a compliment.

I’m also working on a middle grade, possibly YA graphic novel about my own childhood growing up in a strict, fundamentalist household in the 1980s.

A: I have a cute dog named Waffles and even though he’s not that fuzzy, he is also the inspiration for Fuzzy.

Fuzzy’s hair and everything else in the book are painted in acrylic paint on printmaking paper. Old school. No digital.