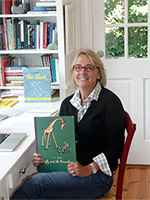 Louise Borden is the author of Full Speed Ahead!: America's First Admiral: David Glasgow Farragut, a new biography for older kids. Her many other books include Ski Soldier. She lives in Cincinnati.

Q: You note that you had heard the name Farragut for many years before writing this book. What inspired you to write about David Glasgow Farragut?

A: Today Farragut’s name is unknown to most Americans, but the words he used in the famous battle of Mobile Bay, Damn the torpedoes…Full speed ahead!, are commonly used.

Learning that our first admiral signed his naval warrant at age 9 was the key inspiration for my embarking on a five-year project. I wanted to explain the why of that phrase, Full speed ahead, to young readers and connect it to Farragut’s remarkable life. I’ve spoken in 600 schools across the U.S., and kids who are 8 and 9 are my wheelhouse.

I’ve also written about the courage and perseverance of other heroes: Bessie Coleman (first African American pilot), John Harrison (solved the scientific question of determining longitude), Raoul Wallenberg (saved thousands in the Holocaust), and Margret and H.A. Rey (the creators of Curious George). I hope Glasgow’s story will stand next to these and inspire young readers.

Q: How did you research his life, and did you learn anything that especially surprised you?

A: My research process for all my nonfiction books is the same: travels, primary sources, maps, photos, paintings, and studying an array of secondary sources.

In the fog of history, there are discrepancies in dates, name spellings, etc. I have to verify each detail I’m including in my text. A kindergarten student once told his librarian that “Louise Borden is…a study-er!”. I love that term. Study-er.

On visits to Atlanta to see our grandkids, I often detoured off I-75 in Tennessee at the Campbell’s Station exit and drove ten more minutes to the site of Farragut’s birthplace, so I could stand alone on the banks of the Holston (now part of the Tennessee River) and in my mind’s eye, picture Glasgow’s childhood and his father's ferry.

This river view was the touchstone of my creative process. (In Cincinnati where I live, we have a historic ferry crossing the Ohio River that has been in operation since 1817.)

I found many facts that surprised me: Farragut was born far from the oceans he later sailed, and soon after he turned six, in 1807, Glasgow took a flatboat journey to New Orleans, almost 1,700 miles! Farragut served under 15 U.S. presidents. Incredible! Two other surprises: his father was Spanish and from Minorca…and at age 9, Glasgow changed his first name from James to David.

I hope young readers will also notice these echoes: Farragut would capture New Orleans, the same city where he’d worked at age 8 at the naval station decades before…and the Confederate ram Farragut forced to surrender in the battle of Mobile Bay was named the Tennessee.

The Farragut Museum in Farragut, Tennessee (the town took this name in the 1980s to honor its famous native son), has excellent sources. I loved seeing the admiral’s desk from the USS Hartford. The Farragut papers at the University of Tennessee as well as the Farragut collection at the Library of Congress were deep wells of information, and all fascinating.

I wanted to see places in Farragut’s life – and convey those details to young 21st century readers. So I went to Chester, Norfolk, Washington, and Mobile Bay, among others. The highlight of my research was a private cruise across the Mississippi Sound to Ship Island, aboard La Dolce Vita with its captain and his wife, to see the deep-water harbor where Farragut anchored his Union fleet in 1862. 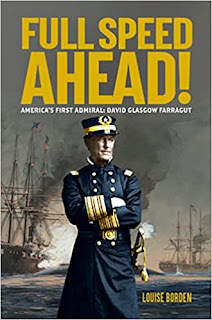 Q: The book also includes photographs, paintings, and other art. How did you choose the art to include in the book?

A: When writing for kids, I’m always thinking about the structure of the book. And how to expand the text in a meaningful way. Farragut’s long life parallels the early history of our nation. How to choose the best from so many events, in color?

Selecting images was a team effort with my editor, Carolyn Yoder. We chose almost 90 images from many more that I’d gathered on my research travels. I made hard copies of jpegs and lined them up and matched them with the text.

Then our talented book designer, Carol Bobolts, began her creative task: to lay out each double spread with text and the selected pictures. And add her own brilliant ideas for composition and design. Carol used the beautiful background of waves, chose the signal flags from the 1809 image on p. 37 to number each section, and found a font similar to 19th century fonts.

So many decisions, all ending in an elegant design. One of my favorite spreads is early in the book, with the image of a vintage compass facing the page with an evocative quote by Farragut.

Plus every image has a caption. My editor was always there by my side as my teacher. Captions take time and thought. And each word counts.

The book went through nine passes, with changes along the way, after the text had been copyedited. The cover went through a dozen colors, fonts, and changes. Even the map (the end papers) was revised several times.

The portrait of James Madison, painted in 1809 just before he appointed Glasgow as a midshipman in the U.S. Navy, is an example of how we wanted the art, and black-and-white photos after the mid-1850s, to parallel the events in the text – to bring this story alive for young readers.

Sometimes I’d see a black-and-white image of a ship and then go down the rabbit hole of tracking down the source (library/museum) of the painting - in color. All of this was quite a journey because before the pandemic shut down our lives in March 2020, we’d already decided which images we wanted.

But then gaining permission/paying fees to use the images - from archives and collections across the country - became a huge task since these institutions were closed, and their curators were working remotely.

The amazing Naval History and Heritage Command is located at the Washington Navy Yard and has a wealth of images and documents. One day, on a research whim, I emailed the NHHC to ask if they, by chance, had David Porter’s signal flag book from 1809 – BINGO! There it was on my laptop screen – in a full-color pdf.

A beautiful new museum is being built, close to the Navy Yard – to make the U.S. Navy’s history accessible to visitors from around the world.

Q: What do you see as Farragut’s legacy today?

A: In 2017, my husband and I attended the navy’s commissioning in Norfolk, Virginia, of the USS Gerald R. Ford aircraft carrier, the largest carrier in the world at the time. Integrity at the Helm was on a large banner.

I think those words are Farragut’s legacy in regard to his naval career. His leadership and integrity resonate throughout his life. As the son of an immigrant who fought in the American Revolution, David Farragut also illuminates the promise of our country. Duty defined his naval life – duty to defend the Constitution – sworn at the age of 9.

I hope those who hear the name Farragut think of his confidence as a leader – as in his words “Damn the Torpedoes, Full speed ahead!” – but also his deep faith in our nation.

Farragut signed that warrant four years before the British burned the U.S. Capitol in Washington. I'd included an image of this event from the War of 1812 (it’s a color mural in a congressional hallway) and was ironically revising text for that double spread on January 6, 2021, unaware that a mob of American citizens had just stormed the Capitol. I still wonder what Farragut would say about the events of that day.

A: I have two manuscripts on my desk. Since college, I’ve been a student of WWII and six of my books are about that time period. So I’ve been revising yet another WWII story that’s a bit longer than the Farragut book, and told in first person.

I’m also working on a fictional picture book with a school setting. This is a familiar world to me that I enjoy returning to after writing a nonfiction text like Full Speed Ahead.

I’m never limited by the age of my audience. I know I can make any subject accessible to children if I have a passion for that subject.

For David Glasgow Farragut, I stepped into a past era and became a 21st century witness to his life, to the loss of his parents, to the ordeals he faced at sea, to his love of country, to his leadership, to his audacity in battle, to his compassion in victory. This is what I want for young readers…to step into the story with me, and see the WOW! about ordinary people who do extraordinary things.