Tina Cane is the author of the new young adult novel Alma Presses Play. Her poetry collections include Body of Work. She is the founder of Writers-in-the-Schools RI, and she has taught creative writing in New York and Rhode Island.

Q: What inspired you to write Alma Presses Play, and how did you create your character Alma?

A: Christopher Meyers, the creative force behind Make Me a World--the imprint at Random House, which put out Alma Presses Play--invited me to write a book, after reading my poetry collection Once More With Feeling. Those poems have a lot to do with an older downtown New York City where I grew up, and Chris was interested in bringing that setting to a younger readership.

The broad strokes of Alma's life align with mine in that she is half-Chinese, was 13 years old in 1982, and grew up downtown New York with a crew of kids. I drew on moments from my own experiences, but it was interesting for me, as a poet, to witness how a character develops as the process unfolds.

I identify with Alma in many ways, but she is distinct from me, almost in spite of me. I've said I wish I had been a more like her at that age--less chaotic, more self-possessed. I became very fond of Alma and her families.

Q: The Kirkus Review of the book says, in part, "By leaning into her love of music and creating her own brand of resilience, she learns that while change is constant, she can decide how she responds to it." What do you think of that description, and what role do you see music playing in the book?

A: I think that's an apt description. Music, any form of art, can play an important role in a person's life. Certain songs today--some of which are in this book--transport me right back to my bedroom when I was 14 or 15 years old, smoking cigarettes and wearing too much eyeliner. 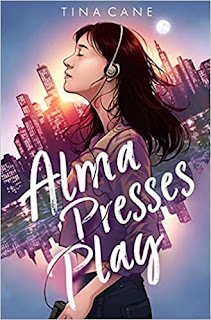 It's Proustian how deeply some lyrics still resonate with me. I recently remarked that David Bowie taught me as much about poetry as anyone--early on, but even today. Like me, Alma will grow up and have the experience of driving her kids somewhere singing songs in the car that she listened to on her Walkman as a girl.

Those sensory experiences also teach us about being a person, about how to move through the world, at what tempo, which rhythms.

Q: The novel takes place primarily in New York City. Can you say more about the importance of setting in your writing?

A: The setting here was the impetus--the initial, crucial element. Setting, like in the work of Thomas Hardy--which I love--can often serve as a character. Certainly, in Alma Presses Play, the cityscape of a few blocks exerts a defining influence on how the characters navigate the world.

Downtown New York during that era was radical and gritty, and often quite dangerous. It informed my approach to the world for years, and is still often my reference point.

A: I made changes along the way. I didn't know exactly how the book would end until I wrote the final scene.

A: I am working on a new young adult novel-in-verse for Make Me a World/ Penguin about a Chinese adoptee named Emily who is growing up in downtown New York, but now--during the waning portion of a global pandemic.

When she switches to an almost all-Chinese middle school, she experiences a disconnect between her culture--being raised by White parents--and her new peers who are Chinese students leading very different lives.

She encounters the work of Emily Dickinson, and ends up using poetry as a way to navigate and understand the changes in her life and the world. I am still working it all out, but that's the rough cut.

I am also finalizing a new poetry collection, Year of the Murder Hornet, out in May with Veliz Books.

A: I like to swim. And I'm itching to go to Rome again.