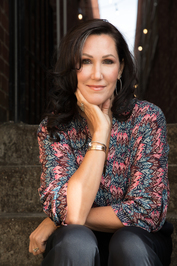 Kimberly Belle is the author of the new novel My Darling Husband. Her other books include The Marriage Lie. She lives in Atlanta and in Amsterdam.

Q: You’ve said of your characters Cam and Sebastian, “Their stories may clash, but ultimately their motivations are the same.” Without giving too much away, can you say more about that dynamic?

A: For me, both as a reader and a writer, the best villains are the ones that have good reasons for doing bad things. This is the case with Sebastian, whose circumstances have forced his back to the proverbial wall. He sees no other way out of his situation, and in his desperation plans the kidnapping of [Cam’s wife] Jade and her kids in order to force Cam’s hand.

And Cam’s not entirely innocent, either. He’s made some mistakes along the way, and now they’re coming back to bite him in the most terrifying way. I realize that all sounds very vague—and on purpose, as I don’t want to give anything away—but ultimately, both men are doing what they must to protect the people they love most.

Q: The novel takes place in Atlanta--how important is setting to you in your writing?

A: Setting is always important to a story, because it provides context for both the plot and the characters’ decisions and actions. My Darling Husband is set in Atlanta but specifically in Buckhead, a neighborhood on the northern end of the city that’s known for its fine dining, designer shopping, and multi-million-dollar homes.

Jade and Cam live in one of those homes, a brick and stone mansion high on a hill. Thanks to Cam’s job as celebrity chef, their wealth and prominence make them an easy target for the masked intruder, who holds them hostage in their own home. It’s a confined, constrictive setting that sets the mood for the entire novel. 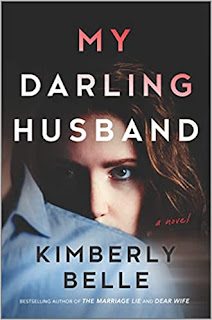 Q: How would you describe the dynamic between Jade and Cam?

A: I love writing about couples with secrets, two people who are deeply in love but one of them is withholding something big. This is where the story begins with Cam and Jade. She doesn’t know of his money problems when the kidnapper demands his ransom, but as the hours tick by, she begins to wonder if he’ll be able to piece together such a huge amount.

Again, Cam has good reasons—in his mind at least—for keeping his business problems from Jade, but where do you draw the line? What are you willing to forgive, and what do you find so indefensible that it destroys your love for your spouse? When it comes to secrets and betrayals, everyone has their own line in the sand, and I love exploring just where that line lies. But one thing Jade never doubts is Cam’s love for her and the kids.

Q: What do you think the novel says about wealth and prominence?

A: You’ve hit on another one of my common themes, one that most of my books explore, as well. There is incredible inequity in the world, and thus money—having it, keeping it—can be a huge motivator.

In My Darling Husband, money drives the plot. Sebastian demands an incredibly huge amount from Cam, who is broke despite (or maybe because of) his huge house and glamorous lifestyle. The story paints the all-too-familiar image of a man living above his means while hiding his struggles from everyone, including his own wife.

A: My stories typically have a lot of moving pieces, so I do like to think through them beforehand. I write from a fairly detailed outline, but even the best of plans can go sideways once I get into the weeds of writing.

Sometimes the pacing is off, or a character’s actions don’t quite fit the personality I’ve given them. Sometimes a character I didn’t plan for walks into a scene and has something essential to say. It’s why I always give myself room to rework the story as I’m writing it, but my beginnings and endings rarely change.

Q: The Publishers Weekly review of the book says, in part, "Several well-placed twists deliciously shake up the brisk plot, which smoothly moves among the viewpoints of Jade, Cam, and the kidnapper." What do you think of that description?

A: You had me at “deliciously.” I love this description, of course, and am always thrilled when reviewers like not just the plot but also the structure. I spend a lot of time thinking about the best way to tell a story, so when a review calls the twists well placed and likes how the various characters’ viewpoints move the story along, I call it a win.