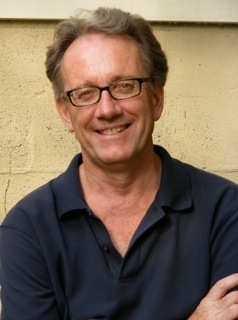 Fred Bowen is the author of the new middle grade book Hardcourt: Stories from 75 Years of the National Basketball Association, illustrated by James E. Ransome. Bowen's many other books include Gridiron: Stories from 100 Years of the National Football League. He writes about sports for The Washington Post's KidsPost section, and he lives in the Washington, D.C., area.

Q: What inspired you to write Hardcourt?

A: James E. Ransome and I had teamed up in 2020 to produce Gridiron: Stories from 100 Years of the National Football League. The collaboration was so much fun I looked around for another upcoming sports “anniversary.”

Sure enough, the National Basketball Association (NBA) was going to celebrate its 75th season in 2021-22. My editor was enthusiastic. So I got to work on a book about the NBA and I was lucky to be teamed up with James again.

The result is Hardcourt: Stories from 75 Years of the National Basketball Association. I am very proud of the book and think it is a book kids and the adults in their lives will enjoy.

Q: How would you compare the two leagues?

A: In some ways the stories of the leagues are similar. They both started a long time ago – the NFL in 1920 and the NBA in 1946 - and did not really catch on with sports fans for many years. The NFL started to become popular in the 1960s, while the NBA grew in popularity in the 1980s.

The games, however, are very different. Football is more of a coach’s game. Coaches set up elaborate plans (now called schemes) for their offenses and defenses. These schemes are often the reasons why teams win or lose games.

So in Gridiron, I had several chapters about important coaches in the history of the NFL, such as Paul Brown, Vince Lombardi, and Bill Walsh.

Basketball, on the other hand, is more of a player’s game. Coaches can make plans and plays but oftentimes the play breaks down and the players have to improvise. Their athleticism and creativity are usually the keys to winning or losing.

So Hardcourt is filled with more stories about the players of the NBA, from George Mikan, the league’s first superstar, all the way through the great players of today such as LeBron James and Stephen Curry.

Q: How did you research this book, and which stories did you find especially compelling?

A: I read a lot of books and articles about basketball. I also watched some key games in the history of the NBA on Youtube. The research was great fun. Basketball has a treasure trove of great writers and a deep literature about the game.

As for stories, some of my favorites include:

The original rules for basketball, written by James Naismith in 1891, had no rules regarding dribbling the ball. Players invented dribbling later.

Some early basketball backboards were made out of chicken wire!

In the 1950s, when the Boston Celtics had to travel from a game in Rochester, New York, to a game in Fort Wayne, Indiana, the team made special arrangements with the railroad because there was no direct service between the two small cities. Players would board a train in Rochester late at night and travel to Indiana and be left in a cornfield 20 miles outside Fort Wayne where they would hitch rides with high school students.

Two men who never played a game in the NBA saved the league in the early 1950s by inventing the 24-second clock and the rule that requires a team to attempt at least one shot every 24 seconds. The two men, Danny Biasone and Leo Ferris, came up with the idea while sipping coffee at a bowling alley. Ferris worked out the calculations on the back of a napkin. 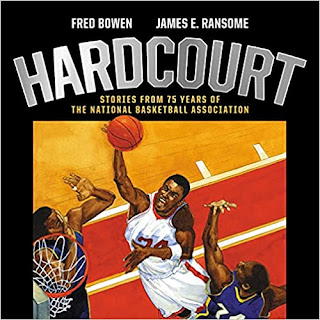 Red Auerbach, the general manager of the Boston Celtics, finalized the trade that brought Bill Russell to the team (and 11 NBA championships over the next 13 years) by promising the owner of the Rochester Royals that the Ice Capades would appear at the Rochester Community War Memorial Arena.

Wilt Chamberlain of the Philadelphia Warriors scored a record 100 points in a game against the New York Knicks in 1962. The game was not played in Philadelphia or New York, but rather in Hershey, Pennsylvania, in front of about 4,000 fans.

After his rookie season with the Chicago Bulls in which he scored more than 28 points a game and was chosen the NBA’s Rookie of the Year, Michael Jordan went back to North Carolina and asked his old coach, Roy Williams, how he could improve. Williams said if Jordan improved his jump shot, he would be unstoppable. So for that summer and for several summers after that Jordan practiced his jump shot for hours every day in an empty gym.

The 1992 United States Olympic basketball team (the “Dream Team”) beat all its opponents at the Summer Games in Barcelona Spain by 32 or more points. The Dream Team’s head coach, Chuck Daly, did not call a time out during the entire tournament.

There are many more stories like this in the book, but you get the idea. I named the book Hardcourt: Stories From 75 Years of the National Basketball Association for a reason.

Q: What do you think James E. Ransome's work adds to this new book?

A: James did a fabulous job of conveying, through his gorgeous illustrations, the beauty of the sport and how the “look” of the game has changed over the years. He also did a great job of not simply painting jump shot after jump shot. For example, his illustration that begins the chapter on Larry Bird and Earvin “Magic” Johnson is a dove emerging from a magician’s hat.

However, my favorite illustration in Hardcourt is the one at the beginning of the chapter on Michael Jordan. It shows Jordan alone in an empty gym practicing his jump shot. Aside from the skillful rendition of the light and its reflections, I think James captures perfectly Jordan’s (as well as so many other players) lonely pursuit of excellence.

As you can see, I think James is a great artist. His illustrations have been essential to both Gridiron and Hardcourt.

A: I am working on a baseball book for my Fred Bowen Sports Story series (Peachtree Publishers). Those are the 24 sports books for kids ages 7-12 that combine sports fiction and sports history and always have a chapter of sports history in the back.

The tentative title of the new book is Extra Innings and was inspired by a photograph I saw in Sports Illustrated more than 10 years ago. The book is scheduled to be published in Spring 2023.

I am also continuing to write my weekly kids’ sports column for the KidsPost page of The Washington Post. It appears on the back page of the Style section every Thursday.

A: During the pandemic, I wrote a history of Major League Baseball similar to Gridiron and Hardcourt. My editor at Margaret K. McElderry Books at Simon & Schuster, however, was not interested in a baseball book. So I am looking for a publisher who might want to produce a book like that for young readers.

If I can, maybe James and I could work together again. I would certainly love to do another book with him.