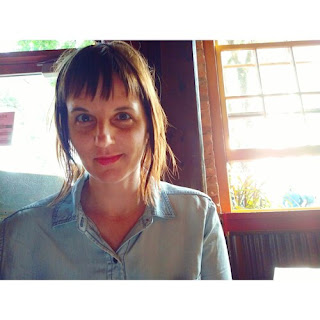 Heather Demetrios is the author of the new young adult biography Code Name Badass: The True Story of Virginia Hall. Hall was a World War II-era spy. Demetrios's other books include the YA novel Little Universes. She is also a writing coach.

Q: How did you first learn about Virginia Hall, and at what point did you decide to write a book about her?

A: I was visiting the International Spy Museum in Washington, D.C., with a friend—I’ve always been obsessed with all things espionage, so when I had a trip to the city to see my friend, we decided to go there.

When it comes to Virginia Hall, it was pretty much love at first sight! I stepped into the section on WWII female spies and they had one of Virginia’s radios that she used in the field, a few of her passports, and a small info card about who she was.

I couldn’t believe I’d never heard of her: an amputee who helped the Allies win WWII, arming the French Resistance and working for both British and American intelligence?! I knew right then that I’d have to write something about her – it felt wrong that young women, that any women, and that the history books themselves weren’t telling us her incredible story.

She really embodies audacity and is such an inspiration for any person, but especially those who are disabled and rightfully feel that their options are limited. She was also a pioneer for women in intelligence.

It pays to be curious and explore—if I’d never been to that museum, following my own personal fascination, I might never have met Virginia or written Code Name Badass.

Q: The Kirkus Review of the books says, “Demetrios tells this fascinating story in an uber-modern narrative voice that is snarky AF, LOL, with plenty of hits to the patriarchy and a glorious sense of celebrating Dindy’s badassery.” What do you think of that description?

I set out to write this book as a seriously researched, well-cited nonfiction that read like an episode of Comedy Central’s Drunk History. I’m tired of reading dry historical accounts that make me fall asleep, accounts that aren’t written in a style that reflects the subject’s incredible courage and moxie and daring. There’s a way to have your cake and eat it, too.

I also wanted to show the ways in which the challenges that Dindy (Virginia Hall) faced are still being encountered by women all over the world today. It was important to talk about the patriarchy and gender discrimination—and ableism—in language that is emotionally resonant, engaging, and no-holds-barred.

History itself isn’t a bore, so I have no idea why we’ve settled for accounts about it that are. I also feel like this book’s style invites readers who might not typically be drawn to doorstopper accounts, but would absolutely love Dindy’s story. 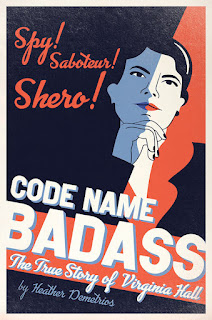 I went to the CIA itself – a thrill! – and got a bit of tour in Langley and met with intelligence officers there, as well as the then museum director Toni Hiley, who curated an exhibit that included Hall.

I also put in a FOIA request for the declassified segments of her file. I discovered some little-known correspondence between Hall and the historian Margaret Rossiter, which is held by the University of Michigan, and they were kind enough to send me scans of those letters.

Of course I went to France, specifically to Le Chambon, Lyon, and Paris, where Virginia Hall worked with the Resistance and her fellow foreign agents.

I hit the books like nobody’s business—the easiest part of the job, though it required me to track down a lot of intelligence accounts that had gone out of print. I viewed so much microfilm—that’ll make you cross-eyed! And it was a thrill to find the articles Hall had written during the war, working her cover as a journalist.

I had to do a deep dive into WWII in France (and the war as a whole), as well as the intelligence work being done by the Allied and Axis powers. It was tough reading Gestapo interrogation reports, and to see the ways in which sexism hurt the many brave women who gave up so much to join the fight. (I have a major bone to pick with Charles de Gaulle).

Finally, I decided to go to the Ravensbrück concentration camp, where many of the women I researched who had worked with Virginia or were spies in the same agencies, ended up. There’s a beautiful monument there for the women of France and for the women of SOE who were imprisoned there—many of them died.

I think the biggest surprise, honestly, is how Hall was treated after the war. The CIA never sent her out into the field and, though she was one of the first women to make Career Staff, in the end she was sidelined with a desk job. She had more experience in combat and field work than nearly all of the men she worked with, including the directors of the CIA. I guess I shouldn’t have been surprised…but I was.

Q: What do you see as Hall's legacy today?

A: I have to say, I’m tired of how often we women tell our stories and things don’t change. There is still a huge pay gap and COVID has set back women’s presence in the work force in a big way.

Now we have our rights to our bodies under threat in addition to the staggering rates of violence against women. We still haven’t had a female president and only one female director of the CIA.

But I think Hall’s legacy is that a disabled woman who is told a no a lot can still get the job done, through her own grit and tenacity. I know there are women at the Agency who are deeply inspired by her—one requested to have one of Dindy’s code names when she went into Afghanistan, for luck.

I would just hate for Dindy to become yet another face to put on a mug at a cute boutique and then forgotten about. The fact that I wrote this book and young women are reading about her shows that her legacy is a work-in-progress. I really hope I get a letter someday from a young woman whose life path was inspired by Dindy.

A: Writing a biography is a huge undertaking, so I’m taking a break! I had two books come out during COVID so far (the other was a novel, Little Universes) and I, like so many others, am reassessing what’s next.

I have a couple of women I’d love to write another biography about, but I suspect that with COVID, doing the research will be too hard. I have a couple of projects I’m dipping into, but I’m really focusing on the work I do with female-identifying writers—I’m all about mindfulness for writers and I think there’s a book in there, with all that work.

A: I think Virginia Hall would be rolling in her grave if she knew she was getting so much attention as of late. She always felt it was gauche to talk about one’s accomplishments.

I went to where she’s buried in Maryland and just let her know I hope it’s okay, that I wanted to do right by her and her story. It’s very strange, spending so much time with someone you will never meet.

I’m so grateful for the experience, and how much it required me to stay in my integrity, whether it be citing a fact or double-checking I wasn’t putting words in anyone’s mouths. We need more of that these days, and it felt good to do it right.