Robert McCaw is the author of the new mystery novel Treachery Times Two. It's the fourth in his Koa Kāne series, set in Hawaii, which also includes Death of a Messenger. McCaw lives in New York City.

Q: In an Author's Note, you write that “some people let their flaws define them while others strive to overcome theirs.” How does that theme play out in the novel?

A: Koa Kāne, the protagonist in this mystery series, is a cop with a secret criminal past. He accidentally killed his father’s nemesis and covered up the crime.

That personal history defines him. On the one hand, he is remorseful and driven by guilt to make amends. That’s in part why he became a cop. On the other hand, it also gives him a powerful insight into the criminal mind. It makes him unusually observant and suspicious at any crime scene, determined not to be fooled the way he fooled the cops investigating his crime.

In Treachery Times Two, Koa’s past comes roaring back at him, threatening his career, his relationship with Nālani, the love of his life, and even his freedom. To survive, he must maintain the coverup that has protected him for 30 years.

Yet, as the story progresses, the stakes get higher and higher, forcing Koa to reassess the balance between the good he has done to make recompense and the escalating price of preserving his secret. His struggles intensify as he approaches the redline beyond which he is not prepared to go to save his reputation.

Koa is not the only character with a secret past, and as the story unfolds, we see just how far others will go to hide their own misdeeds and whether they, too, place limits on the price of maintaining secrecy.

Q: How would you describe the relationship between Koa Kāne and Kawika Keahi? 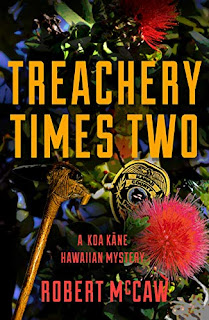 A: Koa and Kawika are childhood best friends as close as brothers, living in each other’s homes, sharing meals, canoeing and fishing together. Both pursue successful careers—Koa as a police detective and Kawika as an aide to Hawai’i’s senior U.S. senator. Yet, both have secrets, and each deals with them in vastly different ways. How those secrets affect their relationship is at the heart of Treachery Times Two.

A: Dictionaries define treachery as a betrayal, treason, or a violation of allegiance, faith, or confidence. At its most basic level, Treachery Times Two is about betrayal. That accounts for the first word of the title and points the reader in the right direction.

The rest of the title—Times Two—adds a bit of mystery. Perhaps it’s like double trouble, suggesting the reader will encounter a particularly odious form of treachery. Then again, maybe there are two separate betrayals. The novel hints as much as it branches into two apparently different but ultimately intertwined stories.

Q: Do you have any (other) favorite novels set in Hawaii that you'd like to recommend?

A: I never miss an opportunity to recommend Hawaii by James A. Michener. It’s a wonderful introduction to the history and geography of the Islands.

A: As is, unfortunately, the case in the real world, crime never stops in Koa Kāne’s Hawaiʻi. His pursuit of justice will most assuredly take him to isolated coves, black sand beaches, and other little-known backwaters of the Big Island. So there’s likely to be another Koa Kāne mystery in the not too distant future.

A: In each of the Koa Kāne mysteries, Hawaiʻi itself is a character. In contrast to the fictional stories and human characters I create, Hawaiʻi is real.

While alluringly unique in ways, it is also a microcosm of our modern world with its share of delights and problems. Hawaiʻi’s stunning vistas and geological wonders live side-by-side with poverty, ethnic tensions, sovereignty movements, substance abuse, climate change, and other evils.

In contrast to the tourist-driven imagery of luxury hotels, pristine beaches, and swaying palm trees, Koa lives and works in the real Hawaiʻi.