Stephen Costanza is the author and illustrator of the new picture book biography King of Ragtime: The Story of Scott Joplin. His other books include Mozart Finds a Melody. Also a musician, he lives in Maine.

Q: What inspired you to create this picture book biography of composer Scott Joplin?

A: Well, first would be my love of Scott’s music. It’s as much fun to play on the piano as it is to listen to.

I remember how spellbound I was when I first heard Joplin’s rags. I was a kid taking piano lessons at the time, and overnight I wanted to play ragtime.

But from the moment I saw the sheet music to his “Maple Leaf Rag,” with all those notes crammed one on top of the other, I wondered how on earth was I going to play it. With superhuman patience, my piano teacher Mrs. Field sat by my side every Tuesday after school, and together we worked out the intricacies of the score.

I’ve been performing Joplin’s music for a while now, but even today, it’s like playing it for the first time. There’s always something new, something more to discover. I can’t imagine what life would be without it.

Secondly, I was inspired by Joplin’s courage. Scott was an African American living during the time of Jim Crow, an era of extreme racial prejudice and discrimination. There were very few career opportunities for a young man like Scott, and the idea of being a composer was simply unheard of. But Scott came from a musical family. He had music bubbling inside him, and he had to set it free.

Now, it’s one thing to summon the courage and self-confidence to be a composer, but try doing that when all of society’s cards are stacked against you because of your race. It gives me chills just to think about it. His courage in the face of adversity is perhaps as great a legacy as his music. I wanted to
share that message with readers.

Q: How did you research Joplin's life, and did you learn anything that especially surprised you?

A: I read several biographies of Joplin, as well as histories of jazz and popular dance. I looked at a ton of photos for reference, especially those from the days immediately following the Civil War.

I wanted to see the clothes people wore, the tools they worked with, the instruments they played. I looked at pictures of old locomotive engines. I studied typography from the era. I travelled to St. Louis in 2017, and visited the Scott Joplin House State Historic Site, where Joplin lived from 1901 to 1903.

In 2017 I was also in Sedalia, Missouri, for the annual Scott Joplin Ragtime Festival. Sedalia has become a kind of Mecca in the ragtime fandom world. The city had a thriving African American community.

The years Scott lived in Sedalia (mid-1890s) were pivotal ones for the young musician. He taught piano, played at local clubs, and sang in a vocal quintet. Scott also began studies in harmony and composition at the George R. Smith College for Negroes, and eventually published the “Maple Leaf Rag,” which would soon become the most famous ragtime piece of its day.

Not only that—I was surprised to learn that Joplin had helped organize a baseball team in Sedalia, the Shortridge-Robb Baseball Club.

It was also in Sedalia that I met Edward A. Berlin, author of the foremost biography on Joplin: King of Ragtime, Scott Joplin and His Era. Ed would later lend his incredible knowledge and expertise in answering questions I had about Joplin’s life. It was from his book that I discovered about the baseball club.

Q: The Kirkus Review of the book says, “Writing with a bit of a twang and punctuating the narrative with idioms and onomatopoeia, Costanza delivers a biography as bouncy and colorful as ragtime itself.” How did you create the text and illustrations to reflect the music?

A: I began to think of what I liked about the music. As a pianist, one of the cool things about ragtime is the tension created by two things happening at once: the left hand pounding out a steady on-the-beat pulse, while the right hand plays the syncopated, off-beat melody. One could say the left hand is earth-bound, while the right hand wants to dance and soar like a bird. 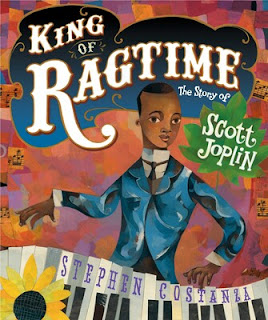 What we hear is a melding of African and Western ingredients—a patchwork of musical styles. I thought this patchwork might play out well in large shapes of color. A collage-like application of colorful paint and cut paper, to echo the exuberance of the music.

I tried to approach the writing the same way. I wanted to use a vivid, visual language that had something of the spirit of ragtime in it. But while searching for words that had both meaning and musicality, I also tried to remember that words are only part of a book’s “audio track.”

There are other sounds, and sound effects to consider, like a rackety train ride, or middle-C on the piano. How can these sounds figure into the “audio” as well?

To me, music is the most magical of the arts. When creating picture books about musicians, the question always is: how can a composer’s music be expressed in pictures and words? In the end, I rely on a very personal interpretation of the sounds I hear. It’s not always easy, but very often the challenge becomes the inspiration.

Q: What do you see as Scott Joplin's legacy today?

A: Beginning with the enormous popularity of “Maple Leaf Rag” (the first piece of sheet music to sell over one million copies) and in the years that followed, 1900-1917, we can see ragtime as the first great impact of Black culture on American society.

Scott Joplin didn’t invent ragtime, but of all the ragtime composers, he was the greatest. His rags stand out today due to the high standards to which he aspired, as well as to his determined belief in ragtime as a serious form of music—a belief that, decades after his death, was validated by his belated enshrinement as a major American composer.

His single-minded determination to merge African American music with the traditions of mainstream Western composition prefigured, in many regards, the later development of jazz.

By straddling the borders of art music and popular music, African polyrhythm and European formalism, Joplin anticipated the great achievements of later artists such as Duke Ellington, James P. Johnson, Benny Goodman, and Art Tatum, among others.

It’s also important to remember that ragtime was THE dance music of the day. Coupled with the Cakewalk, ragtime created an appetite for popular dance that has continued to this very day. And many of these dances, if not all, have their roots in African American culture and community.

A line can be traced, beginning with the Cakewalk, to the Charleston, the Lindy Hop, the Twist and still others, leading right up to Hip Hop. The fuse was lit way back in 1899 with “Maple Leaf Rag” and has been sizzling ever since!

A: Currently I’m working on the illustrations for a book entitled Way Up in the Woods, written by Bill Wise.

I’m in the sketching/planning stages for books about composers Fanny Mendelssohn, Philip Glass, and Claude Debussy. Also the great pianist-composers who came of age in Harlem immediately following the ragtime era: Art Tatum, Fats Waller, James P. Johnson and others.

Lastly, I’m trying my hand at a collection of 10 Creepy Tales from Maine, for middle-grade readers. It’s lots of fun writing about weird kids and monsters in the state where I live.

A: Happy new year to all! Wishing everyone health and happiness in 2022.

If anyone has any questions about playing ragtime on the piano, or how to be an illustrator-author, please feel free to write!

Lastly, thank you Deborah for the opportunity to be interviewed, and all the great work you do in books and literature for readers of all ages.