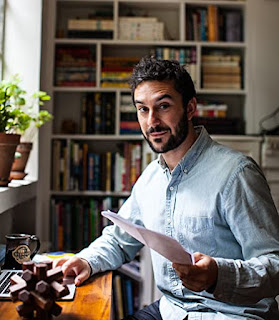 Adam Rubin is the author of the new children's picture book Gladys the Magic Chicken. His other books include the forthcoming middle grade work of fiction The Ice Cream Machine. He is based in Brooklyn.

Q: What inspired you to write Gladys the Magic Chicken?

A: I was scrolling through Twitter one day when I noticed a drawing of a chicken that was posted by Adam Rex. I found the illustration highly evocative and in a burst of inspiration, I wrote to Adam asking what he thought of my idea for a book called Gladys the Magic Chicken. He replied with something to the extent of, "If you write it, I'll illustrate it."

A few months later when I sent him the manuscript, he confessed that he thought I was joking.

Q: The Kirkus Review of the book says, "Written with a cheeky tone, this offbeat story puts a modern spin on exaggerated archetypal characters known only by their capitalized titles, including a Traveling Merchant, the Brave Swordsman, the Learned Princess, and the Fearsome Pirate." What do you think of that description, and how did you come up with your casto of characters?

A: I was reading a lot of Joseph Campbell right before I started writing Gladys and I was definitely inspired by his analysis of the mono-myth and other works of comparative mythology.

I was imagining a "Fractured Fairytales" style take on the story that's been told a million times before: What if the hero in the 'hero's journey' didn't know they were a hero? What if they were a chicken? What if I could use the word ploop as many times as possible? 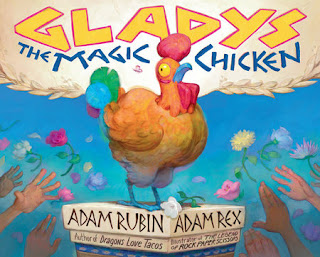 I needed a colorful cast of memorable characters to populate Gladys' world—to drive the action full circle. It was fun to put little twists on archetypes from other stories. I guess "cheeky and offbeat" sounds OK to me.

Q: What do you think Adam Rex's illustrations add to the story?

A: Adam's illustrations really brought the story to life. One of the most wonderful things about writing picture books is seeing a talented artist visualize ideas that had only previously existed in your imagination.

It's a pleasure and a thrill to get to work with someone like Adam. Aside from enriching the text, his unexpected color choices, hilarious character designs and dramatic compositions added multiple new dimensions to the story.

Q: How did you first get interested in writing children's books?

A: A college friend introduced me to Daniel Salmieri back in 2007. Dan wanted to illustrate picture books and I wanted to collaborate with Dan so I wrote a story called Those Darn Squirrels based on my dad's backyard battles during my childhood. A year later it was published by Houghton Mifflin.

I know this is not the typical way that people break into children's publishing and lest some folks feel discouraged by my dumb luck, I'll mention that when I pitched Dragons Love Tacos to our original publishers, they said no. They said it was "too silly." It has now gone on to sell a bajillion copies. So who knows? If you like something, keep pitching it. Maybe you see something nobody else can see yet.

A: Right now I'm working on shouting from the rooftop about my new book The Ice Cream Machine. It comes out Feb. 15 and I'm a little nervous because it's my first "big" book and I've never done anything like this before. The middle grade process is so different from making and sharing a picture book. 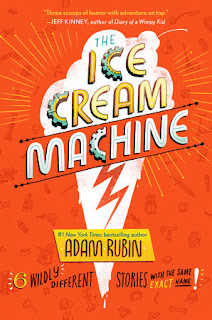 My hope is that by showing young readers how a bunch of fun stories can come from the same starting point, it takes a little pressure off of having some "big idea" in order to start writing something. To give them a further nudge to put pen to paper, I suggest they start with the same title as I did.

After the six Ice Cream Machine stories in the book that I wrote, there is a seventh one that hasn't been written yet and an invitation for the reader to write their own version and send it to me. I even hid a self-addressed envelope under the dust jacket of the book and I'm seriously planning to read every story that gets sent in. Experts have advised me that I may live to regret this...

Regardless, if I receive enough responses before the end of the school year, I will be able to include the best ones in the paperback edition of the book! I think it's pretty cool that some 8-12 year old kids might become published authors.

If The Ice Cream Machine can help motivate students to experiment with narrative writing and share their imagination with the world, that would make me very, very happy.