Carla Guelfenbein is the author of the novel One In Me I Never Loved, originally published in Spanish and now available in an English translation by Neil Davidson. Guelfenbein's other books include In the Distance With You. A Chilean native, she has worked as an art director for BBDO and a fashion editor at Elle.

Q: What inspired you to write One In Me I Never Loved, and why did you decide to center the book around poet Gabriela Mistral and her partner Doris Dana?

A: I began writing this novel while I was stranded in Manhattan for a few months. Those were days of walking aimlessly, talking with strangers, spending hours in a cafe observing, listening, taking notes. This is the scenario where the five women from One In Me I Never Loved emerged.

The novel begins with Margarita sitting on a bench - an artwork by the artist Jenny Holzer - in front of the gates of Barnard College, waiting to see her husband appear with one of his students. She is convinced he is cheating on her. She wants to confront him; she wants her life to explode.

But before her, it was me who sat on that bench while I was waiting for a friend. Suddenly I realized that some very powerful phrases were carved on its surface, such as: “Push yourself to the limit as often as possible," “Expiring for love is beautiful but stupid.” Phrases that, thanks to the kindness of the artist, ended up being part of the novel.

Another of the characters, Anne, the concierge who disappears in the novel, is a girl who I met every morning at the doors of the place where I was staying, and with whom, I felt, a complicity was weaved, even though she would never speak to me.

The third character, Elizabeth, the girl who makes love to an older man every afternoon in a room facing the street, emerged from an image, that of my own window, through which I listened to the sounds of the city.

I also discovered that Doris Dana lived just a couple of blocks from Columbia University, the same place where I was wondering about. It was too literary a coincidence to pass up.

From that meeting in Barnard, Doris began to write and search for the poet, until Gabriela agreed to meet her in Mexico. A love relationship started between them, which lasted until the poet died in 1957. This love is reflected in the hundreds of letters that Gabriela sent to Doris. In her words, the passionate love that united them is evident, a love that the Mistralists have tried to pass off as filial.

Once Mistral entered the novel, I was interested in showing that aspect of her that had been forbidden and concealed under the image of an almost virginal, boring woman, detached from the carnal, who does not respond at all to her true nature. I think that knowing this, gives us a different and essential look at her work. 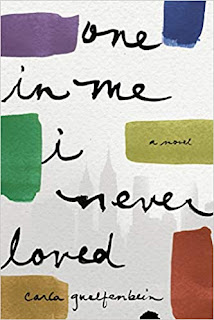 A: Many of my novels have a political and historical context. Contexts which move with the characters, but which do not constitute its center.

This is the first time I interweave fiction and reality in such a literal way. While reading the hundreds of letters Gabriela Mistral sent to Doris Dana, I imagined their intimacy. I gathered from her words that this relationship was complicated.

Doris resented Mistral´s genius. She wanted to be a writer and having Gabriela by her side wasn´t helpful at all. All her inabilities and lack of talent to do so, became evident in front of the poetic talent of Mistral. Moved by these feelings of suffocation, Doris would run away from time to time to New York, to her previous life.

Mistral herself wasn´t fully happy neither. She always was made to feel insecure by Dana´s youth and beauty. She was 31 years older than her.

This was my starting point. I imagined Doris all by herself in the big city trying to be someone, trying to find the lost thread to herself, but at the same time, being followed by the phantom of Gabriela´s love and longing.

Q: What do you think of Neil Davidson's translation?

A: I think he did beautiful work. Translation is itself an exercise of writing, and Neil himself is a great writer. I admire his prose, his way of constructing the sentences, and the delicacy of his language. I feel some of the passages in the English version of One In Me I Never Loved are even better than the original. I am very grateful to him and to Other Press for choosing him.

A: A couple of months ago I finished a novel that will come out in Spanish-speaking countries early April 2022. It explores the limits of passionate love. This will undoubtedly be my most daring novel. Exploring passion meant having to enter areas that I had only touched upon before.

In the backroom of the writing of this novel there was always Spinoza's aphorism: "Nobody knows what a body can do." I was interested in exploring the limits of a heart and a body under the influence of passion. What motivates it, what makes it lethal, what power has our judgement, our sense of logic, and our wisdom in dealing with it. And most of all, how disarmed they stand before it.

A: One In Me I Never Loved is my eighth novel, and looking back I can distinguish certain constants in them, such as the choral novel. Reality seen through different eyes and experiences.

This responds to the idea that the absolute and incontestable reality to which we aspire, does not exist. There are as many realities as there are individuals, and an experience, a shared moment, is never unequivocal, but at most, the sum of the experiences that its participants have from that moment.

Maybe another aspect that my novels have in common is that they all focus on the intimacy of the characters. What interests me is what happens behind closed doors, what is hidden, what is shameful, what hurts, what moves us and can´t be said.