Kimberly Jones and Gilly Segal are the authors of the new young adult novel Why We Fly. They also have written the YA novel I'm Not Dying with You Tonight. They are both based in Atlanta.

Q: What inspired you to write Why We Fly, and how did you create your characters Eleanor and Chanel?

A: Why We Fly was inspired by a group of cheerleaders at Kennesaw State University who took a knee during the national anthem at a football game. We live close to Kennesaw and followed the news as the cheerleaders were disciplined - thrown off the field for future games, lost scholarships and didn't make the team the following year.

We had just finished writing our first dual-narrative novel in a "ripped-from-the-headlines" style and this story jumped out at us as the next right thing for us to tackle.

We knew we wanted to introduce a related, but new world from that of our first novel, so we could put different lived experiences on the page. Thus, we set the school in a predominantly white community, with two characters who had grown up there.

Chanel is a character who is grappling with racial microaggressions, in a way, for the first time. Eleanor is Jewish and considers herself an ally in social justice work, but that is tested when discriminatory treatment her friend receives is laid bare to her.

A: We began working on the manuscript in 2017/18, when many athletes were taking a stand to protest racial injustice and police brutality. Athletes like Colin Kaepernick and the Kennesaw cheerleaders were suffering real consequences for their protests, from being fined to losing their place on teams. 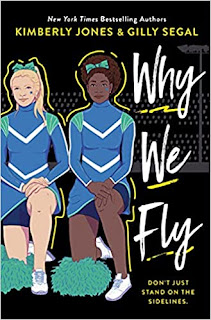 By early 2020, we'd completed a draft of the novel, when a wave of demands for social justice ripped through the nation. Suddenly, even professional leagues were changing the way they spoke about social justice and athletes' right to protest.

National sentiment was changing. But we didn't want to overlook the years before, when the conversation around athlete-activists was so toxic and intolerant. We wanted readers to reflect on the before, not just the after. So, we set the novel in 2019.

Q: In a review of the book for NPR, Alethea Kontis said, "I admit I was surprised by the book's ending, but I think I liked it all the more for that." Without giving anything away, did you know how the book would end before you started writing it, or did you make many changes along the way?

A: We had no idea! The final few chapters stole into the book like a thief in the night. Like with our first novel, we knew we weren't going to write a tied-up-with-a-bow neat ending. We knew the events the girls lived through would profoundly impact them and their friendship and it always seemed implausible to us that they would end in the same place they began.

However, the specifics? Those came to us through the writing and revision process. We're big fans of revision! We believe our books find their true north in that process.

Q: How do the two of you collaborate on your books? What's your writing process like?

A: Our process has changed from project to project. For Fly, we plotted and wrote the entire thing sitting side by side. We've discovered we're much more efficient and effective doing that than trying to swap chapters back and forth.

Kim is an auditory person and Gilly is visual, so we both talk out scenes and ideas and write them out. It works for both of us because we lean into our strengths and lean on each other to shore up our weaknesses.

A: We're at the beginning of concepting a couple of new co-authored projects! This part is the most fun for us because we sit around bouncing ideas off each other and it's part of why we love to be one another's creative partners so much.

The down side is - nothing has crystallized quite yet, so it's hard for us to say, specifically, what's next beyond saying they're both dual narrative YA and MG concepts.

A: We're really proud of the Jewish representation in this book! Leni's Jewish identity and community plays an important role in her journey and it was important to us to put that on the page.