Antoine Wilson is the author of the new novel Mouth to Mouth. His other books include Panorama City, and his work has appeared in a variety of publications, including The Paris Review and StoryQuarterly. He lives in Los Angeles.

Q: What inspired you to write Mouth to Mouth, and why did you construct it in the form of a long-ago acquaintance telling a story to an unnamed narrator?

A: The ur-seed of the novel comes from a visit to Seattle I took with some friends back in 1997. We were down by the waterfront and there was a guy walking along, headphones on, air drumming and not looking where he was going, which was directly into the path of a moving freight train.

I got his attention and stopped him just in time, after which he said to me, "Oh my God! You saved my life! I'm going to buy you a big steak dinner!" Then the train went by and he kept walking. I never got my steak dinner, and my friends razzed me for years.

About 10 years ago I started playing with the idea of someone saving someone else's life, and what might emerge from the strange and powerful dynamics that arise after such an event.

As for the as-told-to aspect, the reasons are many, but the short answer is that after trying to find the right form for this material for far too long, it was what felt right.

Q: The New York Times review of the book, by Sarah Lyall, says, "This powerful, intoxicating book’s greatest tension is that we have no idea where it is heading, right up to the shocking final sentence." What do you think of that description?

A: I've heard from many readers about the tension they feel coming from the book, and I do think the ending addresses that tension, but as the only person around who can't actually be the reader of my book, I have to take their word for it.

I can say that my own ambivalence and uneasiness about Jeff's story is folded into both the narrative and the structure, so I'm happy it's coming through.

Q: You've said, in response to comparisons with Patricia Highsmith, Don DeLillo, and Donna Tartt, that "the center of the Highsmith-DeLillo-Tartt Venn diagram is a place I'd be very happy to find Mouth to Mouth." How do you think your book might fit into that Venn diagram? 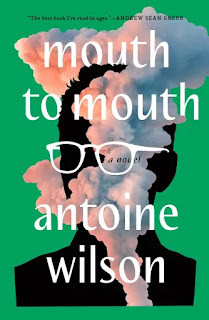 A: I should have added a caveat that these kinds of comparisons are extremely limiting and threaten to diminish the uniqueness of each individual work!

But there's something to be said for the "if you liked X, you might like Y" algorithm, even when it doesn't work perfectly. We have to discover new works somehow, and I think that someone whose interest is piqued by that Venn diagram will find a satisfying read in Mouth to Mouth.

As for how and why it might fit: Highsmith's Ripley has come up in a lot of reader reviews, and I understand the comparison between Tom Ripley and Jeff Cook, both of them being slippery in terms of identity and intention. (I would argue, though, that I'm after something different than Highsmith.)

Don DeLillo once said somewhere that he thinks of writing as a "concentrated form of thinking," and though I'm perhaps not as explicitly thinky as he is, readers might catch a whiff of compressed ideas in my prose.

As for Donna Tartt, or more specifically The Goldfinch, I suppose it's a matter of material. A young man initiated into the ethically gray world of art and wealth and so on...

Q: Discussions of your book have included the theme of the unreliable narrator. Do you think either the narrator or Jeff is unreliable?

That said, Jeff's story, with its retrospective cast and its salesman of the self vibe, is unquestionably self-serving. The ambiguity lies in the question of whether and how much he believes it himself.

The unnamed narrator, on the other hand, isn't meant to be tricky in any particular way, though his writing the novel itself--his passing on Jeff's story--comes with its own ethical questions, especially in light of the book's final sentence.

A: A disappointing follow up? Actually, I'm in early stages of gathering elements for the next book. Woolgathering, as it were.

A: Fun fact: Jeff's description of meeting Agnes Martin is basically a transcript of my own experience.