Heather Gudenkauf is the author of the new novel The Overnight Guest. Her other books include The Weight of Silence. She lives in Iowa.

Q: What inspired you to write The Overnight Guest, and how did you create your character Wylie?

A: The inspiration for The Overnight Guest came from where many of my ideas do – the news.

I was researching possible story ideas and came across an article that discussed a young Wisconsin woman who crashed her car into a ditch during a snowstorm. The woman ventured from the safety of her car to find help and overwhelmed by the snow and the cold, she collapsed.

She was discovered the next day, eyes frozen open and near death. Medical professionals couldn’t even get an IV into her frozen arm – the needles kept breaking.

Incredibly, the woman lived, and the story got my writer mind buzzing. I began to explore the idea of what would happen, if during a blizzard, someone found a strange child on their property. From there I began to wonder what if this discovery was connected to something much more far-reaching and sinister and The Overnight Guest was born.

I’m also obsessed with true crime and the idea of having a main character who was a true crime writer really appealed to me.

Wylie was so much fun to write. Here’s this woman who travels across the country detailing the most gruesome of crimes and she finds herself caught up in a cold case, finds a nearly frozen child in her front yard, and gets stranded in an old farmhouse during the blizzard of the century.

It’s a lot, but if anyone can handle it, Wylie can, because of course, she’s got a complicated past and a fierce will to survive.

Q: The author Hank Phillippi Ryan said of the book, "The oh-so-talented Heather Gudenkauf has created a modern day In Cold Blood." What do you think of that comparison? 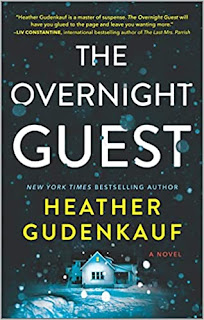 A: When I read Hank’s review I was floored. I don’t think I’ve ever received a nicer compliment. I mean, In Cold Blood! I’m so grateful for the support I get from the writing community. It’s always thrilling and humbling when fellow author enjoys your work.

Q: The novel is told in three alternating strands--did you write the book in the order in which it appears, or did you focus more on one point of view before turning to the others?

A: Writing stories with multiple points of view and shifting timelines is really my favorite mode of storytelling. Before I began writing I knew the three storylines I wanted to focus on and how I wanted them to eventually come together, but how I got there was filled with many false starts and roadblocks.

I began with the chapters set 20 years earlier and then began to work on the Wylie-blizzard scenes. As I got to know my characters better, I wove in the mother and child sections.

Discovering those surprises along the way – about plot, characters, even the ending – is my favorite aspect of writing. It’s those crazy OMG moments that pop up along the way that make what I do so much fun.

Q: Much of the book takes place during an overwhelming snowstorm. How important is setting to you in your writing?

A: As with all my novels, the setting of The Overnight Guest was crucial to the telling of the story and to me, just as important as character and the plot development.

I live in Iowa, which many consider a bland, flyover state when it really has a beautiful, varied landscape. Living in the Midwest, blizzards are a reality and we’ve had our share of epic storms over the years.

In The Overnight Guest I needed Wylie to be secluded from the outside world, which was very tricky in a world filled with cell phones. Enter the snowstorm. Even modern technology can’t contend with a good old-fashioned blizzard.

Burden, the fictional Iowa town where the novel is set, is inspired by all the great small towns I get the pleasure of traveling through and visiting.

Interestingly, on the rural gravel road near the farmhouse where Wylie is staying, there is a tree growing straight up in the middle of the road. That tree plays a critical role in the novel and is based on a real tree found in Brayton, Iowa.

Supposedly, over 161 years ago, a surveyor placed a green cottonwood stick into the ground at the exact spot the county line was to be drawn. Today the tree is over 100 feet tall and 18 feet wide.

It’s such a unique spot and a fun story, I knew I had to include it in some way in The Overnight Guest. I love sharing little fun facts about my home state with readers.

A: I’m still early in the process of writing my 10th novel and storylines and characters tend to change, so I’m not able to share much. What I can say is that book 10 will take readers outside my home state of Iowa and introduce them to some of my most chilling characters. I promise one wild ride!

A: I love connecting with readers! Please find me in the following spots and we can chat about all things bookish!