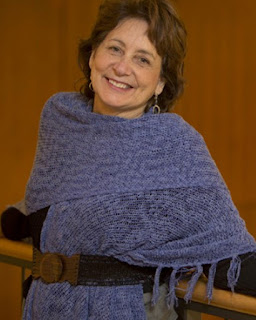 Liz Rosenberg is the author of Scribbles, Sorrows, and Russet Leather Boots: The Life of Louisa May Alcott, a new biography for older kids. Rosenberg's other books include House of Dreams: The Life of L.M. Montgomery. She is a professor of English at Binghamton University, and she is based in Worcester, Massachusetts, and Binghamton, New York.

Q: What inspired you to write this biography of Louisa May Alcott?

A: I first read Little Women in kindergarten (I know) and re-read it four times before I graduated elementary school. Needless to say it was love at first sight. Beth was my favorite character back then.

And, probably just as important, the first biography I ever read (and also still own) was Louisa May Alcott, Girl of Old Boston. Well, I just loved that I could read a book about a book writer. It made writing seem possible. And I loved the story of her adventures.

In terms of why did I write it now, the immediate answer is that I just published a book on L. M. Montgomery, author of Anne of Green Gables, a few years ago, called House of Dreams: A Biography of L. M. Montgomery, and Louisa was simply the next logical choice.

Those are two of my all-time favorite writers. They are both women. They both lived in a time (and in places) that fascinates me. And they both have names that start with L. M.--as do I.  Funny, the peculiar little ways we draw connections.

Q: You write of Alcott, "Her life was as gorgeous as her art." Can you say more about that?

A: Louisa's life WAS as gorgeous as her art--sometimes even more so, perhaps. She was a loyal friend, a devoted family member; she was full of fun and loved "jolly times." She was self-sacrificing to a fault, other-regarding and so forward-looking in her views we are still running to catch up with her two centuries later.

Her work for the poor, for women's rights including the essential right to vote; her passionate opposition to slavery; her willingness to labor hard and long for her art; her scorn for conformity-- all these things make up a gorgeous life. 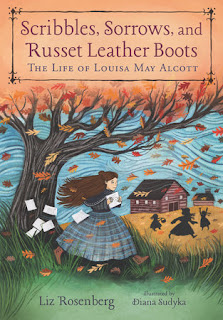 Q: How would you describe Alcott's role in her family, and how did she develop her sense of responsibility?

A: Well, Alcott was, as she declared, "the man of the family." By the time she was 11 her father had more or less given up that role. He was still a guide for her, a gentle, loving presence, a moral pole-star, but in terms of day-to-day responsibilities-- well, Louisa was already taking that on in her very early teens.

Her ambitions were not for herself so much as to support her family. They were often near starvation, they moved 30 times before she turned 18. She stood in the face of actual wolves at the door. Her earnings-- from sewing, making doll's hats, "going out to service" as housekeeper; and of course in her writing, helped save the family and keep it afloat. The Alcott family was a matriarchy; the women pulled the heavy load of daily life.

Q: How did you research the book, and did you learn anything that especially surprised or intrigued you?

A: I researched Louisa in many ways, from original materials and manuscripts to letters and journals and earlier biographies.  I write about my favorite discovery within the book. It came from an early draft I found in the Concord Free Public Library-- a revised scene between Laurie and Jo. Let me tell you, when I read it I let out a little shriek that must have alarmed the librarian.

Because the Alcotts had this truly remarkable web of friends the book took a long time to research. Almost every important connection was a fascinating character in their own right. For instance, one of her father's closest friends was Ralph Waldo Emerson; he was a salvation to the Alcott family. Henry Thoreau was Louisa's first natural science teacher. She lived next door to Nathaniel Hawthorne. The list goes on and on.

A: Am currently working on a few things-- a novel for adults; a long fantasy story for children; a collection of Louisa May Alcott's best essay writing for Notting Hill Editions, a beautiful press based in England. I am thrilled about that!

A: I find it fascinating that Louisa had such high hopes but such low expectations for herself. She was, after all, the peculiar daughter of the even more peculiar Bronson Alcott. She sold her first story for $5 and was thrilled by the windfall. She considered every possibility for employment and tried many of them--becoming a laundress, a maid, an actress, a teacher, a seamstress, and finally earning her bread as a writer.

It's not really possible to talk about Louisa without talking about her family-- she and her three sisters formed "The Golden Band." They seldom attended public school. They played together, worked together, wept together. Marmee really was Marmee, with a bit more fire and a bit less brimstone. And Bronson in her early childhood, was the great light they all moved around. So insofar as every life story is a love story, Louisa's is very much a family love story.