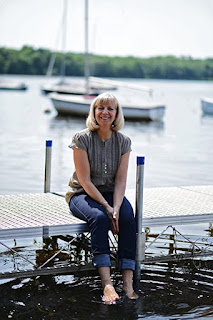 Cheryl Blackford is the author of Fossil Hunter: How Mary Anning Changed the Science of Prehistoric Life, a new biography for older kids. Her other books include Hungry Coyote. She lives in Minnesota and Arizona.

Q: What inspired you to write this book about fossil hunter Mary Anning?

A: The original inspiration was a 2014 Google doodle on what would have been Mary Anning’s 215th birthday. Even though I have a degree in geology I’d never heard of Mary Anning and as soon as I saw that doodle I wanted to know more about her.

The more I read, the more I learned how remarkable she was. She carved out a successful science career for herself at a time in England when women weren’t allowed to formally study the sciences. She found some of England’s most important fossils and worked with the best geologists of the time and yet she’d never even been to school. Her life is an inspiration and I wanted to tell her story.

A: I was born in England and most of my extended family still lives there so I was able to fit short research trips into family visits. I visited Lyme Regis (the small seaside town where Mary lived) twice to soak in the atmosphere of the places where Mary would have walked and to hunt for fossils on the beach with the Lyme Museum geologist, Paddy Howe.

I also visited several libraries and museums in Oxford, Cambridge, London, and Bristol to talk to experts, and see Mary’s papers and fossils. I was sad to find that very few of her personal papers have survived – she was an uneducated woman and therefore not considered important enough for them to be saved. I read books about her and the geologists she worked with and many of the old scientific papers written by those men.

The biggest surprise for me was what a talented artist she was — her tender sketch of her dog Tray is simple and beautiful. She meticulously sketched her fossils as a sales tool to encourage wealthy people to buy fossils from her. 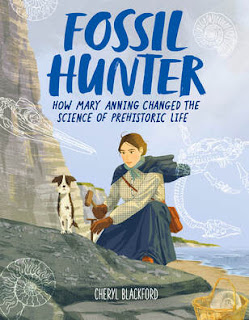 Q: During her lifetime, how was Mary Anning viewed by the scientific community?

A: Geologists and wealthy fossil collectors knew Mary was an expert on Lyme Regis and its fossils and often consulted with her. They also knew she was fit and strong and could guide them on fossil hunting expeditions.

But despite being good friends with eminent geologists such as Henry De La Beche and William Buckland, Mary didn’t receive the formal recognition she deserved because she was a poor, uneducated woman. Her name was often omitted when geologists wrote papers about the fossils she’d found and when her fossils were given to museums it wasn’t Mary’s name on the labels but the names of the men who’d purchased and donated them.

Q: What do you see as her legacy today, and what do you hope readers take away from the book?

A: Science in 19th century England was dominated by wealthy men but Mary didn’t let that stop her — she was determined to make her living doing what she knew best. She also didn’t let a lack of a formal education hinder her work— she simply made up for that lack by reading and conducting her own research.

So I see Mary as an inspiration and role model to young people, and especially girls, who are interested in science. Mary’s dogged persistence and determination to overcome societal and physical barriers can inspire today’s young scientists to persevere despite hardship.

Today Mary is celebrated around the world — books are written about her and she was the subject of a recent film starring Kate Winslet. She has also inspired a young girl — Evie Swire — to begin the Mary Anning Rocks campaign to erect a long-overdue statue of Mary in Lyme Regis.

A: I write in several different genres so I’m currently working on two nature-themed picture books as well as a fantasy novel for middle-grade readers. The novel has pirates, mermaids, a talking cat with magical eyes, a sad dragon who loves music and several characters who are not what they seem. Are you intrigued?

I also have another fascinating woman of science I’d like to write about when I’m able to do the research.

A: Please visit my website www.cherylblackford.com for updates on events, Mary Anning-related materials, and, soon, an educator’s guide. You can also find information about my other books there. I’m also on Instagram (cherylblackford) and Twitter (@BlackfordBooks).