Claire Douglas is the author of the new novel Just Like the Other Girls. Her other novels include Do Not Disturb. Also a journalist, she lives in Bath, England.

Q: What inspired you to write Just Like the Other Girls?

A: I read an article about the Craigslist Murders in the U.S., which was about a man who advertised for single guys with no family ties to work on his ranch but then when they arrived he would kill them. However, I wanted a more domestic setting with women, rather than men, who were being lured to their deaths.

The characters of Elspeth and Kathryn and their complicated relationship came next and the rest grew from there.

Q: The book includes a number of point-of-view characters as well as chapters set in different time periods. How difficult was it to keep track as you were writing?

A: I always write my books in chronological order and so each character telling their part of the story felt natural and in keeping with the plot as it progressed. But I did go back over the first draft after I finished the book and edited each character’s narrative separately to make sure their voices stayed individual and distinctive.

Q: How would you describe the dynamic between Kathryn and her mother, Elspeth?

A: I think their relationship is very strained, with each of them harbouring resentments towards the other. 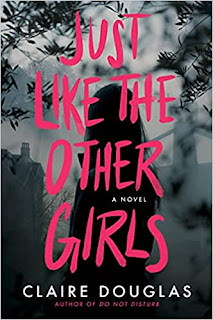 Kathryn feels a sense of duty towards her mother, but she is also suffering a lot of hurt from her childhood and feelings of never feeling good enough for Elspeth. This has made her grow up to be a very brittle and secretive woman, but underneath it all she has a big heart which I hope comes across in how she interacts with her own children. She’s determined to give them the love she felt she never had growing up.

Kathryn was one of my favourite characters to write because she is so complicated.

Q: Why did you choose to set the book in Bristol?

A: I grew up in a town not far from Bristol and the area around the Clifton Suspension Bridge has always fascinated me because it’s so beautiful but also so rugged, with its jutting cliff edges and the Avon Gorge.

The suspension bridge itself is very old and iconic to Bristol, and I thought it would be a great setting for a thriller due to its magnificence but also how atmospheric it is. It’s very high up so looks wonderfully eerie on a foggy night.

A: I’ve just finished my eighth book, which is due to be published in the UK in September 2022. It’s a thriller about four teenage girls travelling in a car after a night out along a notoriously haunted road when it crashes. The driver, Olivia, is unconscious for around five minutes, but when she wakes up, she’s shocked to find herself alone in the car. Her three friends have disappeared.

Twenty years later, journalist Jenna Halliday arrives in the town to make a true-crime podcast about the strange disappearances of Olivia’s friends, but someone knows what happened that night and they are determined that Jenna doesn’t find out the truth.

A: My next book to be published in the US and Canada is The Couple At Number Nine, which is out in August 2022. This is about a young couple, Saffy and Tom, who inherit a cottage from Saffy’s grandmother, Rose, only to uncover two bodies buried in the garden when they begin renovations.