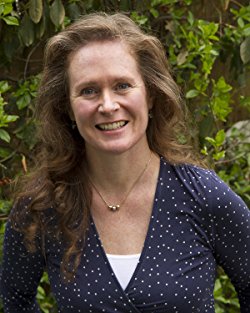 Kate Hannigan is the author of the new children's picture book A Lady Has the Floor: Belva Lockwood Speaks Out for Women's Rights. Her other books include The Detective's Assistant. She has worked for The Dallas Morning News and the San Francisco Chronicle, and she lives in Chicago.

Q: Why did you decide to write a picture book about women's rights activist Belva Lockwood?

A: When Belva Lockwood first came to my attention, I was researching a book about Nellie Bly. I was so surprised to read about “the lady candidate” that I dropped the Nellie project and jumped right into learning about Belva and her campaign for president in 1884.

A: Belva was articulate and a prolific writer, which makes the researching so much easier than for projects where the subject didn't record their own thoughts and opinions. I was able to dig up old newspaper articles where she'd granted interviews, as well as read her own writings about life and law and politics. 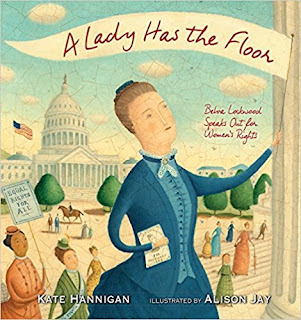 I learned so many things that should not have come as a surprise but did: that she was asked to teach school at age 14 but was paid only half what the men earned.

That she wanted to go to college after being widowed as a young woman but her father said an education would be wasted on her.

That she had to fight to be allowed into law school, and that even after earning her diploma the school still refused to give it to her.

That despite having the law degree and practicing in the courts as a full-fledged attorney, judges pounded their gavels and ordered her to be silent—they would have nothing to do with “lady” lawyers.

On and on and on, the injustices she encountered were jaw-dropping but part of what women faced as they changed society's norms.

Q: What do you think Alison Jay's illustrations add to the book? 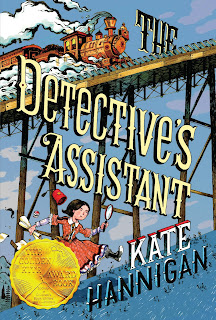 A: Holy cow, Alison is so talented! I want to hang her illustrations on my walls! She gives the book an uplifting tone through her vibrant colors and whimsical figures. And her “crackle” (or whatever technical art term you’d use for that antique finish!) lends just the right feeling—that we’re looking at something historical.

Alison is such a pro! It would not be the same book without her gorgeous art. I feel like the universe smiled on me when I was paired with her!

A: I hope readers take away a sense of strength and inspiration from Belva’s story. That no matter what obstacles line your path, you can still reach your goals and even surprise yourself!

Belva just wanted what was fair—that girls get the same opportunities to lead full and satisfying lives as boys. So she pushed boundaries, all the way to the Supreme Court and even the White House.

“Let nothing stand in your way,” would be the mantra Belva imparts to young readers. Though she’s infinitely quotable already in her own writings and campaigns.

A: Oh my, how I love a good story of an amazing woman. I just finished the Nellie Bly manuscript and sold it to the same editor who worked on the Belva book! Carolyn Yoder at Boyds Mills Press.

And I’m happy to say that a middle-grade World War II project I’ve been writing and researching for about two years now has found a home. More details to come on that, but I’ve got lots and lots and lots of stories in various stages of contemplation and completion! And I can’t wait to get them out into the world!