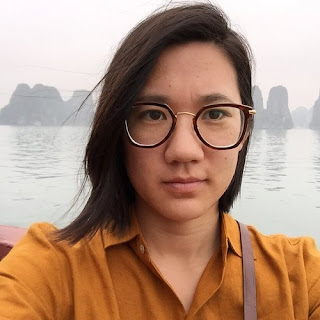 Diana Khoi Nguyen is the author of the new poetry collection Ghost Of. Her work has appeared in a variety of publications, including Poetry and American Poetry Review. She lives in Denver, and is a doctoral candidate in creative writing at the University of Denver.

Q: How did you come up with the title of your poetry collection, and what does it signify for you?

A: The title came from a friend. We’re actually not friends any more. The former friend had read a different version of the manuscript with completely different poems. There were many different kinds of shades or forms, and they recommended I title it “Ghost Of.”

I liked it because it felt incomplete, like the fragmentary identities that come to our mind. A couple of years later, I decided to write the poem “Ghost Of.” It was funny that the title gifted to me engendered a poem. It became central to how I thought of the book.

There are skeletons in the closet in any family, there are things you’ve done that haunt you. And beyond the family, it’s the Vietnam War. Everybody has ghosts.

Q: You’ve written about your late brother and the impact his absence has had on your work. How difficult was it to write these poems?

A: Some were not difficult. Actually I tend to play things down. The most difficult thing was working with the family pictures. For two years after his suicide, I couldn’t go near his room.

Everybody grieves in different ways. I wanted to be as far from physical reminders as possible. My father took to wearing his shoes, his hat. I felt numb for a long time. I felt guilty for feeling numb. 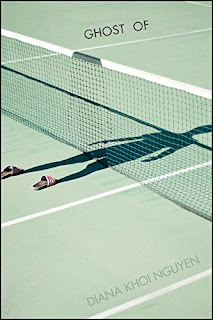 I was faced with the reminder of what he’d done, and knowing the artifacts he left behind had this power, I wanted to work against and do something with the images. I wanted to reach him and fill him in.

There were all these feelings that finally opened me up. That was the hard part. I finally grieved. It also felt so good to free that from me. The other poems were hard, but don’t deal with it directly.

The hardest thing is reading the poems out loud to people. It’s such a private thing. I worry—I’m not trying to perform grief. I know most people have lost somebody, and I bring them to that space of grief, but it speaks to people. It’s a form of connection I find valuable.

Q: You mentioned the Vietnam War—what’s been the impact and the legacy of the war on you and your family?

My father’s story was quite simple—on the day the war ended, he and his family went to the U.S. embassy and got on a plane because his father worked for the embassy.

My mother never wanted to talk about it. My parents are very forward-looking. They own multiple properties in California, they both got their master’s. I don’t know why she finally felt she could open up about it….

I started to become acutely aware of the nuances around me. I had experienced racial slurs. It came to a point that this was not okay. I wanted to push back, and I wanted to know who my parents were. I felt she had undiagnosed PTSD. The war ended when she was about 16, a formative time as a teenager.

She finally shared a hard story. It was really sad. She was from a large family, one of 11 children. They ran a local pharmacy in Saigon. My grandfather worked for the embassy as well. They were told to bring your family to the embassy, and my grandfather was really prideful and didn’t think the South could lose the war.

My eldest uncle was studying abroad. [My grandfather] took his youngest son, and left his daughters and wife behind to run the family business. The gender dynamic is important. My grandmother, mother, aunts were left behind.

The way this was told is that one aunt escorted her father and brother to the embassy, and they realized it was a big mistake in not taking the whole family, but it was too late. I try to imagine my grandfather when he realized that.

My mother describes the insane chaos in Saigon, teenagers haphazardly driving tanks down the street. When the Communists took over she had to go to a reeducation camp.

They kept trying to escape. It was a big risk. My grandfather was sending back gold. You didn’t know who you could trust. They ended up on a rickety boat, and made it to a refugee camp in Malaysia. And they finally came over. There were so many moments when they were almost caught. They were living in constant terror.

When I learned the story, I had sympathy and empathy for my mother. I didn’t know how she could do everything she did here. It helped me understand. It made me think about the people who didn’t make it.

My dissertation project is to travel to the diaspora in this country [and others] and record how they tell the story, and examine how people assimilate. There’s always a [refugee crisis] happening.

Q: Over how long a time did you write these poems, and how did you decide on the order in which they would appear?

A: My brother died in 2014. The title was there before that. It happened really fast. I didn’t decide to write with the pictures until July 2016. I write in summer and winter. I wrote it in August and December 2016. The book was picked up in 2017.

The book just poured out of me once I figured out how to access that part of me. Ninety percent was written in 30 days. I plan, I prepare, and I don’t see anybody for 15 days.

I printed everything out, and then I knew I wanted three sections. I like the prime numbers, the imbalance. A beginning, a middle, and an end. There also were three siblings, now there are only two of us…

A: The cover makes me happy. Tennis is crucial to our family, and it’s an homage to this tradition in my family. In Asian households you don’t wear shoes in the house, and the sandals encapsulated our family culture.

--Interview with Deborah Kalb. This Q&A also appears on www.hauntinglegacy.com.
Posted by Deborah Kalb at 7:48 AM