Elle Marr is the author of the new novel Strangers We Know. Her other books include Lies We Bury. She lives in Oregon.

Q: You note that your mother's own adoption story and your use of a DNA test were among the inspirations for Strangers We Know. Can you say more about that, and about how you created your character Ivy?

For Ivy, this motivation spurs her to take a genetics test, which leads her to connect with her first cousin in Washington state.

Like me, Ivy is also Chinese-American, and I wanted to explore her background as a woman of mixed-race. That is, how cultural conflicts led her to become the person she is, and in how her upbringing and her adoptive family provided her with the confidence and stability she needed to explore the unknown parts of her history.

A: Absolutely. I was surprised to learn how commonly believed it is that the full moon can make us do all kinds of things. Perfectly rational individuals commit crimes, act out of character, and even resort to violence, supposedly according to the lunar phase.

This idea drove much of the speculation that occurs in Strangers We Know, as it relates to the Full Moon Killer and their cadence for murder. 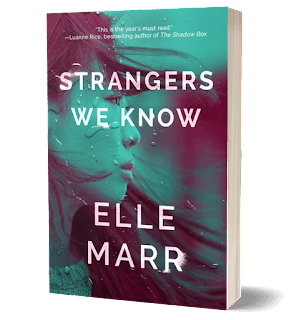 I also found it interesting—perversely, in a way—at how many serial killers in real life often have normal, mundane routines. This both haunted me, in that I think about these double lives far too much, and it pushed me to create appropriately complex villains in Strangers We Know.

For more sound research, I relied on such great nonfiction titles as The Killer Across the Table, The Stranger Beside Me, and I’ll Be Gone in the Dark.

A: I wanted a title that evoked the anxiety one might feel upon meeting biological family for the first time as an adult. Strangers We Know accomplished that by paradoxically alluding to the previous history and relationship one might have with a yet-unknown relative.

Q: The writer Georgina Cross said of the book, “Told from multiple points of view, Strangers We Know is about more than Ivy learning of her past and, shockingly, the serial killer within her family; it’s also about knowing who to trust and how to discern who’s telling the complete story.” What do you think of that description?

A: I think it’s great! I’m such a fan of Cross’ suspense thriller novels, and was excited when she agreed to blurb Strangers We Know.

Her point, that Strangers is about knowing who to trust and how to discern the complete the story, is exactly what I was aiming for as I was writing it. Being related to someone by blood does not equate to undiluted trust; nor does growing up with someone in the same household necessarily mean they belong to the intimate circle that’s considered family.

A: I’ve just turned in my edits for my fourth thriller, The Family Bones, which comes out on March 7, 2023. It’s a locked-room mystery set in the rural backwoods of eastern Oregon, where a family retreat among psychopaths goes horribly wrong. Readers can pre-order it now!

A: I’m so excited for readers to follow my protagonist on her journey to the Pacific Northwest. Fans of true crime will hopefully get a kick out of this real-world-inspired story. Thanks very much for this fun Q&A, Deb!