Courtney Maum is the author of the new novel I Am Having So Much Fun Here Without You. She divides her time between the Berkshires, New York, and Paris.

Q: How did you come up with your main character, Richard?

Well, I didn’t have to search very far for him—impulsive, selfish, fun-loving—his voice is pretty close to my evil inner id’s!

I’d probably have to find a therapist to help me understand my motivation, but I usually write from a male’s point of view. I think it has to do with spending 14 years in an all-girls school in Connecticut. My narrative voice is still in a state of shock.

Q:  Why did you decide to set the book at the beginning of the Iraq War?

A: I was living in Paris myself before the Iraq War broke out and thus was exposed to a different political climate than I might have been in the United States. I was able to look at my country’s decisions from an outsider’s viewpoint, which, in time, probably prepped me to observe the institution of marriage objectively, too.

But regardless of the continent one was living on, it was a messy, unpredictable, heartbreaking time in history, sentiments that are echoed in Anne and Richard’s relationship as it falls apart. 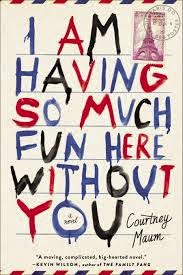 Q: Did you know how the book would end when you started writing, or did you change it along the way?

A: I didn’t know! Anne was a wild card. Even though the book is written from Richard’s point of view, it is Anne, and Anne’s decisions, that drive the story forward. Richard is the mess maker. Anne’s the super-strength solution finder, the quicker picker upper.

A: There are so many! The three books that really made me want to try and write a novel were Jonathan Franzen’s The Corrections, John Kennedy O’Toole’s A Confederacy of Dunces, and Martin Amis’ The Information. In general, I love to read contemporary fiction with a wry sense of humor: A.M Homes, Deb Olin Unferth, Michel Houellebecq, Ned Beauman.

A: I’m toying around with two non-fiction projects; one is a memoir I’ve been writing since I found out I was pregnant. My goal is to keep going with it until my daughter turns one. I think this will be a private, or semi-private book that I will only gift to her. The other is a little satire thing that I’m not sure what I’ll do with.

Meanwhile, I have another novel percolating in my mind, but I’m not rushing it. I’m allowing it to drip very slowly, like fat, thick, Turkish coffee.

A: Because I was an aspiring writer up until about two minutes ago, I feel a tremendous amount of kinship to anyone and everyone who hasn’t been published yet.

That’s why I like to share the story of this manuscript’s journey. I actually wrote it 10 years ago, long before I was married. It went out to 18 editors and garnered 18 rejections.

It was a heartbreaking experience for me, and thus, the manuscript spent the rest of the decade in a box above an armoire until my current agent, unconvinced about the saleability of the project we were working on together, asked me if I had anything else and convinced me that I needed to give this old story another shot.

I tried to improve the writing by reworking the structure, but it was too frustrating and hard. In the end, I just wrote the entire thing over from scratch with the same characters and time period, but vastly different content.

It was tough work, but after 10 years, I can tell you that the reward feels very, very sweet!