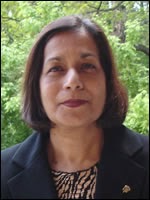 Mubina Hassanali Kirmani is the author of the children's book Bundle of Secrets: Savita Returns Home, a winner of the 2014 Children's Africana Book Award, and the co-author of  Wandering Wind and Oral Literature of the Asians in East Africa. She is a professor at Towson University's College of Education in Maryland.
Q: Your book Bundle of Secrets is based in part on your own experiences. Why did you decide to write it, and how did you combine history and fiction to tell Savita's story?
A: The book Bundle of Secrets: Savita Returns Home, which won a Children’s Africana Book Award for Best Children’s Book for 2014, is about the little girl Savita whose ancestors are from India but she herself was born and raised in Kenya.
The book begins with Savita bidding farewell to her relatives in Mumbai and heading back to Mombasa, her hometown. She, together with her mother and baby brother, Raja, are sailing on a big boat -- dhow -- across the Indian ocean on a journey that takes several days carrying “a bundle of secrets,” the contents of which get revealed when she finally reaches her home in Kenya.
My ancestors also took a similar journey at the turn of the 19th century, traveling across the ocean to make a home on the East Coast of Africa. The book is a picture book -- fiction for children ages 6-12 -- and draws from my ancestral history and traditions from India and personal experiences having been raised in Kenya. 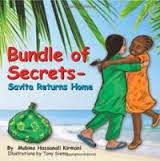 I decided to write the book for several reasons.
First is to break the stereotype about Africa, which is often thought of as a continent with a homogeneous society. It is a continent made up of many countries with different people and cultures. Migration started in Africa well before Columbus discovered America.
I have relatives who settled in Kenya, Uganda, and Tanzania. There is diversity both within the indigenous African populations and amongst those who settled there from various parts of Asia, Europe and the Middle East.
Second is to help children appreciate ancestral traditions and new customs of their adopted home. Often when families migrate there is a sense of loss of home, culture, and traditions. Children are sometimes caught in conflict between parents imposing their own traditions and values and children wanting to be part of the main culture. 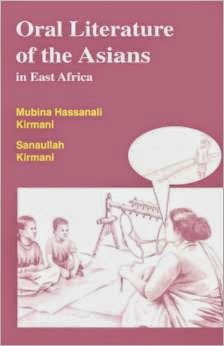 Savita's story helps to build a bridge between cultures. The book celebrates cultures from both India and Kenya with reference to language, songs, games, food, and clothing.
Children will experience these cultures as they read the book while trying to figure out what is inside the bundle of secrets. The book is universally applicable as families continue even today to migrate into the United States and other parts of the world.

Third, the story is about friendship between children across race and culture. Often race is thought of in terms of  mainly black and white. But Savita's story is about friendship between an African child, Njeri, and an Asian Indian child.
When I was born in the 1950s Kenya was still under British rule. The school system was segregated and I went to an all-Indian elementary and secondary school. The first time I could intellectually and socially interact with a Kenyan African was not till I went to college and university.
The book aims to show how children from different cultural and racial backgrounds can play and work together. I wrote the book also to honor a 40-year friendship between me and my friend Jerry Okungu, who recently passed away.
Q: Your work has focused on issues of multiculturalism, and on teaching multiculturalism in the classroom. What are some of the issues that are most important for classroom teachers to highlight with their students?

A: Historically, the United States has been a country of migrants both voluntary and involuntary, and since the 1960s, migrants have come mainly from parts of Asia, Africa, the Middle East, Africa, and Latin America. This has resulted in increasing diversity in classrooms. The biggest challenge for teachers is how to educate children from different cultural and religious backgrounds.
There are, however, theories on child development and learning that can help guide teachers on how to address the differences in classrooms. Abraham Maslow’s theory, for example, talks about the hierarchy of human needs and the importance of meeting these needs in order for a child or student to reach its full potential. After the basic needs of food, water and shelter, Maslow talks about the need for love, belonging, and self-esteem.
Teachers need to create an inclusive learning environment so every child feels loved and cared for. This in turn impacts the child’s sense of self-esteem and productivity.
Books can be one great way to present different cultures and ways of life in positive ways. The book can be a mirror where the child sees itself and feels acknowledged and it can also be a window that helps a child to appreciate other cultures.
Q: One area that you've looked at is how different religions can find common ground. What have you found, and are you hopeful that more can be done to bring people together?
A: Apart from cultural diversity, there is an increase in religious diversity in classrooms. Because of separation of church and state we do not teach religion, but as teachers we need to be mindful of children from different religious backgrounds in order to meet their needs and also prevent bullying against children who may practice their religion in a certain way. 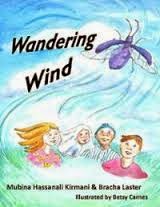 My colleague, Dr. Bracha Laster, and I have written the book Wandering Wind, which focuses on different religious dress codes and includes a Jewish, a Christian, a Muslim and a Sikh child.
The purpose of this book is to bring tolerance between children of different faiths without imposing any specific religion. And yes, much more can be done by involving families in schools so they can share their backgrounds and stories so children can become familiar with different religious and cultural practices and learn to live with differences.
Q: What are you working on now?
A: The book Wandering Wind is the first in the series of books that I plan to write with my colleague. I look forward to continuing to work on more books to bring religious and cultural tolerance using some of the other natural elements such as water, light, and earth, which are universally shared by all.
Q: Anything else we should know?
A: As an educator who trains teachers I am aware of the importance of books that represent diversity of children in classrooms and homes. There is a real shortage of books with children of color, as was also pointed out in the recent article in The New York Times Sunday Review, Where Are the People of Color in Children’s Books?
I have been writing my books with this in mind and wish to encourage other authors and publishers to produce more books that portray children from diverse backgrounds in positive ways.
--Interview with Deborah Kalb