Bruce Rosenstein's most recent book is Create Your Future the Peter Drucker Way: Developing and Applying a Forward Focused Mindset. He also has written Living in More Than One World. He is the managing editor of Leader to Leader, and he worked at USA Today for more than 20 years. He is based in the Washington, D.C., area.

Q: Why did you decide to write a book focused on Peter Drucker's ideas about the future?

A: I have long been fascinated with Drucker’s ideas on the future, which are not well understood, and had not been collected and curated into one convenient book until now. I contend that his forward-focused mindset was a major contributor to his success.

My contribution is to erect a framework around these ideas so readers could put them to use inside and outside the workplace. I’ve also added value by suggesting ways Drucker’s ideas can be put into practice in today’s highly uncertain world, and by including an extensive resources section of books, articles and websites.

Q: You write, "Drucker pointed out that, although making the future was highly risky, not trying to make the future was equally or more risky." Why did he believe that, and how did he use that idea in his own life?

A: This is especially relevant at work, for both individuals and organizations. There is continual change in the world, meaning never-ending challenges and the need to organize your work and life for constant change.

Risk will not go away, and has to be accepted and perhaps turned into a future-oriented opportunity. Making the future requires thought and work. There is a great quote illustrating this from his 1974 book Management: Tasks, Responsibilities, Practices: "The future requires decisions-now. It imposes risk-now. It requires action-now."

Drucker took a big risk as a young man, in the 1930s, when he left his job as an asset manager of a bank in England, to immigrate to the United States without a clear-cut idea of what his new career would be.

This was on top of the fact that he was born in Austria and went to college and grad school in Germany, so English wasn’t even his first language, though of course his command of it was formidable.

He started freelance writing (including some work as a foreign correspondent for The Washington Post), then added college teaching and eventually consulting. He continued these activities concurrently until he died in 2005 at 95.

Q: One of your chapters is titled "Become Your Own Successor." How can people accomplish that, and do you think Peter Drucker was able to do so?

A: Drucker’s life and work inspired me to devise this concept a few years ago. It is somewhat metaphorical and you can’t necessarily take it literally. There are several ways to consider it; perhaps getting a promotion within your current organization, or redefining or reinventing your current job.

People can become their own successors by diversifying their efforts and outputs, developing a powerful personal brand, having a global worldview, remaining relevant throughout life, developing a consistently impressive body of work and being involved in work that benefits others.

Drucker did all of the above, which contributed to his long record of success. For instance, not only did he strive to remain relevant deep into advanced age, but his ideas are still relevant nearly 10 years after his death. And his body of work remains impressive: his books still sell well, and he is quoted on social media practically minute-by-minute. 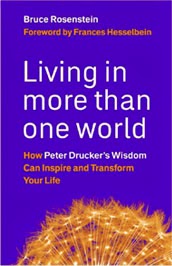 Q: Do you see this book as something of a sequel to your last book, or can each be read independently?

Although I don’t view the new book as a sequel, it is somewhat of an extension of Living in More than One World. However, they can be read independently and you don’t have to be familiar with that book to enjoy Create Your Future the Peter Drucker Way.

There is a chapter in the first book about the future, but I’ve approached the concept in a much different way in the new one. And while Living in More than One World quoted only Drucker, this time I also interviewed and quoted a variety of thought leaders whose work is consistent with and related to Drucker’s, such as John Baldoni, Jesse Lyn Stoner, Jason Womack and Sally Helgesen.

A: I’ve been writing a number of articles and guest blog posts related to how people and organizations can create the future. I’m also working on consolidating ideas and concepts from both books into a workshop that can be taken into workplaces, professional associations and schools.

A: Since 1996, I’ve been an adjunct professor in the library and information science Master’s program at the Catholic University of America. My next teaching semester starts on July 1, and the beginning of a new semester is always a promising, exciting time for me, and I hope for my students as well!