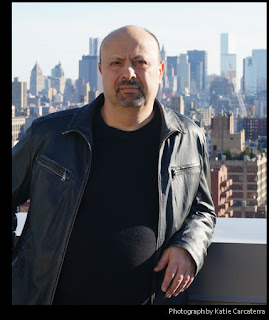 Lorenzo Carcaterra is the author of the new novel Nonna Maria and the Case of the Missing Bride. His many other books include Three Dreamers. A former writer/producer for Law & Order, he lives in New York City.

Q: You said in our previous interview that Nonna Maria in your novel is based on your actual Nonna Maria. Was it easy to turn her into a fictional detective?

A: No, not at all. I always think of her--fictional or in life--as a real person and treated her that way in the novel. She has Nonna's habits; looks like her; dresses like her; talks like her; cooks like her and drinks coffee by day and wine by night.

The only changes I made were to keep her in present day (Nonna died in 1975) and have her help solve crimes. The real Nonna was always there to help a friend in need so even that wasn't much of a stretch. And both the real and the fictional Nonna are great cooks--yet we never see them eat and she will never drink anything not from her kitchen.

They both also never drink water and hate flowers (as Nonna often said about flowers--"I don't want anything in my house that dies in three days.").

Q: How did you come up with the novel's plot?

A: That was the difficult part--coming up with crimes, especially a murder, on an island that has very little, if any crime, especially a murder. But I knew the crimes had to be linked in a personal way to Nonna and that was the key step. Then, it became much easier to come up with who needed her help and how she would go about working the cases.

Q: The story takes place on the island of Ischia. How important is setting to you in your writing?

A: Ischia is as much a character in the novel as Nonna Maria. I have been lucky to have my family roots there and have visited the island since I was 14. I have written portions of all my books there and written a number of magazine pieces about the island. It fascinates me to this day and on each visit I discover something new about the island. 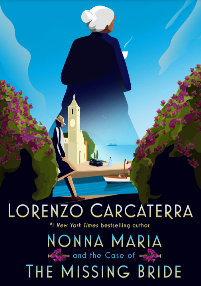 Ischia is much different today than it was when I first visited. It has its own rhythm and the people are already well-drawn out characters. It is a place of beauty and magic but full of folklore and superstitions. It is, to me, a crucial and key element of the book.

Q: What do you think the real Nonna Maria would think of the novel?

A: I think she would get a kick out of it. She wouldn't want any fuss made about her, but would enjoy the attention it would get from her friends on the island. It would give her something to talk about with them over a cup of coffee or a glass of wine. But she would not take it seriously.

I doubt she would read it--but would know all about it from friends and family. I would get a great meal out of it, for sure.

A: The second Nonna Maria book--Nonna Maria and the Case of the Stolen Necklace.

A: That a number of the bits in the novel are based on family stories I was told since I was 14.

The man who drank something and ended up married to a woman he didn't know and didn't realize it until he was on his honeymoon--that was, allegedly, my uncle--was told to me and my young cousins as a warning not to drink or eat anything given to us by strangers.

And many of the characters in the book are based on real people I have known since I was a boy--Silvio Rumore, the boat captain, was a dear friend who sadly passed away last year.

The King of the Port is my Uncle Mario--who was among the first to realize who a tourist goldmine Ischia could become. He started with one cab in 1966 and by the early 1980s owned a fleet of cabs and buses; hydrofoils; tour boats; hotels; restaurants.

He's 91 now and simply by having his last name, I've been treated to countless free drinks in bars and restaurants by owners who always claim that if it weren't for him, Ischia would still be a quiet island with no tourists.