Jennifer Saint is the author of the new novel Elektra, which focuses on ancient Greek mythological characters. She also has written the novel Ariadne. A former high school English teacher, she lives in Yorkshire, England.

Q: Why did you choose to focus on Elektra, Cassandra, and Clytemnestra in your new novel?

A: The myths of the Trojan War are so prominent in Greek mythology and a source of endless intrigue and fascination. I really wanted to tell some of the lesser-known parts of the stories and to see this legendary, bloody, drawn-out conflict through different eyes – the eyes of the women left behind facing their own battles while the men went to fight on the Trojan beaches.

Clytemnestra, Elektra, and Cassandra are three powerful women in ancient mythology who have been maligned or disbelieved. They’ve all been wronged and all are unafraid to take action and do what they think is right – whatever the cost.

That made them characters who were irresistible to explore and ones who I really felt deserved the chance to tell their side of the stories which define them throughout history.

Q: The Publishers Weekly review of the book says, “Out of a canonical myth, Saint has built a commanding story of rebellious women.” What do you see as the relationship between the traditional stories and your own interpretations of these characters?

A: I was always very struck by the way that Clytemnestra is compared in the Odyssey to her cousin Penelope. While Penelope is praised for her faithful endurance while Odysseus is away at war and his subsequent travels, Clytemnestra is condemned for her infidelity and treachery against her husband.

Odysseus and Agamemnon, however, are never compared as husbands – so often, women are pitted against one another in a way that men aren’t.

I wanted to widen my view of her as more than just her role as a wife. She’s motivated by a deep maternal love along with fury and desire for retribution. She is strong, compassionate and clever as well as ruthless and merciless when she needs to be.

Similarly, I wanted to delve more deeply into what drives Elektra. In the ancient tragedies where she features as a character, she is already a grown woman who bears a terrible grudge against her mother that she cannot reconcile.

I wanted to fill in the gaps of her life to discover what had driven her to that point and what more there was to her character than her seething hatred. I felt like there was a very complex personality to be uncovered and some sympathy for her despite her actions. 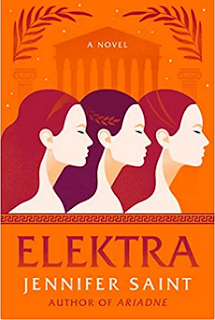 Cassandra, meanwhile, is a very tragic figure in mythology: cursed to see the future but never be believed and to be dismissed by those around her as a hysterical madwoman. She displays such strength, however, in her determination to keep trying to save Troy from the fate she foretells and although her story is a sad one, I wanted to draw out her courage and fortitude as well as her anguish.

A: This novel took a lot of research – the Trojan War has been written about extensively and there are many sources that present the characters and some of the major events in the novel that I drew from.

A great deal of the story comes from Aeschylus’ trilogy, the Oresteia, as well as the tragedies by Sophocles and Euripides both titled Electra. But I also referenced the Iliad and the Odyssey along with Ovid’s Metamorphoses and several other sources.

One of the most surprising things about the story was something I heard when first studying it 20 years ago though and it really stuck with me! I remember being told in college that when Agamemnon brings Cassandra back from the Trojan War as his captive, Clytemnestra is consumed by sexual jealousy.

I’ve never been able to reconcile this in my mind, given how much Clytemnestra despises her husband. I couldn’t see how she would in any way be jealous that he’s taken a slave and is flaunting her. Disgusted and angry at how awful he is, yes. Sympathetic even to the unfortunate woman, maybe. But jealous? I don’t think so.

That sense of confusion I felt at 18 on hearing this lingered and was something I really wanted to address in the novel, presenting it in a way I found more convincing.

I think it comes back to the idea of women being pitted against one another in competition which didn’t ring true for me – I’m more interested in finding the ways in which women find strength and solidarity in each other where I can, although of course when it comes to Clytemnestra and Elektra’s relationship, perhaps the scars just run too deep.

Q: What first intrigued you about Greek mythology?

A: I’ve always loved Greek mythology and I think that it came from some of my earliest and most favourite childhood memories of going on family holidays to Greece.

My parents would always take us to visit ancient ruins and tell us the stories and I was captivated by the sense of connection to the past, that we could see the foundations of what they had built three thousand years ago and how the myths were still as fascinating and compelling and exciting all these centuries later.

There is something so special about being a part of that chain of storytelling which has endured for so long and still resonates so strongly with us today.

A: I’m working on my third novel about an amazing heroine of Greek mythology: Atalanta. She’s unique in the legends as the only woman to take part in a heroic quest when she joined Jason and the Argonauts and her story is a really thrilling epic tale!

A: My first novel, Ariadne, is out in paperback. Elektra will be out on 3rd May and I’m very excited that Barnes & Noble are doing an exclusive edition of Elektra, including a bonus scene!