Lily Chu is the author of the new novel The Stand-In. She lives in Toronto.

Q: What inspired you to write The Stand-In, and how did you create your character Gracie?

A: In late 2019, there were a lot of issues about representation bubbling up in the romance world. I already knew that there weren’t a ton of biracial characters in books, but I realized that I’d become so used to it that I didn’t even expect to see people like me in stories. So The Stand-In, and by extension, Gracie, came out of a decision to try to change that.

Gracie as a character was inspired in part by my own experiences, and those of people I know, as well as her own amazing self as I committed her to the page.

A: When I write, I have a very general idea of where I want to take the story. I’m not fond of plotting, so I usually write a five-to-10-page outline as a guide. One of the lines in the outline is always “And then some stuff happens and they fix the problem” and I leave the nitty-gritty of how that’s going to happen for Later Me to worry about. 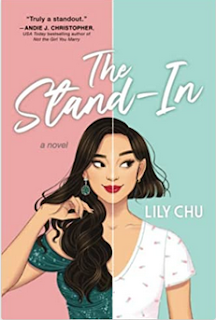 For The Stand-In, I made a variety of changes from draft to draft, and then more changes once I started working with my incredible editors at Audible and Sourcebooks. But it’s hard to describe them without spoilers!

Q: How did Phillipa Soo end up recording the audiobook of The Stand-In, and how would you describe her performance?

A: Audible came to me and said, We think Phillipa Soo would be a perfect narrator. I wasn’t about to argue, in part because I was too busy fangirling. Her performance was extraordinary. She captured Gracie’s personality to a T, and it added another layer of both brightness and depth to the text.

A: Different readers will take away different meanings. Some may be happy to see people who look like them, and have families like theirs, on the page. Some may feel seen in the discussions of mental health. Others might be looking for a fun read to escape into for a few hours.

I hope that at the end, a reader can put the book down and be satisfied with how they spent the time with the characters.

A: I finished writing my second book, The Comeback, in the fall. It’s about an ambitious and rigid Toronto lawyer who falls in love with a K-pop idol. That will be out in audio this July and I can’t wait for people to hear it, and then read it in print in 2023.

Right now, I’m deep in writing my first draft for a third book, about a diversity and inclusion consultant, that’s set in the world of luxury fashion. But I just started, so who knows where that idea will take me!

A: Although Eppy is not a planner in the real world, I wish it was! It’s based on a system I created for myself on Excel. I am a huge planner nerd. I love them and at the same time, am on an eternal hunt for one that does everything I want.