Lorenzo Carcaterra is the author of the new book Three Dreamers: A Memoir of Family. It focuses on the lives of his grandmother, mother, and wife. His many other books include Payback. A former writer/producer for Law & Order, he lives in New York City.

Q: Why did you decide to write Three Dreamers, and how was the book's title chosen?

A: I had been thinking of writing the book for a few years. And thinking about the many ways the three women--my Nonna, my mother and my wife--impacted my life.

The more I gave it thought, the more I realized how much of an effect each, in their own individual way, had on my becoming a writer. That was the through line that linked the three of them--or one of the through lines.

Their stories and my life journey with each one, are what anchor the book. And I decided to share those stories because each of us, especially men, have been impacted in a strong way by the women in our lives. All you need to do is reflect on it a bit to come to that realization.

The book originally had another working title which didn't quite fit. I love the title Three Dreamers. It is exactly what each of them were--for me. Wishing and dreaming for me to have a much better life and a life that I very much wanted to live.

Q: The Publishers Weekly review of the book says, "This emotional narrative isn’t for the fainthearted, but its beauty is a thing to behold." What do you think of that description?

A: It's very flattering, of course. If that's the feeling a reader gets after finishing the book, then I feel as if I have done the job I set out to do. And I have given the Three Dreamers the justice, truth and power they deserve and have earned. 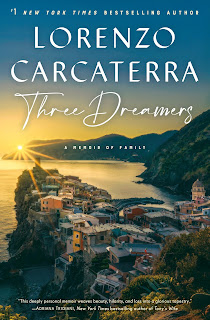 A: It helped me better understand my mother. Her life here in America was not pleasant--difficult and abusive marriage, constant debts, very few days of peace.

She tended to be more negative than positive, but those negative reactions pushed me even harder to succeed at what I was attempting to do.

In the course of the writing, I realized how many of her lessons have stayed with me--the weight of the stories she told; the Italian movies she took me to see and the impact they each had on me.

My Nonna's section revealed how, over the course of seven summers, the words, the simple acts and the love of a wonderful woman have never left me, not even after many decades have passed.

And for Susan--it brought back the pleasant memories of how we met and fell in love and how, despite the years of struggle, she never wavered in her belief that I would achieve what she always believed I would. There really is no stronger love.

It was great to spend time with the three women again, to bring them back into my life and to know, that they will never leave me. They will always be a part of me.

Q: What do you hope readers take away from the stories of each of the women you write about?

A: Most of all, the love they each had for me. And to embrace the wonderful and sometimes painful stories they told. The strength of their character and the dignified way they lived their lives. That would mean a lot. How important they were and remain to me. I think about them every day.

I also hope their stories and their lives will make a reader reflect on the women in his or her own life--mothers, grandmothers, wives, sisters--who have impacted them in meaningful ways.

A: I'm on the second draft of a novel called Nonna Maria and The Case of the Missing Bride, which will be out next year at this time.

My editor and publisher were so taken with the real Nonna Maria in Three Dreamers that they thought she would make a terrific fictional character. At first, I had some doubts. But writing the book has been a pleasure.

Nonna Maria, it turns out, has all the instincts of a good detective. If Miss Marple wore the widow's black, drank way too much coffee and wine and had more friends and contacts than she could count, she could easily hang with Nonna Maria. The novel is set in Ischia and it was fun to be back on an island that means so much to me.

A: On the business end, one of my earlier books--The Wolf--has been optioned by Amazon Studios for producer Lorenzo Di Bonaventura to be developed as a feature film.

On the personal side, now that I am fully vaccinated and recovered from a December bout with Covid, I can spend more time with my first grandson, Oliver Lorenzo. He's a year and five months and what they say about grandchildren is true--they do change your life. For the better.