Dianna Rostad is the author of the new historical novel You Belong Here Now. It focuses on three children on an orphan train in the 1920s who end up in Montana. She lives in Florida.

Q: What inspired you to write You Belong Here Now?

A: I had read a CNN article online and the pictures of all the orphans from the 1920s hanging out of trains and standing on platforms looked familiar to my eye.

I had worked with youthful offenders after the riots of the 1990s in South Central Los Angeles. It was my job to get them employed when they were paroled.

Like the kids on the streets who were rounded up by The Children’s Aid Society and put in orphanages and onto trains to the heartland and West, the kids on my caseload didn’t have significant adults, and I rarely met a parent.

It was always the same story, one parent missing and the other in jail. Some of them were raised by a grandmother or an auntie. Like the orphans riding the train West, the kids on my caseload had to make their own way and got into gangs like the Crips and the Bloods.

They had done terrible things to survive, much like my Charles in You Belong Here Now. Charles was a young man living on the streets of Hell’s Kitchen; the gangs wanted him, but he wanted a better life.

When I went to write my orphan kids from the streets of Hell’s Kitchen, I was prepared and understood the mindset and the backgrounds of these kids. Most importantly, from working with them, I knew they still had hope.

Q: The novel takes place in the 1920s in Montana--how important is setting to you in your writing?

A: Landscape is everything to me. I like to recreate the place and time as accurately as possible. Montana itself was the big draw for me. One Christmas my father drove down to Texas and he brought a bunch of old photos of the family ranches in Montana, and stories about how his family lived in this beautiful, but unforgiving land.

One picture I always remember is of my grandfather’s old ranch house with a small windmill on the top of it. My grandfather had written a note that he’d put that windmill on there as a boy, hoping it would power just one light bulb—and it did for a time.

All these photos broke open a whole big world where I could see my characters falling into place. I decided then to set my book in Montana. 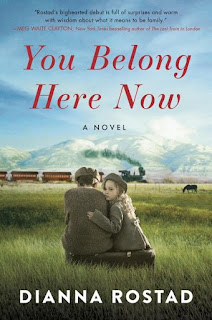 A: There were so many facets to this book, and the research spanned many years. The what, where, and when are all major chunks of research for historical novelists.

I began by reading several books on the orphan train, and then I scoured the internet. From there, I did a pretty deep dive into the history of the early 20th century to discover what were the macro issues of that time?

World War I, The Spanish Flu, Prohibition, and Women’s Rights all had to be researched in order to bring this book into the wider movements of 1925. Who wrote books, literature during this time? What was popular? What did people wear in 1925 Montana?

The backstory on my orphans was important, so I researched 1920s Hell’s Kitchen and all her inhabitants, tenements, and specifically the gangs and their activity.

I traveled to Montana to research the landscape and went to all the museums and historical societies where I talked to historians and recovered oral histories from Cheyenne and other inhabitants.

From there, I researched all the indigenous cultures, and then The Battle of The Little Bighorn to understand the attitudes that still existed between people in 1925. It was important to me to place everyone and everything in this book that existed there in that time.

The funny thing about research is that it usually leads to more research, which I don’t mind. My family’s history was an important part of framing what this life looked like in 1920s Montana. My aunts helped me greatly here by finding the old songs, stories, and pictures.

The songs in the book came from my grandfather’s repertoire and were commonly sung in that time. My father and uncle helped me with old cars of that era, shotguns and rifles used then, how they were loaded, cocked, and shot.

The other two important aspects that had to be researched were cattle ranching in this time and wild horses.

For me, the eye-opening part of my research was discovering that we’ve made no progress on how we manage the wild horse population in the West.

They were rounded up in 1925 and canned into chicken feed, and today they are being rounded up, put into tiny holding pens, and if they aren’t adopted, then they are sent across the borders to be destroyed and likely used for animal feed.

The government and ranchers treat them like invasive species. When it’s really beef cattle that destroy our land. When cows graze on native grasses, their stomachs destroy seeds. Whereas wild horses and bison don’t.

I’ve read research by Yvette Running Horse Collin that proves they are indigenous creatures, though the popular Eurocentric myth is that they were brought here by the Spanish Conquistadors.

A: Hope. That even children coming from the streets that have done terrible things, can learn how to love and live in a family, a healthy one.

A: A book set in 1900 San Francisco. It will be something like True Grit meets The Secret Garden.

A: I will always write big-hearted novels for all ages and genders. I will take my readers on epic journeys, and the landscape will always be a big character.