Celia Jeffries is the author of the new novel Blue Desert. Her work has appeared in a variety of publications, including Westview and Solstice Literary Magazine.

Q: How did you come up with the idea for Blue Desert, and for your character Alice?

A: This story was like a stray cat who kept showing up at the door. Actually, it was a “voice” that appeared in writing I was doing in response to a Georgia O’Keeffe painting of the desert.

That voice and the desert began to appear in other writings, and eventually I trusted that this was a character and perhaps a setting. It was as if this character appeared and insisted I write about her, so I did, with no idea where it was going.

I began with the first line from that O’Keeffe response as the opening of the story. By the time it became a novel—after many, many rewrites—I assumed the line was long gone. But when I was doing a final proofread, there it was, in the middle of the book (!).

A: When I began writing this story I had never heard of the Tuaregs of the Sahara. At a writing retreat a French woman heard me read some pieces and said “Oh, you’re writing about the blue men,” and told me about the desert tribe.

I began reading about the Tuareg at the same time I was reading about World War I, and was fascinated by the how the world was completely reshaped by the events of that time.

Blue Desert is a work of imagination, but I knew I needed to know the sounds, the smells, and the flavors of the world I was writing about. 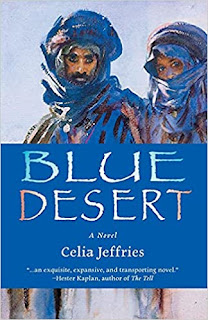 I watched films and documentaries that had been made in the Sahara and listened to music from that world and, once I completed a first draft, I went to Morocco on an “adventure tour” that included a five-day camel trek through the Sahara.

I didn’t really want to make that trip alone, but it ended up that I did, which was opportune. If I was afraid to go into the desert alone, imagine how my character felt?

What surprised me was that the desert could be as peaceful and beautiful as I had imagined. Although I knew it had once been an ocean, I was still stunned to come across a seashell completely sheathed in the red sand of the Sahara. Camels fascinated me, but riding one is definitely not for the faint of heart.

Later, after another revision, I put the book aside while I served two years in the Peace Corps, where I was posted to Botswana. Another opportune moment. It wasn’t the Sahara, but it was Africa and a desert community.

Q: The book takes place in the 1910s and also in 1970. Did you focus more on one time period before turning to the other, or did you write the novel in the order in which it appears?

A: My early drafts focused on Alice’s time in the desert and her interactions with her family when she returned.

I knew it was a frame story, with Alice looking back at her time in the Sahara, but I didn’t write the 1970 sections until recently. My writing has always been character-driven, and the story didn’t start to come together until Martin’s character began to take shape.

A: I love books that open up the world in a new way and help us to understand the human condition. If Blue Desert provides a bit of that experience for my readers I would be very happy.

A: I am working on a three-strand memoir, braiding together my experience as an “older volunteer” in the Peace Corps, my life in exile in Canada during the Vietnam War, and a family secret that was revealed by a DNA test.

A: The cover of Blue Desert is a sketch John Singer Sargent made on his travels in Africa during the same time period of the novel.