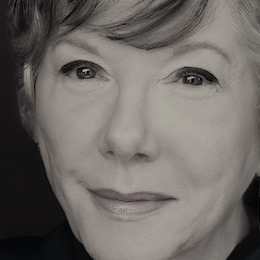 D.Z. Stone is the author, with Dieter Vaupel, of the new book A Fairy Tale Unmasked: The Teacher and the Nazi Slaves. It focuses on the impact of the Holocaust on a town in Germany. She also has written the book No Past Tense.

Q: How did you come to work with Dieter Vaupel on this new book?

A: To celebrate the publication of a dual biography I authored, No Past Tense: Love and Survival in the Shadow of the Holocaust, a presentation took place at the Jewish Community Center in Redondo Beach, California, in December 2019.

As the subjects of the book, Kati and Willi Salcer, had passed away, Rabbi Zalman Gordon suggested we concentrate on one aspect of the book: Kati Salcer’s story about being sent from Auschwitz to work in a vast underground munitions factory in Germany and her story not being quite believed, until Dieter Vaupel.

After the war the existence of the factory was wiped from the historical record but thanks to the German teacher Dieter Vaupel and his students in uncovering their town’s hidden Nazi history, Kati’s memories were eventually validated.

I contacted Dieter about the JCC event. Working with a local television station, he made a short documentary film (https://www.youtube.com/watch?v=sUpbrqMgJ-o) that featured German students reading and reenacting scenes from the memoir of Blanka Pudler, a survivor who had been in the same place as Kati Salcer.

After the event I asked the publisher of No Past Tense, Vallentine Mitchell—they also brought the world Anne Frank’s diary—if they would be interested in publishing an English version of Blanka’s memoir.

Since this memoir was written in collaboration with Dieter, I also sent some of the remarks I wrote about him for the JCC event.

Seeing what Dieter had done, the publisher suggested a two-part book with the first part about how Dieter and his students uncovered their town’s Nazi history even though they were threatened to stop looking. I started working on Part One on the second day of Covid lockdown in New York. 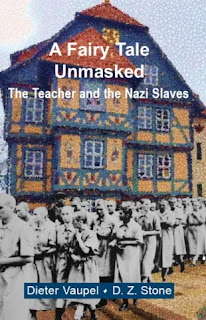 A: The title was chosen in an email back and forth between Dieter and myself.

We both made suggestions and early on settled on liking “Fairy Tale” in the title as the German town of Hessisch Lichtenau is not only an idyllic place of half-timbered houses and castle ruins but also home to one of the Brothers Grimm most popular fairy tales, Mother Hulda.

The “Unmasked” refers to what goes on beneath the bucolic surface, and the subtitle, “The Teacher and the Nazi Slaves” refers to Dieter’s work with the 1,000 women and girls sent from Auschwitz to Hessisch Lichtenau.

Q: What impact do you think Dieter Vaupel and his students had on their community and its understanding of its past?

A: I cannot speak directly about the community as I have never been to Hessisch Lichtenau due to Covid, but from Dieter I know that their influence has been great.

After the initial waves of resistance and people not wanting to know anything about the Nazi past, people looked to establish forms of remembrance. A memorial stone was set up for the Jewish woman and girls as well as a memorial path on the grounds of the former munitions factory.

They even went so far as to invite former slave laborers to Hessisch Lichtenau for a meeting.

As Michael Berenbaum, the professor, author, and rabbi specializing in the study of the Holocaust, noted in the foreword for A Fairy Tale Unmasked:  “Remarkably, facing its past has proved liberating for many townspeople, not only uncovering the evil of the past but the all important and all too rare cases of solidarity and decency, the remnants upon which a different future can be built.”

Andrea Simon, author of Bashert: A Granddaughter’s Holocaust Quest, summed up the impact of the meeting where she wrote in an online review, “You will rejoice in the redemptive power of compassion between the victims and townspeople—and the dedication of one ‘righteous’ teacher.”

Dieter says that even today pupils and teachers from the local schools as well as the political parties and Michael Heussner, the current mayor of Hessisch Lichtenau, are looking for more forms of remembrance.

Recently a working group, including Dieter, met for this purpose. Their aim is to set up a memorial and a museum in one of the former factory buildings where people were forced to work under dire and lethal conditions.

A: That people should not stop searching for the truth even when threatened to stop looking. It was almost 40 years after the war and it was still difficult to bring the forgotten Nazi past in Germany to light—and not only for Dieter and the students in Hessisch Lichtenau.

Many places in Germany kept secret and suppressed their past so Hessisch Lichtenau was not unusual. Dieter believes it was mostly because of young people with the courage to ask brave questions that the past was uncovered in many places in Germany in the 1970s and 1980s.

Dieter is emphatic that it is important to remember the dark Nazi past so people can recognize what can lead to hatred, racism and inhumanity, and prevent it from happening again.

For me, I hope the reader will come away recognizing the quiet heroism of a teacher in seeking the truth and in his honoring a group of Jewish women and girls sent to his town from Auschwitz.

A: I am working on projects that are completely different from my books on aspects of the Holocaust. I am writing fiction that (I hope) is both poignant and funny.

I recently had a short story accepted by a venue I had really wanted to get into—I cannot announce it officially yet. I am also working on a screenplay adaptation of my unpublished novel for the production company Burgeon & Flourish.

A: Because of Covid, Dieter and I never met in person to work on the book. We exchanged hundreds of emails and I was able to write about his work because of his impeccable research and recordkeeping. Also, the wonderful translation of Part Two of the book, the memoir of Blanka Pudler, is by Dieter’s son Julian.

Working with Dieter was the collaboration of a lifetime. I hope my telling his story in a small way thanks him on behalf of the Jewish women and girls sent to Hessisch Lichtenau.

I know first-hand from Kati Kellner Salcer and Judith Magyar Isaacson, and more recently from Eva Moreimi, the author of Hidden Recipes and daughter of another Lichtenau survivor, how Dieter’s work deeply impacted these women and for many was life-changing.