Mariah Fredericks is the author of the new mystery novel Death of a Showman, the fourth in her Jane Prescott series, set in the 1910s. Fredericks lives in New York City.

Q: What inspired you to create your character Jane Prescott, and did you know from the start that you'd be writing a series about her?

A: This is going to sound very creative artist woo woo, but Jane came to me. I had no intention of writing a historical mystery. I was writing contemporary young adult when one day, the first two lines of A Death of No Importance came to me: I will tell it. I will tell it badly.

And there was something about that line I will tell it that implied this was a story that had been told many times before, but everyone else had gotten it wrong. Now, after decades of silence, this woman was going to set the record straight.

The fact that she apologized told me she was not used to being heard and someone with tact. So, over time, the idea of a servant who knew the truth about a famous “crime of the century” developed. And Jane’s voice just got stronger and stronger as I wrote. I sort of think of these books as her stories; I’m just the typist.

I did not know it would be a series. When Minotaur bought No Importance, they asked if I would consider doing a series. I told them truthfully that I would be happy to spend the next few decades writing Jane Prescott. I’m very happy so many readers have grown attached to her.

Q: How did you come up with the plot for Death of a Showman?

A: Originally, the story in Showman was supposed to be for book five. Jane and the Tylers would return from Europe where Charlotte’s wedding has taken place and war has broken out, to find that Jane’s ex-boyfriend is on the verge of opening his first show—and has gotten married. Which he said he would never do. 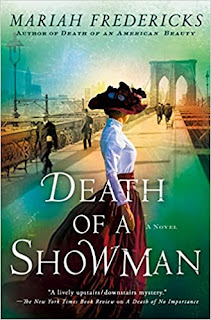 The murder itself is based on a true crime; if I reveal the details, I’ll reveal whodunnit. But that was in place from the start.

There were some non-mystery areas of suspense: how will Jane react to Leo getting married? Will William accept Louise’s growing independence?

Beyond that, it was a matter of coming up with scenes that blended detection and theater lore, such as Jane and Louise interviewing a taxi dancer at Rector’s to learn what he knows about the secret life of the murdered producer.

Q: This is your fourth novel about Jane--do you think she's changed over the course of the series?

A: I would say in the first two books, Jane is very focused on doing a good job, protecting the Benchleys, boosting Louise—she’s a young lady determined to do things correctly. Partly because she’s a dedicated professional and partly out of insecurity.

When she encounters cruelty or injustice, her response is anguished, but maybe a little flailing: But that’s…wrong!

In the last book, Death of an American Beauty, the violence strikes much closer to home. Her uncle is accused, she herself is attacked.

And in book four, she has much more clarity and certainty in her thinking about brutality. She doesn’t defer as much.

There’s a scene in Showman where she and Michael Behan go to a seedy dive called the Nag’s Nose to talk to a suspect. Michael isn’t getting anywhere with the guy and Jane says, Step aside, I got this. She pretends to be a woman who wants to hire someone to kill her lover. Book one Jane never ever would have done that.

Q: How do you research your books, and have you learned anything especially fascinating in the course of your research?

A: Mike Wallace’s Greater Gotham: A History of New York City from 1898 to 1919 is my bible. It’s astonishingly researched and beautifully written. I don’t know how he wrote one of these books, let alone two, in one lifetime.

I start by googling New York City and the year, just to see what comes up. Once I have the key elements of the story—theater, weddings, Tammany Hall—I go on a book-buying spree. I use digital newspaper archives a lot, because it’s always good to see how people viewed the events of their day. It’s not the same as our perspective.

That perspective is actually one of the most fascinating things I’ve absorbed. Until just a few days before war is declared, the Great War is absent from the front page of The New York Times. The murder trial of Florence Carman was the story gripping the city at that time.

I grew up thinking pre-World War I America was somewhat stuffy and old-fashioned; the ‘20s were the time of great innovation and liberation.

But women were bobbing their hair in the 1910s—and fighting for the vote at the same time. It was a wildly optimistic, bold, creative time. Yes, we had many problems, but we were making big changes to address those problems. When I step away from the era, I miss it.

A: I have two books underway at the moment. Jane 5, which is a turning point book in the series. William opens his own law practice and engages Jane as his secretary. They get involved investigating the explosion that killed Michael Behan’s father. Strangely, Michael is less than thrilled when Jane starts looking into his family’s past.

But my next book is going to be a standalone, a true crime novel focusing on one woman’s perspective of a famous crime of the 1930s. It’s one of those stories when you trip over it, you think, Oh, my God, why has this not been done before? Let me do it right now!

A: I think if a writer is having fun, the reader will have fun. (Conversely, if a book is hell to write, I think you feel it on the page as a reader.) I had a blast writing Death of a Showman. I hope the reading experience reflects that.

And as we come out of hiding, please remember your local bookstore!