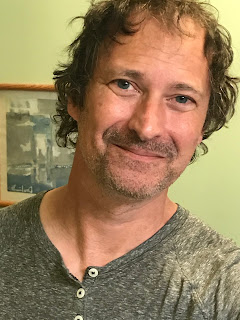 Darrin Doyle is the author of the new story collection The Big Baby Crime Spree and Other Delusions. His other books include Scoundrels Among Us. He teaches at Central Michigan University, and he lives in Mount Pleasant, Michigan.

Q: How long did it take you to write the stories in your new collection, and how did you choose the order in which they'd appear on the book?

A: Each story took four to six months to complete, so I guess that would total about two years. I was actually asked by Wolfson Press if I had 100 pages of short fiction that could form a collection, and I found five stories from different periods in my life (some old, some new) that featured similar themes, voices, and moods.

The editors gave me arrangement suggestions for the order (the collection originally opened with “The Odds,” for example, but the editor thought the narrator of that one was less sympathetic than the narrator of “The Kaleidoscope,” so we switched it around).

Basically, I followed the editors’ lead, and I love what they suggested. This order walks the reader from normalcy into the dark and delusional regions of the psyche more gradually, so by the time you realize what’s happening, it’s too late. 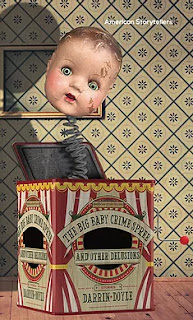 Q: The writer Christine Sneed compared your work to that of filmmaker David Lynch. What do you think of that comparison?

A: I’m very flattered by this comparison because I’ve been a huge David Lynch fan since I saw Eraserhead as a teenager. I don’t consciously try to make stories like a Lynch movie (or like anyone, for that matter), but some influences just get into your blood.

I admire Lynch so much for being a pure artist who never seems to care about commercial success. He does what he does, and there’s nobody else like him.

There aren’t many people who have an adjective based on their name: it’s pretty much just Kafka and Lynch. When someone says a work of art is “Lynchian,” we know it means off-center, quirky, surreal, darkly funny, and yet grounded in a core of realism. I can only hope to ever attain such a singular vision as David Lynch.

Q: Do you usually know how your stories will end before you start writing them, or do you make changes along the way?

A: I never know where my stories will end. I either start with a premise or a voice (or both). I never have a plan for the plot until I sit down and write.

When I get a little further into the story and begin to find the conflict(s), then of course I start to envision what might happen, but if I don’t surprise myself while I’m writing, then I don’t feel like the reader will be surprised either.

I know some writers who want to know the endings before they begin, but I can’t do that until I know who the characters are.

This doesn’t generally crystallize until deeper into the story, and then, if the story’s a keeper, the ending usually falls into place – with hopes that it feels, as Flannery O’Connor said, “surprising yet inevitable.”

A: Above all, I want readers to be entertained. By this I mean I hope they find the sentences compelling or the characters interesting (or maddening) or that there’s some humor or strangeness or other emotion that they can connect with. I just want them to keep turning the pages, intrigued by what might come next.

Beyond that, I hope they laugh; I hope they’re surprised; I hope they’re a little scared and concerned. This collection has a haunted baby doll, a gambler who bets on his own grandmother’s death, a street-chalk artist who stalks his models, and a hospital janitor who hopes to kidnap newborn babies.

Maybe the reader will take away more questions than answers, but I believe that’s what the role of art is – to raise questions about what it means to be a person, why people do the things we do, how we process grief and loss, and so on.

A: I’m ecstatic to announce that I have a second book coming out in 2021. I still can’t believe it myself.

But this next book is a comedy-horror novel called The Beast in Aisle 34, and it’s about a guy named Sandy who works at Lowe’s, is married, has a baby on the way – and also is a werewolf.

His family lives in rural Michigan near lots of wooded land, so he believes he can satisfy his werewolf needs each month by eating the local deer. Of course, things don’t turn out the way he plans…dark humor and terror ensue.