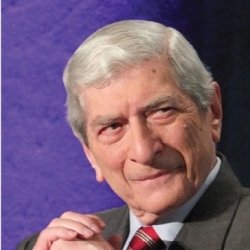 Marvin Kalb is the author of the new memoir Assignment Russia: Becoming a Foreign Correspondent in the Crucible of the Cold War. His many other books include the memoir The Year I Was Peter the Great. A former longtime correspondent for CBS and NBC, he is a nonresident senior fellow at the Brookings Institution in Washington, D.C. I'm proud to say that he is also my father!

Q: This is your second memoir, following The Year I Was Peter the Great. Why did you decide to write this new book?

A: When the first memoir came out, I thought it might be the last one, but there were a lot of favorable comments about the story I tell of a young American in Russia in 1956. I was working at the U.S. embassy, which allowed me to be at various meetings. I was able to meet with top Soviet leaders, including Nikita Khrushchev. He nicknamed me Peter the Great.

I was given the opportunity to work at CBS News, as their Moscow correspondent. The story is so compelling. Russia in the Cold War was an eye-catching headline. People kept asking me what was going on there, so I decided to write the second memoir.

Q: Do you think young journalists today could have any similar experiences to yours of 60 years ago, or has the world changed too much?

A: In one respect they can. Russia remains an incredibly interesting story. Whether it’s led by Khrushchev, Putin, or Gorbachev, it’s a terrific front-page story.

In another respect it would be radically different: the changes in technology. We had to send all our copy through a government censor. They could eliminate the story, throw us out of the country, or clear it.

Now, that’s not the case. With iPhones, iPads, new technology, reporters can use it to advance their study of Russia. The story of Navalny would never have been possible in the old days. Now it’s possible with social media. 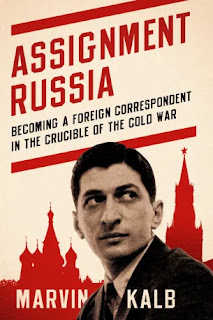 Q: The Kirkus Review of the book says, “Kalb’s fond, generous memoir, which vividly delineates a bygone era of early journalism, will appeal to students of 20th-century American history as well as aspiring broadcast journalists.” What do you think of that assessment, and what do you hope readers take away from the book?

A: I hope readers will enjoy the excitement I felt at that time in Russia. I wrote in the book that this could be considered a long letter home after an exciting experience. I wanted the book to be an opportunity to share the excitement I felt, anticipating going to Russia, being in Russia, and covering so magnetic a political leader as Nikita Khrushchev.

In this respect, he was a very modern leader—he loved being on television, being the center of attention, giving interviews to foreign correspondents.

To the degree that I’m able to convey the excitement of covering Russia, I have succeeded as a writer.

Q: Often when I ask people about their memoir, I ask what their family thinks of it. Obviously that’s not something I will ask you because I know we all really love the book! But I will ask how you decided on the amount of personal information you included in the book.

A: The book is a memoir. It’s my story. My story in the years 1957-61 was absorbed with two major issues. One was personal and one was professional.

On the personal side, I met and married Madeleine Green, a recent Wellesley graduate absorbed at Columbia with the pursuit of a Ph.D. in Soviet studies. She was as much part of the story as anything I was covering. So she had to be in the book, and I’m delighted to include those elements of the Russia story that the two of us discovered. It was not just my discovery.

Second, I spoke at some length in the book about the role my brother Bernard played in my selection of a specialization like Russia and a career like journalism. He is an essential part of the story of my life at that time, and he played a major role in the book.

A: I do have another memoir in mind. It’s pretty well sketched out in my mind. It will be a continuation of the story of a journalist covering the Cold War. It was one of the most dangerous periods in world history. I was very fortunate to have a job as diplomatic correspondent for CBS and NBC. At both networks, I was able to cover the highlights of the Cold War.

One possible title for the new book would be Highlights. I look forward to writing it, finishing it, and having you all as readers!

A: There’s one point I would like people to bear in mind. This book for me was my way of saying thank you to the United States for welcoming my mother and father in the years before World War I. They both came from Eastern Europe, and had suffered forms of religious persecution.

They came to this country hoping it would live up to the advance billing among many Jewish immigrants from Eastern Europe who thought of the country as a golden paradise.

In many ways, my parents were not disappointed. Nothing was easy, but they were given the opportunity for economic advancement and religious and political freedom. The book is my way of saying thank you to this country. I’m “paying back” with this memoir.

--Interview with Deborah Kalb. Here's a previous Q&A with my father.